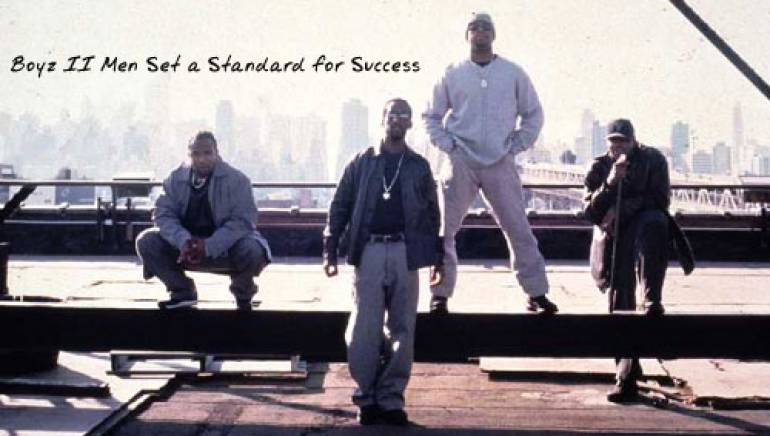 If imitation is the sincerest form of flattery, then Boyz II Men should feel honored by the "boy band" craze that has blossomed in their soulful wake.

Indeed, N' Sync, Backstreet Boys and a host of other teen acts have successfully co-opted Boyz II Men's silky harmonies, funky choreography and earnest balladry. But while these newer acts have certainly proven their commercial viability, most have yet to win the peer respect Boyz II Men captured with their 1992 debut album, Cooleyhighharmony. In the eight years since that groundbreaking recording, Boyz II Men has sold over 34 million records worldwide, earned numerous awards (including four Grammys), shattered sales records and established themselves as undisputed heirs to the '60s R&B legacy.

Now, following a lengthy hiatus, Nathan Morris, Michael McCary, Shawn Stockman and Wanya Morris have emerged to reclaim their place in the modern pop pantheon. As its title implies, Boyz II Men: Nathan/Michael/Shawn/Wanya is the work of a musical democracy. The disc, which debuted at number four on the Billboard pop album chart in early fall, was executive produced by the group. The first single, "Pass You By," was composed by Shawn. Tracks like "Dreams" and "Lovely" demonstrate the quartet's mastery of soul balladry, while "Beautiful Women," "Good Guy" and "Bounce, Shake, Move, Swing" are urgent dance-floor salvos. Says Nathan Morris: "Everything on this record is us. It's our personalities and hopefully because there's so much of us on this CD, people will be able to feel it and know us."

Comprising former students from Philadelphia's School for the Performing Arts, Boyz II Men got their big break when they slipped backstage and performed a cappella for New Edition's Michael Bivins. The New Edition singer was so impressed that he helped the quartet secure a Motown Records contract.

That backstage encounter resulted in one of the most astounding success stories in contemporary pop. Cooleyhighharmony was a bona fide phenomenon. It spawned the hit single "MotownPhilly," sold over 12 million copies and stayed on Billboard's pop chart for over a year. The title track earned the group a Grammy for Best R&B Performance by Duo or Group with Vocals. The single, "End Of The Road," which appeared on the 1992 Boomerang soundtrack, became one the biggest-selling singles of all time, surpassing Elvis Presley's "Heartbreak Hotel" for length of stay in the number one spot.

In 1993, the talented foursome showcased their patented harmonies on the platinum-selling Christmas Interpretations. In 1994, Boyz II Men extended their winning streak with the release of II. The album debuted at number one, yielded the hits "I'll Make Love To You" and "On Bended Knee," and nabbed Grammys for Best R&B Performance by Duo or Group with Vocals and Best R&B Song. To date, the album has sold over 16 million copies worldwide.

But following a 1997 world tour, Boyz II Men's went into self-imposed exile. During the three-year break, the group oversaw the construction and operation of StoneCreek Studios, a state-of-the-art facility in Gladwyne, PA. Wanya established his own label, while Shawn formed a movie production company (his short film for Showtime, 17 Again, which he produced and co-scored, earned critical acclaim at this year's Acapulco Film Festival). Michael logged in hours at StoneCreek, while Nathan oversaw much of the group's business affairs.

Yet despite their personal pursuits, the group's focus remains unchanged. "Boyz II Men is all we know," Shawn laughs, "because we've been doing it for such a long time. It's our main passion and it's what we do better than anything."