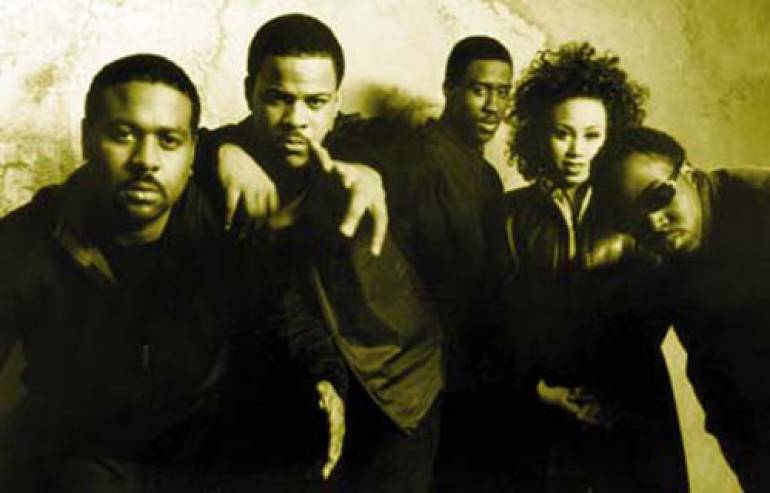 "Hip-hop can be everything. Hip-hop can be limitless." That's the declaration made by Antra/Artemis recording artists The Spooks on the release of their debut album, S.I.O.S.O.S. Volume 1. The initials stand for "Spooks Is On Some Other Script," and the album certainly backs that contention. Drawing from hip-hop, trip-hop and alternative rock, to name just a few musical strains the group embraces, it's a challenging and intelligent expansion of rap music's breadth and lyrical concerns.

"I guess if you have to categorize what we sound like or what our music is called, it would be conceptual hip-hop or ethereal rap," says vocalist Ming Hia, whose airy voice wafts through and around raps by her four MC bandmates: Mr. Booka-T, Water Water, Hypno and Vengeance. Behind their often socially conscious commentary can be heard all sorts of instruments mixing with the samples usually used in hip-hop, like the flute that threads its way through the album's first cut, "The Mission."

The group's first single, "Things I've Seen," is a hypnotic and, ironically, rather delicate musical track iced with politically charged lyrics. It caught the ear of actor Lawrence Fishburne, who features the song in the soundtrack of his upcoming directorial debut, Once in the Life.

Adept at live performance as well as in the studio, the Spooks seek "to boldly take hip-hop where it damn well oughta be by now," their bio proclaims. Building on the progressive hip-hop pioneered by acts like the Fugees and The Roots, The Spooks keep the focus on the music by keeping most of their personal details mysterious. Taking their name from the cult book and movie The Spook Who Sat by the Door, the members reveal little of their own origins other than saying they come from the eastern half of the United States. But the diversity of their music augurs a universal appeal for the Spooks.

"We're all over the map because we're hard to pin down," explains Water Water. "We're making music that comes from the shadows."