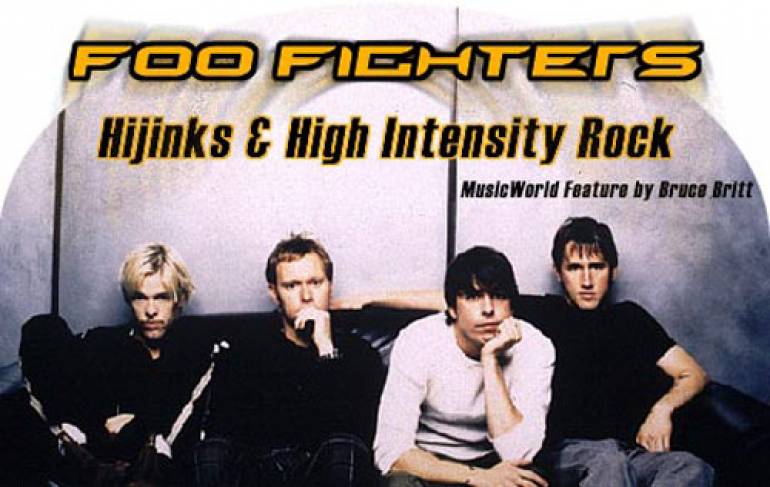 Bittersweet and hopeful, the title of Foo Fighters' latest album could be perceived as a reference to the band's origins. There Is Nothing Left to Lose certainly sounds like a statement of resignation following the death of Nirvana singer/songwriter Kurt Cobain. Foo Fighters was founded when Nirvana drummer Dave Grohl embarked on a solo career after Cobain's demise. Having since proved his skills as a bandleader and singer/songwriter himself, Grohl has transcended his grungy past while preserving his historic place in rock history.

Since rising from Nirvana's ashes in 1995, Foo Fighters have released three platinum-certified albums, including their self-titled debut and their 1997 sophomore effort, The Colour and the Shape. The band has been hailed for its hell-raising performances and off-stage hijinks. Indeed, the group's videos successfully replicate the madcap mischief of The Beatles' Hard Day's Night.

In recent months, Foo Fighters have made uproarious appearances on the Tonight Show with Jay Leno, The Daily Show and MTV's Total Request Live. The band's video, "Big Me," was a hilarious send-up of the Mentos mints commercials, while their "Learn to Fly" clip featured the group portraying passengers on a surreal plane ride - including Grohl as a blushing bobbysoxer.

But while Grohl and his comrades rarely pass up an opportunity to clown around, the quartet performs with dead-serious rock intensity. Foo Fighters consists of some of the most revered young musicians in modern rock, including former Alanis Morissette drummer Taylor Hawkins. Bassist Nate Mendel was plucked from the celebrated art-rock band Sunny Day Real Estate. Guitarist Chris Shiflet completes the line-up. Under Grohl's leadership, Foo Fighters has morphed into a pop-rock band reminiscent of Cheap Trick and the Cars.

Foo Fighters became a reality after Grohl's self-produced demo tape resulted in a recording deal. Featuring tracks composed and performed almost entirely by Grohl, those original tapes were remixed and released as the Foo Fighters' first album. The disc's platinum success necessitated the formation of a real band.

Compared to their modestly-recorded debut, Foo Fighters' sophomore album, The Colour and the Shape, was a sonic gargantuan that yielded the hits "Monkey Wrench," "My Hero" and "Everlong." With the addition of Taylor and Shiflet and several platinum recordings to their credit, Foo Fighters might consider naming their next album There Is Nothing Left to Prove.