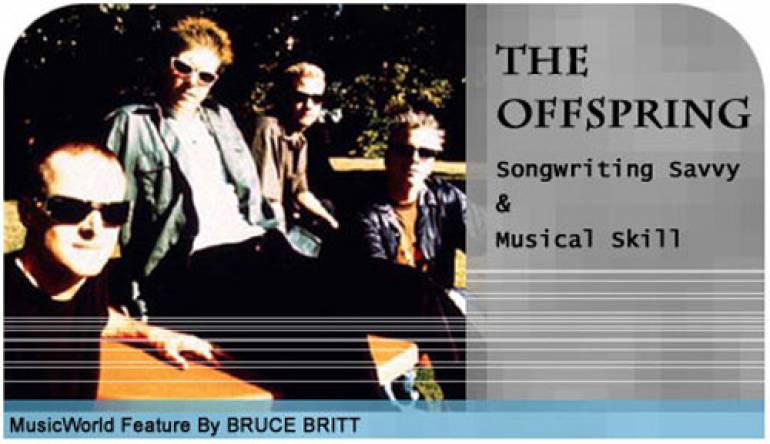 What's in a name? If you're talking about the California punk posse The Offspring, then the answer is "plenty."

Delivering hummable pop melodies with punk fury, the aptly named Offspring sound like the mutant spawn of Guns N' Roses and the Beastie Boys. Their punishing, yet fun-loving sound has resulted in three platinum albums, including their current CD, Americana. The single "Pretty Fly (For a White Guy)" was named 1999's Most Performed Song on College Radio at the recent BMI Pop Awards, where Offspring singer/songwriter Dexter Holland accepted the award.

The single's appeal was understandable. "Pretty Fly (For A White Guy)" combines the more tuneful elements of punk, heavy metal and hip-hop with judiciously sampled sound bites. The song finds the band spoofing trendy suburban kids who mimic the hip-hop lifestyle. By gleefully trashing wannabe rappers, The Offspring expose the dubious motives and pretensions of some kids: "If you don't rate/ just overcompensate/ At least you'll know you can always go on Rikki Lake."

But with the 1994 release of their appropriately titled third album, Smash, Holland and company skyrocketed to stardom. Featuring the hit singles "Come Out and Play," "Self-Esteem" and "Gotta Get Away," the album sold over 11 million copies. It also transformed The Offspring into alternapop superstars.

The band's dizzying ascent could be attributed to songwriting savvy and musical skill. Smash featured 14 songs that captured the cynicism and angst of the latchkey generation. Hits like "Come Out and Play" and "Self Esteem" addressed teen obsessions like cars, cliques and gangs.

The band's keen lyrical observations were offset by a brutal, dual-guitar attack complemented by Holland's expressive vocals. In all, Smash trumpeted the arrival of a refreshingly relevant new band.

But success proved bittersweet. Almost overnight, The Offspring found themselves fielding offers from major labels hoping to lure them away from their indie-rock home, Epitaph Records. The band's 1996 defection to Columbia Records resulted in sell-out accusations from some fans.

The Offspring survived the controversy in style. Their 1997 album Ixnay on the Hombre sold over two million copies, while Americana has also achieved similar sales and critical acclaim. As both albums attest, The Offspring have lost none of their songwriting savvy, performing power or artistic integrity.