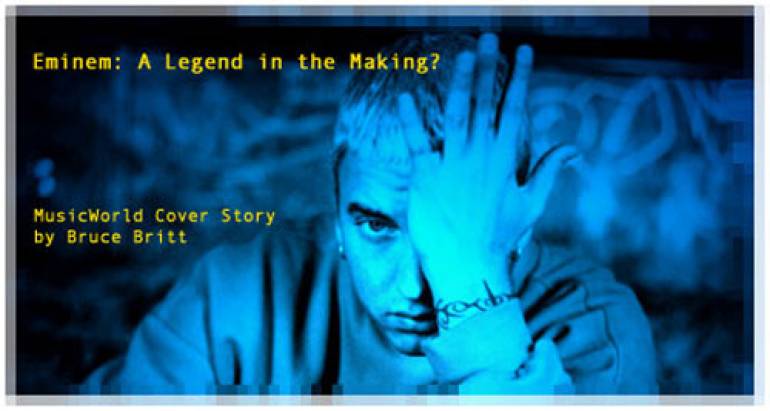 Like Jim Morrison, Madonna and Marilyn Manson before him, Eminem knows that art and bad taste are often two sides of the same coin.

Though the award-winning rapper has drawn favorable comparisons to some of pop's most artful agitators, history may ultimately remember Eminem as the Elvis Presley of Rap. Just as Presley shocked audiences with his hip-thrusting fusion of black and white folk styles, Eminem has jolted radio listeners with his unique combination of prankish suburban pop and sensationalistic hardcore hip-hop. And where "The King" won blues-folk credibility through his association with Memphis producer Sam Phillips, Eminem's career is being guided by hip-hop legend Dr. Dre. The pairing has paid off handsomely: Though his career spans a scant two years, Eminem has already captured a Grammy for his 1999 debut recording, Slim Shady.

Yet, despite similarities to past pop icons, Eminem is very much his own man. Unlike many of his musical peers, the rapper has not curried the favor of mainstream record buyers. In fact, Eminem has alienated everyone from magazine editors and fellow celebrities to his own family. His mother was so offended by his debut album that she's taking him to court. In 1999, Debbie R. Mathers-Briggs filed a lawsuit claiming her son defamed her character in his music and in the press. The suit is still pending.

Having incurred the wrath of so many, some expected Eminem to tone down his provocative rhetoric. Instead, the rapper recently followed up his triple-platinum debut with another controversial disc. Titled after his given name, The Marshall Mathers LP paints a curious psychological portrait. The album's first single, "The Real Slim Shady," finds Eminem gleefully shish-kabobing teen phenoms like *NSYNC and Britney Spears. "Stan" chronicles the maniacal behavior of an obsessed fan, while "Kim" - a track titled after the rapper's wife - details a violent domestic altercation.

Though critics have cautiously condemned the album's black-humored content, many have hailed The Marshall Mathers LP as an artistic achievement. Entertainment Weekly called it "the first great pop record of the 21st Century," while Newsweek described the disc as "absorbing and appalling in equal measure."

Fans insist Eminem's music is the result of a difficult childhood. Their hero spent his childhood shuttling between relative's homes in Missouri and suburban Detroit. According to legend, playground bullies once beat him into a five-day coma. Inspired by the sounds of hip-hop, Eminem developed a rapid-fire rhyming style that belied his boyish looks.

An independently produced demo found its way into the hands of fabled N.W.A. alumnus Dr. Dre, which led to a recording deal. Some pundits speculate that Eminem's guest performance on Dr. Dre's latest album, Chronic 2001, helped prompt the album's multi-platinum success - which raises an interesting question: Is the Elvis of Rap threatening to surpass his Svengali? Stay tuned.