Posted in MusicWorld on February 29, 2000 by Deborah Evans Price 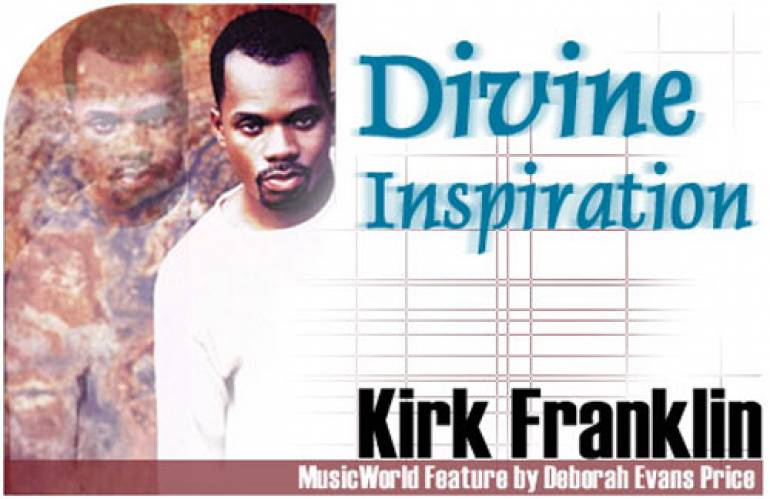 There's an old cliché about songwriting that claims the occupation is 99 percent perspiration and one percent inspiration. Multi-platinum singer/songwriter Kirk Franklin would likely disagree. A gospel artist whose work has transcended genre boundaries to be embraced by a wide variety of music lovers, Franklin credits his success to divine inspiration.

"My interpretation of what it is that I do is going to be totally different than what I think most cats will say that theirs is," says Franklin, "because mine I truly believe is divinely inspired."

Raised by an aunt in Ft. Worth, Franklin began dabbling in performing and writing at a young age. "It was never a thought-out plan that I would become a songwriter; it's just something that evolved," he says. "It's much more intense to just want to keep the integrity and the freshness and newness in the process and not use cliches or words that are too common, but to keep the message I write about Christ and Him loving us fresh. [I want] non-secular ears to stay fresh to it and secular ears fresh to it. We've always tried to create a camp that is a witness to both communities - one that is a strong witness to the church and a strong witness to people that probably wouldn't step in the doors of a church."

Though he's sometimes drawn criticism for being too worldly, Franklin's goal is to create music that bridges the gap between the Saturday night and Sunday morning crowds. On his current album, The Nu Nation Project, the Gospo Centric artist recruited Bono, Mary J. Blige, R. Kelly, and Crystal Lewis to perform on the single "Lean On Me." Franklin and his collaborators performed the tune on the 1999 Grammy Awards telecast and put gospel music center stage on one of the industry's most important nights.

Franklin has won Grammy, Dove, Stellar, NARM and other industry accolades. In addition to permeating the charts, his music has received exposure in film and television. The hit "Revolution" was recently used in the football film Any Given Sunday. "Seeing people really touched and affected by the stuff that God speaks through you," is what Franklin finds most gratifying about his music ministry. He says he always wants to make sure people know God is the source. " always want to make sure people see that's exactly what it is - that it's nothing but a funnel situation," he says.

"Music has such incredible power," says Franklin. "It's really sad to see music limited to writing songs about women and material themes, what you drive and who you shot. It has so much power, and the scary thing is to see how powerful it is when it has a negative message affiliated with it. That microphone can be just as powerful as a gun."