Posted in MusicWorld on December 31, 1999 by Tom Lanham 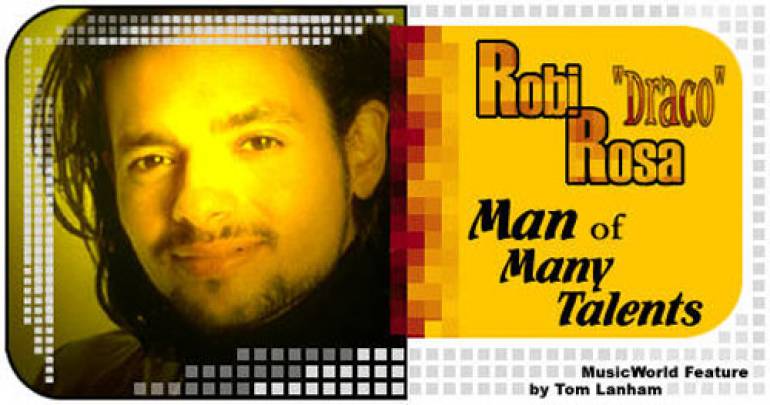 He was almost 17 when the songwriting bug bit him, recalls eclectic artist/producer/painter Robi “Draco” Rosa. And surely, he thought, his managers would not only let him try his hand at composing, but encourage him in this new endeavor as well. Their response stunned him: No, they told their prized protege - his job was singing pre-fab hits in the Latin pop phenomenon Menudo, nothing more. The message was clear. Don’t rock the boat, kid, and you’ll grow up to be a very rich adult.

Rosa had other ideas. And he still goes down in music history, he proudly notes, as “the first member of Menudo to actually resign. I simply left in the middle of the tour and never looked back. And I’ve been walking ever since.”

An understatement, indeed. Rosa has been nominated for three Grammy Awards for his co-writing/production work with his old Menudo chum, Ricky Martin. And in between Menudo and Martin lay miles and miles of world-traveled experience. After Menudo, the Puerto Rico-reared (and still-teenaged) Rosa moved to Brazil, where he began recording Spanish-language solo records. He drifted to Los Angeles, where he landed film roles (Salsa, 1988) and - on his way to a “21 Jump Street” callback audition - eventually bailed on acting altogether. “It reminded me too much of Menudo,” is Rosa’s recollection. “Like, ‘Here’s a script, read it, learn it, put this on, go sit over there and let them do your hair, and then be Captain ‘X’.’ I got totally turned off by it.” The experience however, helped Rosa develop an artistic credo, which guides him to this day: “You don’t pay me enough to sleep with the devil.”

Rosa took up oil painting. His output? Scattered, he sighs. “There are always too many things going on in one piece for some people - it’s complicated, too much information, like a woman on the floor near a bed with the phone off the hook.”

He formed a grungy rock outfit called Maggie’s Dream. And along the way - in Miami, New York, and often in L.A. - he’d bump into Martin, who was putting together his own solo career. Rosa’s own efforts (the Spain-tracked Frio and Vagabundo, recorded in England with Roxy Music guitarist Phil Manzanera at the controls) were dark, moody affairs, sung in Spanish, as busy as his paintings, and swimming in gorgeously Gothic keyboard/guitar tones. Strange, then, that this heavily-tattooed bohemian would soon end up co-authoring Martin’s monster breakthrough smash, “Livin’ La Vida Loca.” It’s true, Rosa allows - it hasn’t been easy keeping his different identities separate. On some production projects, he’s even changed his name on the credits (Delores Del Infante was one memorable alias) to stay in creative character.

How can Rosa jump from his own funereal filigrees to Martin’s tropical-sunny hip-shakers? He pauses to consider his answer. “I was always one of those bashing pop,” he explains. “I always thought that spontaneity in music was where it was at, and I still do to this day. But what’s interesting about getting involved with Ricky is, it’s been exciting because we’ve really tried to make some good, adventurous music - I was so frustrated with Spanish radio, and Ricky has been a big supporter of taking pop to the next level. So I hope that I’m adding something to pop music in some small way, and especially in the Spanish world.”

In fact, chuckles Rosa, the first thought that crossed his mind after being informed of his Grammy nominations wasn’t “What to wear?” but “There’s a museum of Music and Folklore in Puerto Rico, and maybe I have a slim chance of getting in there now!” Whatever the outcome, the ceremony will certainly be one incredibly attention-getting advertisement for Rosa’s upcoming English-language release on Sony. “Hey! That’s right.!” he suddenly gasps. “Man! That didn’t even cross my mind ‘til now!”

Future Rosa plans include: More painting; a one-off club combo dubbed Gringo Star; collaborating with Martin on his sixth release; an all-instrumental version of the spectral Vagabundo; possibly some dabbling in film soundtracks. “The Jack of All Trades,” Rosa cackles, “That’s me.” But look at it this way, he concludes, optimistically: “Life’s too short to be an expert at only one thing!”