Posted in MusicWorld on December 31, 1999 by Jon Matsumoto 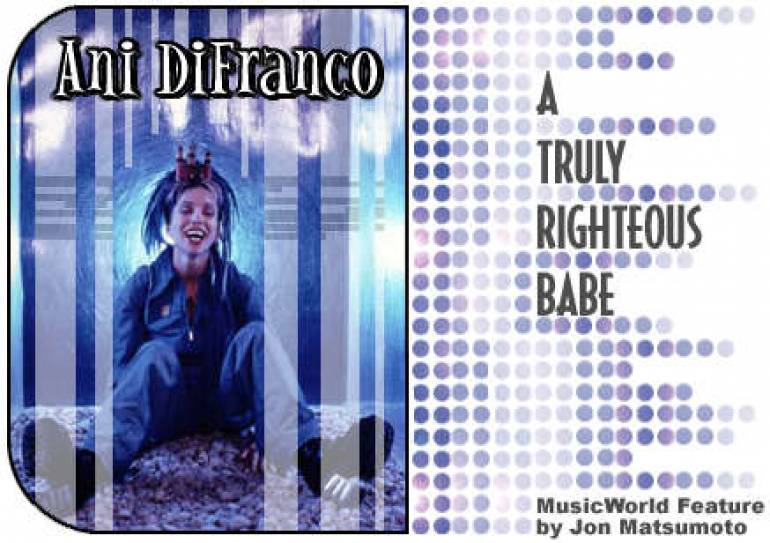 Ani DiFranco answers to all of these diverse adjectives, which is why she is one of the most intriguing figures in pop music. In recent years she’s landed on the covers of Ms. and Spin. Today, most alternative rock hipsters are well aware of her image and music.

What makes DiFranco even more noteworthy is that she’s been able to forge a profitable and highly reputable career without the help of a major record label or even a well-known independent record company. From the beginning, the do-it-yourself Buffalo, N.Y. native has stuck with her idealistic vow to retain total control over her music and career.

DiFranco makes albums to her exact specifications and puts them out at a frequent pace that wouldn’t be allowed at most mainstream pop record companies. Since 1989, she has released 14 of her albums on her own Righteous Babe Records label, a company deeply admired by many of her fans for its grassroots orientation and integrity.

There is little doubt that DiFranco would be a far bigger star if she were affiliated with a corporate record label. After making albums for 10 years, she still receives virtually no commercial radio exposure. This is a principal reason why the gifted 29-year-old artist didn’t garner her first gold record until last year when her 1997 live album, Living On Clip, surpassed the 500,000 sales mark.

But DiFranco - who has also produced albums by Janis Ian, Dan Bern and Utah Phillips - cares little about becoming a mega-star. She would much rather make uncompromising music and champion the cause of the non-commercial artist, which is why Righteous Babe receives countless demos from like-minded musicians. Though Righteous Babe only includes one other artist (Utah Phillips), DiFranco says she is looking to expand the label’s roster of acts.

“I don’t believe in the major-label system,” DiFranco told Guitar Player magazine last June. “I don’t think it’s conducive to art, and I think it hurts more musicians than it helps. Probably one-tenth of one percent of the people who get record deals actually get the big push. On the other hand, if you love to play music, there’s nothing wrong with an open mic night, or a gig at a coffeehouse or corner bar. They’re not very glamorous, but those places are where real music happens. I think MTV is full of commercials and bars are full of music.”

DiFranco has come a long way since she performed her first gig 20 years ago at the age of nine. In the 10 years leading up to the release of her self-titled debut album at the age of 19, she wrote over a 100 songs. By the age of 21, she was touring nationally as a solo acoustic act. She would play gigs anywhere she could find them and sell her albums out of the trunk of her Volkswagen.

Through hard work and talent, DiFranco gradually developed a strong cult following. Armed with potent urban folk songs embracing feminist/progressive values and a compelling physical image (shaven head, tattoos and body piercing), she was a hard-to-forget artist for those who saw her perform on stage.

Inevitably, major record companies began showing interest in DiFranco. But there was no way that she was going to cash in her chips with her burgeoning Righteous Babe label, which currently employs 17 people and occupies several 4th floor offices on Buffalo’s Main Street.

DiFranco claims not to possess any great traditional business acumen. She gives the veteran members of the Righteous Babe staff a great deal of credit for the label’s success, which she defines in musical and human terms rather than in financial terms.

“I’m not a good person in terms of maximizing profits,” she once told a journalist. “But I think we run a really good business in the way we treat people and what our priorities are.”