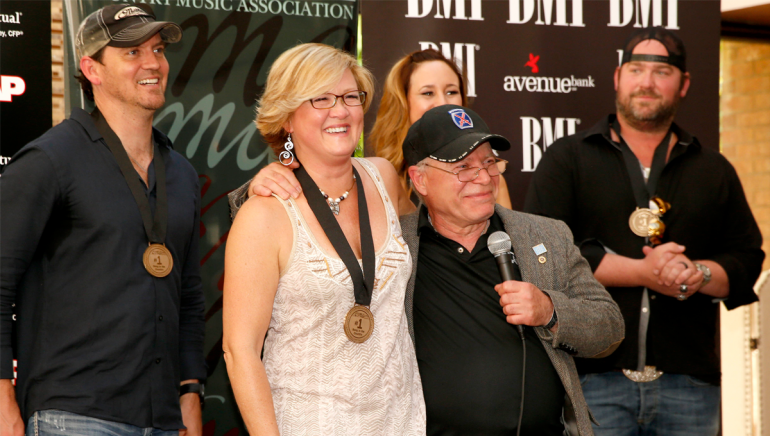 Broadcast Music, Inc. songwriter, Connie Harrington, was listening to a public radio program when she happened to hear a story about a father remembering his son, killed in Afghanistan in 2006. Harrington was so moved by the dad who coped with his grief by driving his son’s truck, that she brought the idea into a co-writing session with Jimmy Yeary and Jessi Alexander. The three penned the poignant “I Drive Your Truck,” which was later cut by Lee Brice. When the song hit # 1, Harrington worked to track down the solder’s father to tell him he was the inspiration behind the work. That soldier’s father is Paul Monti, who recently flew to Nashville to meet the songwriters behind this touching tribute at a # 1 party hosted by BMI.

As the story unfolded, Sergeant First Class Jared Monti was posthumously awarded the Medal of Honor for running out three times into a barrage of bullets and grenades. On his last attempt to save a fellow soldier, he was killed. The song, “I Drive Your Truck,” is a poignant reminder of Jared Monti’s heroism and valor. What better way to honor that than with the power of music?