Posted in MusicWorld on October 31, 1999 by Martin Huxley 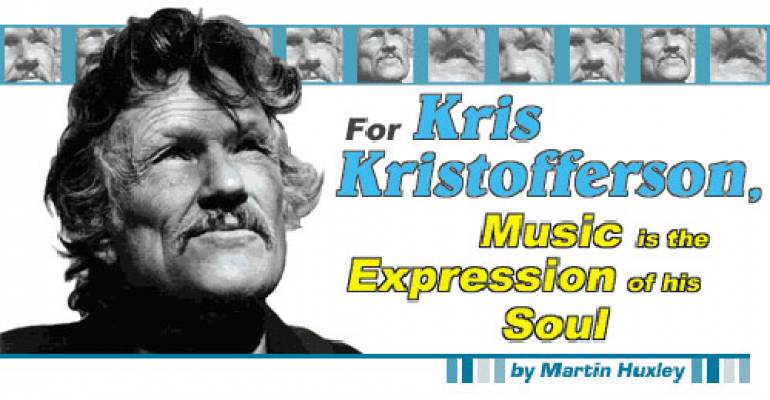 "Country music is the white man's soul music," Kris Kristofferson recently told the New York Post. "It has always been about real life, real emotions, and has talked about things pop music didn't talk about. Songs are the way I organize my experiences and try to make sense out of them."

These days, Kristofferson is best known to the general public as a prolific film actor, with credits ranging from such big-budget Hollywood fare as A Star Is Born and Heaven's Gate to more critical favorites like Lone Star and A Soldier's Daughter Never Cries.

But in the 1960s, long before he ever stepped in front of a movie camera, the Texas-born former Rhodes Scholar, Army helicopter pilot and recording-studio janitor emerged as an incalculably influential songwriter whose lyrics brought a world-weary, reality-based sensibility to country's traditional themes of sin, loneliness and redemption. Kristofferson compositions like "Sunday Morning Coming Down," "For the Good Times," "Help Me Make It Through the Night" and "Me and Bobby McGee" - his own versions as well as covers by Johnny Cash, Ray Price, Sammi Smith, Roger Miller and Janis Joplin - bucked Nashville convention to set in motion country's influential "outlaw" movement.

Kristofferson sees the new album, his first since 1995, as a second chance to do right by his songs, free from the overproduction that marred his '70s albums. "I listen to some of my earlier records and I'm embarrassed now," Kristofferson recently admitted to New York magazine. "I'm sure I was drunk."

Though his acting career continues to keep him busy, the now-sober Kristofferson asserts that songwriting remains his first love. Music, he says, "is the expression of my soul. I'd been away from it for a couple of years before I did this project, and I'd forgotten how much I missed it."