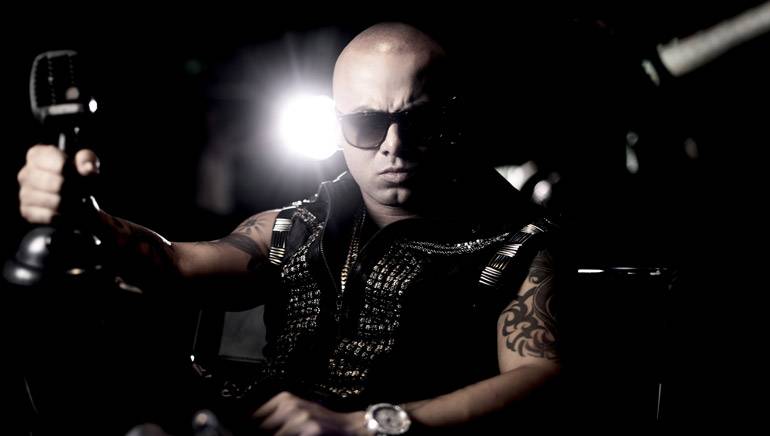 It’s been 15 years since Wisin took the urban Latin scene by storm as one-half of the powerhouse duo Wisin & Yandel, winning two Latin GRAMMYs, a GRAMMY and 19 BMI Latin Awards along the way. And ever since he went solo in 2013, the artist born Juan Luis Morera Luna in Cayey, Puerto Rico, has remained just as consistent in blazing up the charts with danceable hits.

The first taste of this latest installment of Los Vaqueros came in the spring, in the form of the reggaeton-vallenato hybrid “Nota de Amor,” featuring Carlos Vives and Daddy Yankee. The irresistible single, written by Wisin and showing off his more romantic side, reverberated all across Latin America and the U.S. upon its release. Wisin’s next single, a duet with fellow boricua Ricky Martin titled “Que se Sienta el Deseo,” promises to keep audiences dancing through fall. If you recall his other duet with Ricky Martin and Jennifer Lopez, 2014’s “Adrenalina,” it was an explosive dose of feel-good energy.

BMI spoke to the urban Latin idol as he preps for his world tour in support of Los Vaqueros: la Trilogía about the evolution of his music, the power of collaboration, and lessons learned.

1. What’s the concept behind your new album?
This is the third installment in the Los Vaqueros series, which has always been about collaboration. I’m a man who loves collaborating, not just with artists within the urban movement, but across all genres. I think it’s necessary nowadays to come together in order to keep growing. By doing so, I’m able to reach an audience that may not necessarily know my music. Likewise, people who listen to urban music may not necessarily listen to those artists [with whom I’m collaborating], so everyone wins. I think this album will exceed expectations. I did the first two Vaqueros with Yandel and now I’m a solo artist, but I’m not doing it alone. I’m in the company of great artists who believe in my work. As we speak, we are mixing the new single with Ricky Martin, “Que se Sienta el Deseo,” which I think is going to be huge. “Adrenalina” conquered the world and I feel that this new song will have the same effect. It has that same Latin energy, that party vibe.

2. “Nota de Amor” has been such a hit. Did its success surprise you?
I’ve been very consistent, and the reason is because I don’t just go into the studio and selfishly do what I feel like doing in hopes that people will go out and buy my albums; I give the people what they want. I pay attention to what’s playing in the streets. I think people were a bit surprised with “Nota de Amor.” They thought it was a Carlos Vives song, but it was the first single off my new album and a song which I enjoyed writing. These days, the magic is in these types of collaborations. That song in particular represents a very strong sense of unity between Colombia and Puerto Rico and the music of those countries. At the same time, we each keep the essence of our individual sound, so when you hear it, you’re not quite sure if it’s vallenato or urban, but what matters is that it’s a rich, magical sound.

3. At what point in your career did you realize the importance of collaborating with other artists?
It was definitely a gutsy thing to do back in the day, to fuse your music with someone like Ricky Martin [“Frío”], Jennifer Lopez [“Follow the Leader”], or Enrique Iglesias [“No me Digas que No”]. It just wasn’t done in our genre. I’m so grateful that I had the chance to do that early on with Yandel. By the time we did “Algo me Gusta de Tí” with Chris Brown we realized we could break language barriers and work with American artists. We did a song with R. Kelly in 2005 [“Burn It Up”] and I just couldn’t believe it because he was this giant artist. All of those songs opened doors for us and allowed us to get to places we never imagined going. It’s impossible to do a project like Los Vaqueros if there is ego in the way, though. That’s why I’m so grateful for the artists that I work with, like Carlos [Vives] and Ricky [Martin] – the bigger they get, the more humble they become. Those are the people I want by my side, visionaries who want to keep growing and continue to break barriers in music.

4. Tell us about your creative process. How do you write songs?
It’s like when you want to lose weight and you have to hit the gym every day and watch your diet. You have to do it every day, even on those days when the music just isn’t coming out of you. The moment will come when you find what you’re looking for. I try to go to the studio every day and make a habit of studying the work of each producer and writer that I work with and they study my work, too. When collaborating with someone like Ricky Martin, for instance, we think about what he’d be comfortable doing, will he like singing in that range, in that particular tone? With “Nota de Amor” it was the same thing. When we finished it, we knew it would be perfect for Carlos [Vives] and when we sent it to him, he went crazy for it. It’s about finding a comfortable place for those artists so they can do their thing and remain who they are. I always start with the lyrics first, then the melodies. Of course, you can’t control when the inspiration strikes. You could be in the shower and think of a rhyme [laughs]. You can’t control your muse; she just comes and goes as she pleases.

5. What’s your advice for young songwriters wanting to enter the Latin urban market today?
Stay humble, more than anything, because it will allow you to meet people you never thought you’d meet. And stay disciplined. If you want to be in the big leagues, you have to practice your technique every day. You can’t think, ‘I made it.’ On the contrary, you can learn something new about music every single day. And give thanks to God, because that’s the reason we’re able to keep on breathing and doing what we love.

6. What do you think is the biggest challenge your peers in the genre face nowadays?
We can’t box ourselves in. Music is music. We have to keep growing and the only way to do that is to experiment with other genres and sounds. If you think about it, all of the songs that made history this past year have been fusions, like “Bailando” from Enrique Iglesias.

7. Being that you love experimenting, would you ever try your hand at something totally out of left field, like opera, for instance?
I’m always going to do urban music. I wouldn’t dream of changing my genre because the beauty of it is that we can play with instruments from other genres and personalize it while still remaining urban. On my new album you’ll hear things like accordions and Spanish guitars, but they sound fresh and new. That’s why I will never get sick of urban music. If it’s with the right person, I’m willing to do it. Nothing is off limits.

8. What’s one tough lesson you learned early on that stuck with you?
In the early days [of Wisin & Yandel], our lyrics were much more explicit and a lot of times it came across as offensive to women, who found it degrading. But women still made up about 60 or 70 % of the people buying our music, not just physical albums but digital sales. So with songs like “Nota de Amor” you see that I’m making music with that audience in mind, especially with the romantic lyrics and the melody. It’s content that a lady who is 70 years old can enjoy as can a 13-year-old girl. That’s what makes it universal. Rich people, poor people, men, women, children – they can all enjoy my music in their daily lives. But that all came with experience. In the beginning I didn’t write like that.

9. What did you listen to growing up?
I’ve always listened to all types of music, everything from Wu Tang Clan to Guns N’ Roses to Shakira. Maybe that’s why I’m able to play with so many different sounds and have so much fun in the studio, because it’s years of studying all sorts of music. I know good music when I hear it, it doesn’t matter what genre it is.

10. Tell us about your relationship with BMI.
BMI is a beautiful organization. Because of the fact that we have the same vision, we can accomplish great things together. My success isn’t just mine; it’s my record label’s, it’s BMI’s, and everyone who works behind the scenes. They’re just as important as the person holding the microphone. I’m happy that they nurture and support what I do because I do it with love. I’m grateful that they make it possible for artists to keep growing every day. I’m a happy man.