Posted in MusicWorld on January 24, 2014 by Angie Romero 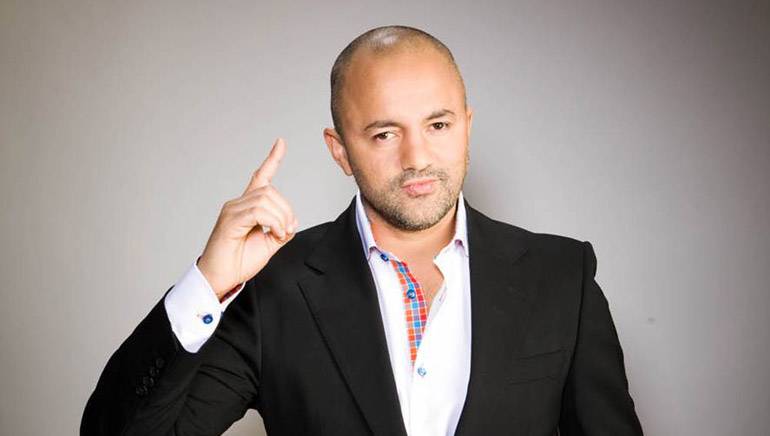 Every once in a while, you get to see where all the magic happens. Broadcast Music, Inc. recently scored an exclusive invite to the offices of 2101 Records, songwriter and producer RedOne’s new label, a joint venture with Capitol Records. On that particular fall day in Los Angeles, we listened in as Jennifer Lopez, one of the marquee acts on RedOne’s roster, finished a recording session for her upcoming album. It was a glimpse into how the Moroccan-born hitmaker and multiple BMI Pop Award winner crafts hit after hit for some of pop music’s biggest names, not to mention exciting up-and-comers like Midnight Red. With an enviable résumé that includes collaborations with Lady Gaga, Jennifer Lopez, Nicki Minaj, Pitbull, and even Michael Jackson, RedOne is just as focused on developing the newer artists on his roster as he is delivering hits to some of the biggest names in pop.

But getting here wasn’t an overnight story; when he first moved to the United States from his native Morocco via Sweden, RedOne struggled to make it. In fact, he had to prove there was a market for a then-unknown artist by the name of Lady Gaga in Europe and Canada before anyone in America would give her single “Just Dance” a chance. There was a time, as he’ll tell you, when he was ready to give up on his dream. In this MusicWorld Online interview, the man born Nadir Khayat talks to BMI about his epic journey to the heart of Hollywood, where, through hard work, courage, perseverance and that Midas touch, he continues to see his dreams come true.

Congratulations on your new label, 2101 Records. Where does the name come from?
2101 Records is so special to me. The name comes from my apartment number in New Jersey [circa 2006]. Back then my wife and I had only an air mattress, so from that to the hits and global recognition, it’s the perfect explanation of what the label is. We want to take on new artists that have big dreams, who come from nothing, and make them into stars.

Paint us a picture: who was Nadir, the teenager in Morocco? Who was this person, what instruments were you playing?
I was a dreamer, for sure, a big dreamer, and that hasn’t changed. I’m the ninth in my family, the youngest, so growing up, I had to listen to all my brothers and sisters’ very different musical tastes. Everyone had something they loved, everything from Bob Dylan and Bruce Springsteen, to Deep Purple, Stevie Wonder, Billy Joel, Foreigner, Lou Graham, Michael Jackson. And then Arabic and African music, too. In Morocco we have so many styles and we listened to all kinds of music from all over the world. It was exactly what’s happening right now in the world — everybody is open to everything. That was me, growing up, playing guitars, wanting to learn everything about everything.

What was your reaction when you first heard one of your songs on the radio?
The first time I was at home, in Stockholm, Sweden. And it was actually me singing in a rock band. I was a guitar player and the lead singer and I had really long hair [laughs]. It was a song called “Vertigo Awake.” I remember it like it was yesterday. As far as my first global hits, I have two - “Whine Up,” which I did for Kat de Luna [in 2007] and then, “Just Dance” [for Lady Gaga, in 2008]. That song was huge. At that time, I started traveling more because everyone wanted to work with me and everywhere I went I heard my song — on the radio, at the club and in restaurants. It was magical.

At the time when you created “Just Dance,” did you know how special it was going to be?
Yes and no. I thought, “This could be huge if the world takes it in, if they give it a fair shot.” Gaga wasn’t big at the time, so with new projects, you never know. But I felt she was special and that song was very special.

Before you hit it big, is it true that you almost gave up?
I was going to move back to Sweden. I always was a big dreamer and I really wanted to make it in the U.S. but the competition was crazy and nobody would give me a chance until 2006, 2007. I was lucky that my wife convinced me not to give up. She convinced me to stay in New Jersey three more months. We borrowed some money from her sister to survive and then that’s when “Whine Up” happened, within those three months.

You’ve worked with the biggest names in pop, even the King of Pop himself, Michael Jackson. Out of all those collaborations, which one is closest to your heart and why?
Every experience is special. I work with Pitbull a lot, he’s like a brother, and Jennifer Lopez, she’s like a sister to me. Music brings people together and suddenly you have new friends. Every new artist that you work with, for the most part, you become friends with, and it’s a relationship that’s going to last forever. All my songs are like my babies and I love them all equally.

Congrats on signing Jennifer Lopez to 2101 Records. Her music experienced a resurgence, thanks in large part to you. What’s it like working with her?
She’s an icon. I was a fan of hers ten years ago or even before. It’s such an honor to work with her and it’s fun because she loves music that moves people. She’s a true entertainer and always wants to reinvent herself.

What’s the definition of a feel-good melody?
To me, a good melody is something that transmits something. It can either make you cry, go crazy or it can make you feel good. I’m a music fan, above everything else, so if the music makes me feel a certain way, I know that it’s strong. And then, of course, it has to be simple enough for the non-musicians to remember it and sing along to.

What is your biggest dream and how close are you to achieving it?
I’ve already accomplished many dreams, but there are two. One is making my label, 2101 Records with Capitol, the biggest label on earth. I see it as a new Motown — that’s my inspiration. And the other thing is to reach a good position where I can devote all my time to helping others who are going through tough times in life. That’s the mission of the 2101 Foundation. We’re already doing some stuff to help people here and there, but the ultimate dream is to dedicate all our time to that and be enough of a name to attract other big names to help in the cause.

What is the best piece of advice someone has ever given you?
To believe in myself. That’s the same advice I would give anybody. If you can believe it and start seeing it, then you’re on a good path. That’s what happened to me. I’m from Tetouan, a tiny city in Africa. I saw what I wanted to do in America and I just did what I had to do, traveling from country to country, meeting new people, working on my craft and working hard to get it. It took me over 15 years but it happened. You just have to believe it and see it.