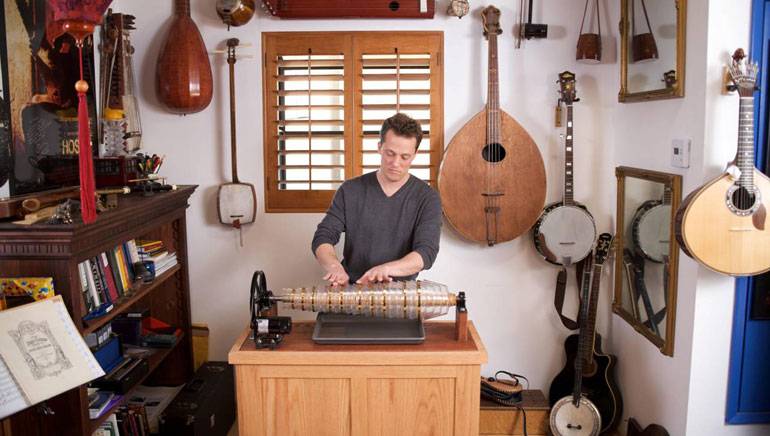 Nate Barr’s music does much more than nudge nerves or cause one’s hair to stand on end. The first composer in Emmy history to be nominated twice in a year’s Main Title category, for The Americans and Hemlock Grove, Barr’s scores don’t just electrify the air of some of television’s most widely-watched franchises, they define it. Most may recognize his sound within the humid, swaggering atmosphere of True Blood, which the BMI-affiliated composer has written for from start to hotly anticipated finish—this summer on HBO. Pausing from work at home in Los Angeles, Barr opened up to BMI recently about the range of tools, musical and otherwise, that allow him to stay sharp and keep busting creative blocks.

You have a remarkable collection of instruments in your home studio. Are there any new toys you’re especially excited about?
I just bought the 1400 pipe Wurlitzer theater organ that was on the Fox scoring stage from 1928 – 1994. Among the many films it has been featured in are The Sound of Music, Patton, Star Trek and Empire Of The Sun. Even Bernard Herrmann used it back in the day! Part of the reason I bought it is because I sense there’s a whole universe of sound to be harvested from it that I have never heard before. It’s just an incredible instrument, and also a remarkable part of film music history.

When it comes to composing, you’ve mentioned that starting out it usually comes down to the cello or guitar. Who do you credit with making those instruments a part of your life?
The cello always felt like work growing up, until I met this wonderful teacher named Maxine Neuman, in New York. She’s the greatest teacher I’ve ever had. She made me look at the cello as an extension of myself. That’s when I started to get motivated around my cello playing.

Before that, guitar was sort of my rebellion. But my parents were always 100% supportive of that too. They loved that I was so passionate about music. I’m grateful now that I was forced to practice cello all those years, because it’s become such a part of my sound and my process.

Even when creating entirely new sonic textures, you’ve expressed a preference for handheld instruments over digital means. How did that develop?
I started out with Hans Zimmer, and that was as much a learning experience as far as what was going to work for me as what wasn’t going to work for me. Hans has a process that’s very specific to him. I didn’t find myself connecting to computers and synthesizers in the same way he did. I always needed the physicality of an instrument to give myself the opportunity to make mistakes that sometimes evolved into cool ideas. For me, that never happens if I am sitting at the same keyboard using the same 88 keys. But with cello, guitars, or more obscure instruments, the possibilities for chance and experimentation open up.

Those discoveries are worth the extra time?
When I started doing this 15 years ago, working this way probably created more work for me, because in addition to writing the part, I had to play it to a point where it was an acceptable performance. Over the years, I’ve become a much better musician on several instruments, so this process is much quicker now. And it does alleviate that extra step of, okay, now I’ve written the parts, let’s go find players and re-record them all. Of course this process only works with a smaller ensemble sound like that on The Americans and True Blood.

But a big part of why I work this way is because it helps me to stay interested in the process. Scoring is so labor intensive and requires so much time in the studio. At the beginning of a project I buy a couple new instruments that are going to be fun to explore – and the less familiar I am with them, the better.

What’s your advice for moving past those blocks where nothing seems to be working?
Often times, for me, a block is about muscle memory. That is why moving beyond the piano as a tool with which to compose often does the trick. As musicians, we all get locked into these physical patterns on various instruments. I have a certain muscle-memory on the piano that’s very hard to break away from. That can be a positive in the sense that it becomes my unique sound. But it can also become a negative when I’m trying to explore a new direction. If I hit the wall on the guitar or piano or cello, I can pick up another instrument and often it breaks me out of whatever pattern it is I’m stuck in.

However, there is no more effective means of getting through a creative block than a deadline! If I have a week to do something, often times the first day or two are productive, and then I have another day or two that are just completely dead, and then as the deadline looms nearer and I get that familiar pit in my stomach, it just hits like a flood and I get it all done.

How often do you leave compositions unfinished and stashed aside for a future project?
In the early stages of exploring the musical sounds for a film or TV show, the process is as much about figuring out what doesn’t work as it is about what does work. I’d say there’s a lot of work that remains incomplete during this exploratory phase, because when I get it to a point where I can tell it’s not the right vibe, I put it down. But if it’s a really cool musical idea that I’d love to explore further down the road, then it goes in the folder for a future project.

That sounds like a skill you’ve had to develop in your career. Is that true or was it always an ability of yours?
I think it is a skill to develop. The biggest mistake I made over and over again when I first started out was committing to a musical idea because it was a cool piece of music, and not necessarily because it was the right piece of music for the show. I learned, eventually, that one of the most important things—especially in such a deadline-driven industry and craft—is being ready to throw things out really quickly if they’re not working. I think that’s one of the biggest pieces of advice I can give to young composers starting out: Don’t be afraid to throw things away the minute you feel they do not work.

How would you say others, the show-runners or producers, impact what “works” for a particular show?
The nice thing about film is that often times you’re speaking to one person, and that’s the director. Producers may chime in here or there, especially on larger studio films where there are a lot of politics involved. In television, this can be the case too. The Americans for example, the show-runner and show creator are the last stop for musical direction; if they think something works, then it goes. It’s really good to know that once someone’s signed off on something, it’s really done, as opposed to the endless tiers of politics and bureaucracy that occur on some projects.

Are there any other challenges of scoring for TV vs. film?
I think the further along you get in the season on a show, the more comfortable people get. Often times, the fifth episode is easier than the third, and the ninth is easier than the fifth. With film, unless it’s a sequel, you get one shot at it, and it’s done. There are challenges to working in both mediums. But I think the nice thing about TV is once you’ve nailed the sound of the show, it’s a matter of enjoying the ride: continuing to create that sound, growing it, and really becoming part of the identity of the show—assuming it’s a show that allows for that.

Why did you choose BMI?
When I first started out, BMI was the organization my agent recommended. Then I was part of the BMI Conducting Workshop. As I did that, and as I started to work on some shows for which I got BMI awards, I’d just become familiar with more and more people at BMI. It really does feel like a family. There’s a loyalty there that’s important to me.