Posted in MusicWorld on April 20, 2015 by Ted Drozdowski 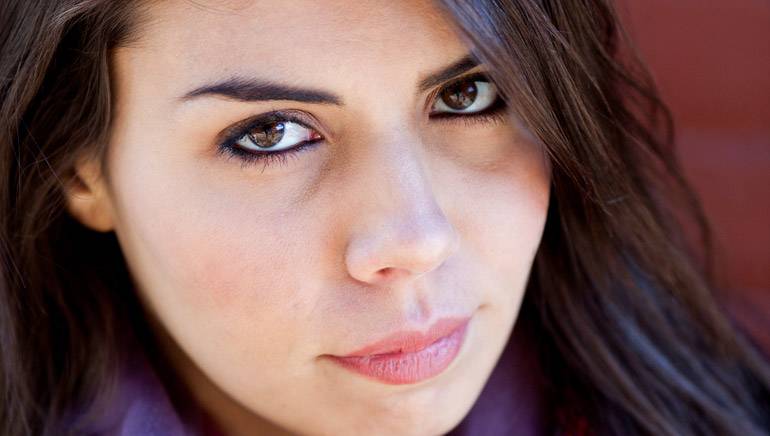 Saxophonist and composer Melissa Aldana is a living bridge between traditional and modern jazz. Her new album Melissa Aldana & Crash Trio offers gorgeous cascades of melody and daring – from the joyful post-bop rush of “M&M” to the closing notes of her solo performance “Ask Me Now,” which boldly reflects the impact sax giant Sonny Rollins has had on her music.

Although Aldana is an adventurous, lush toned player in her own right, the 26-year-old virtuoso from Santiago Chile has a broad embrace of influences – from historic figures like Charlie Parker, Cannonball Adderley and Michael Brecker to modernist giants like her mentor and 2015 BMI Jazz Masters Award winner George Coleman to fellow young jazz firebrands like Kurt Rosenwinkel – that gives her compositional intelligence a concrete foundation. It helps that she comes from a line of estimable saxists. Her father, Marcos, is a leading Chilean saxophonist and teacher, and her grandfather, Enrique, was also a sax playing, internationally touring big band leader.

In honor of Jazz Appreciation Month, BMI continued this conversation with the rising star to ask about her past, present and future. Here’s what she said:

Your father and your grandfather were both jazz saxophonists. Was there pressure on you to keep up their musical lineage?
No, everything about that was great. I was able to grow up with a great teacher. I was six years old when I started studying with my father. The first solo that he made me transcribe was a Charlie Parker solo, so I was really lucky to have somebody that taught me about tradition and the language of jazz right away.

You inherited your grandfather’s tenor saxophone. Is it your primary instrument?
Yes, but I also play a little bit of alto. I used to play alto for many years and then I heard Sonny Rollins when I turned 12 and fell in love with him and with the voice of tenor. When I changed to tenor my father gave me my grandfather’s saxophone. He had a famous big band and on a tour of Europe he bought a Selmer Mark VI. They don’t make them anymore. The quality of the material and everything about it is just great. All the masters used the Selmer Mark VI, so I’m really fortunate to have one.

How does your new album with your Crash Trio reflect you as an artist and a person?
I could have had a lot of great guests, but I’ve been growing with this band – song-wise, concept-wise – so that’s why I decided to record with just the trio. This really is where my mind is. I’m a big fan of the great trio of Sonny Rollins. Also I really love [guitarist] Kurt Rosenwinkel’s trio and [saxist Mark Turner’s] Fly Trio. So I thought this trio would be a good way to try to find the balance between the traditional and the modern. That’s what I like as an artist.

How do you balance your freedom and desire to express yourself with your desire to be heard by a larger audience?
That’s one of the things I was thinking about when I recorded the album. I was trying to be honest and trying to have fun and express ideas that were clear. I thought that recording two ballads would be something that would connect me more with the audience. I also love playing ballads. I’m coming strongly from the tradition of Sonny, John Coltrane, etc. playing ballads. So that was my way to engage the audience in what I was trying to say.

How does a composition begin for you; how do you build it into a fully realized piece?
I always start writing music by melodies, maybe because I’m a saxophone player. I’m a big believer in strong melodies. “New Points” on the album is inspired by the big influence of Kurt Rosenwinkel. I love his melodies, and melodies are especially important for me playing in a trio. Strong melodies make it easier for people to connect with the music. So I find a melody in my mind and I write it down, and then I slowly work on it until it all comes together.

How do you balance composition and improvisation in your music?
I think about improvisation as an extension of the composition. Every time I write a composition it’s all about story. I try to make it have a beginning, then the story develops, gets to a climax and goes somewhere else. I think about the solo, when I improvise, as an extension or an answer to the composition. I’ve always been a big fan of transcribing, which helped me develop my voice and find out who I am. All the great players I love tell musical stories, so that’s what I’m trying to consider when I improvise.

Let’s talk about George Coleman, who was recognized with a BMI Jazz Masters Award this year. What impact did his mentoring have on you?
When I was in Boston, I used to go to Ernie Sola, one of the greatest saxophone repairmen in history. He was really close to George Coleman, and told me that George Coleman is a great teacher and a great guy, and that they were close and that George would do him a favor and hang out with me. Ernie called George and I played a tune for him on the phone and he liked it. So George and I would hang out and we’d sit down at the piano and talk about harmony. George is the master of harmony, although he knows so much about everything. He taught me how to look at harmony when you play a ballad – to really get into that big sound and beautiful notes, and find the real meaning of what you are playing.

Who are the three composers who’ve influenced you most?
Wayne Shorter – there’s something really unique in the way that he plays melodies and I really like his harmony. He tells a complete story. I love Benny Golson, who is a great melody writer with so many great tunes that have his own vibe. He writes modern music that’s still linked to tradition. And Kurt Rosenwinkel, who is my favorite modern composer and a big influence on young jazz saxophonists and guitarists.

What is your favorite live venue?
I love the Village Vanguard [in NYC] – the vibe of the place, and so much history. And Smalls, which is all about music I really love. It’s one of the greatest places in New York for young jazz musicians.

Why did you choose to join BMI?
I thought it would be important for me to register my tunes, first of all, and then I heard a lot of great comments from other Jazz musicians about BMI. It’s been great.