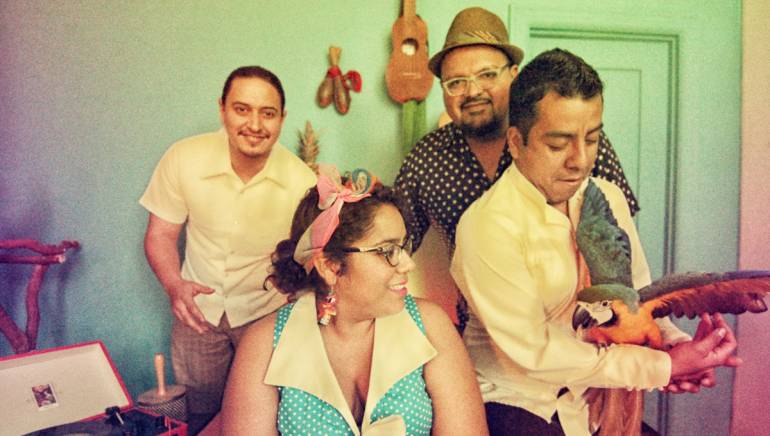 It was a night that the members of La Santa Cecilia would never forget, when they heard their album 30 Días was awarded a GRAMMY for Best Latin Rock, Urban or Alternative Album. Backstage, lead vocalist La Marisoul, accordionist Jose “Pepe” Carlos, bassist Alex Bendana and percussionist Miguel “Oso” Ramirez took time to reflect on their win.

“A few years ago we were just kids running around the city with dreams and ideas,” Marisoul said. “Now we’re here living our dreams.” La Santa Cecilia, Ramirez added, embraces traditional culture with pride and “we also accept and love our traditional North American culture: rock, blues jazz. We just mix it all together and we create a style of music.”

The BMI-affiliated band, based in Los Angeles, took time out between gigs to talk to us about making music, having a bigger spotlight and becoming part of the BMI family.

Why did you decide to join BMI?
Ramirez: There was this moment to get a placement on the Showtime series Weeds and we needed to have a publishing company. We’re really lucky that Marisoul had a relationship with [BMI’s] Marissa Lopez, who became a very important person in our life and our career.

What is it like getting major attention as a band?
Ramirez: We feel lucky that our dreams get to come true … and being able to take our music as far as we can. This is really awesome to work with Universal Latino, producer Sebastian Krys and our BMI family.

What is the writing process like as a group?
Carlos: The music process has been really organic. Everyone comes in with different influences. Miguel is really into Afro-Cuban music. Alex likes salsa and jazz. I like norteño music and boleros and Marisoul loves rancheras and Mercedes Sosa. We let our imaginations fly and that’s helped a lot in developing our style.

Why did you decide to record “Strawberry Fields Forever” on your latest album?
Marisoul: We’re just Beatles fans. We’ve been playing it for a while. We perform the song like a bolero. It took a new meaning. To see people who work in the fields and who work hard gives the song a different kind of meaning.

How do you define your style?
Ramirez:. Our sound has a rawness to it like an old rock band, but rhythmically it’s very tight.

Marisoul: And then we just say you should just come to our show. It’s not always easy to explain or sum it up in one word.

How does winning a GRAMMY impact you?
Carlos: It’s really cool. What musician wouldn’t dream of winning a GRAMMY someday and to have the recognition from the academy. The people who vote are your peers.

What does it mean to have a bigger stage?
Bendana: We’ve worked really hard and our dreams are coming true.

Marisoul: Yes, all the love we’ve received has been amazing. The best thing we can do is make better music.

Ramirez: There are so many people who we want to work with, such as Juan Luis Guerra. We would love to work with Calle 13 or Café Tacvba. We got to work with Elvis Costello [on 30 Dias].

What plans do you have for 2014?
Marisoul: We’ll be performing a lot for the rest of the year. We’ll be doing festivals and many other showcases both here in the U.S. and outside.

What advice would you give to emerging songwriters?
Bendana: Our song “Ice El Hielo” showed us the power of being a songwriter and telling an honest story. When something comes from that place that’s personal, it connects with people.

Marisoul: Don’t give up writing songs. It’s also not about money or gadgets. For me, it’s about people feeling something and connecting with human beings.