Posted in MusicWorld on November 18, 2014 by Katherine Harding 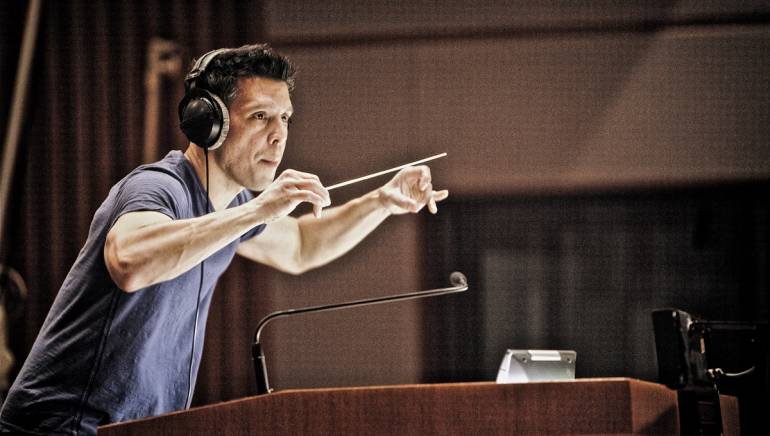 Multitalented BMI composer Juan Carlos Rodriguez knew from a young age that writing music was his calling. His Venezuelan roots gave him a unique perspective on many of the Latin music styles from neighboring countries and was further cemented during his time spent in Miami, a Latin-American hub. This continent-spanning history provided him with the inspiration that led to composing for both Latin and American programs, ranging from Telemundo’s Mas Sabe El Diablo and La Patrona, for which Rodriguez won BMI Awards in 2009 and 2013, to American TV series Matador, which was recently nominated for best original TV score at the 5th Annual Hollywood Music in Media Awards. His immense knowledge of composition has been apparent during his 15-year career composing for Telemundo’s telenovelas, during which time he also worked on a double GRAMMY award-winning album with Bacilos and helped engineer Shakira’s multi-platinum English crossover album, Laundry Service. The successful Hulu series East Los High, scored by Rodriguez, recently wrapped its second season, giving him a moment of free time to talk to BMI about the diversity of his musical style and his advice for aspiring composers.

1. You’ve worked on a variety of TV series. How do you choose your projects?
In this business it is all about relationships and one thing led me to another. When you do something and leave a good impression and deliver even beyond what’s expected, people take you into consideration for another project. That’s exactly what happened. A very good friend of mine I had met at Telemundo called me for East Los High. Then I met with the director and composed some demos and they loved it and hired me. It’s been two seasons.

2. What are you working on next?
I’ve been in talks with the director, executive producer and they have already sent up stuff for the third season [of East Los High]. I’m very happy because that’s exactly how you measure up and know if you’ve done a good job. It’s very important for me to keep relationships and to keep creating. Everything that I am doing really serves the purpose of the show and helps tell the story. In the end, that’s what it really is.

3. You’ve attended many of BMI’s composer workshops. How have they shaped your creative process?
That’s a really nice thing that BMI has going on. I’ve been invited to many workshops, songwriting workshops, conducting workshops, and I have been exposed to many other people, companies and production companies through them. It’s always great when you meet new people, when you go through, for example, a conducting workshop. What’s really awesome is that I got to work with the musicians that work in all the movies that play here in L.A. That really helps to shape my skills as a conductor. It’s been handy because I’ve done a few projects after that workshop and I can really tell the difference in how to communicate with the musicians and how to communicate what your music is about with your hands and gestures.

4. You have a prolific catalog of songs for TV shows, with some running more than 100 episodes. How do you keep the inspiration flowing for these seasons-long projects?
I don’t rely that much on inspiration. When I studied the great composers, in the history of music, they really knew their craft. That’s more important to me than waiting for the muse to hit. When you know how to orchestrate, when you know how to compose music and you have that sensibility as well, or you could have this theory but you might not have this sensibility, you can start building blocks and then you can take two steps back and then listen and say, ‘This is sounding good, now I might add this line or maybe this counterpoint or maybe this texture right here,’ and then that’s how it builds the music. I keep in mind what I am writing for, because music for TV and film is just that, it’s an art form to the service of another art form. It’s about the story at the end. So as long as I am true to the story and the plot, and what’s happening, then I can make it work and it’ll be fine.

5. How do your Venezuelan roots influence your musical style?
Being on top of South America, where Venezuela is, I’ve been in touch with all of Latin America and the Caribbean in Venezuela. I’m very fond of the music from Argentina to Mexico and all of the different South and Central American styles. I lived in Miami for 11 years and that’s the melting pot of the Latin culture; it’s very diverse. Meeting people, musicians, composers, engineers, artists from different backgrounds, I learned so much more about everything. For example, I am working on a series with director Robert Rodriguez, and they were looking for an American-sounding score with certain hints of Latin music. You can only hint at something if you really know the language, otherwise it is going to sound forced, like it was put there, and fail. So that’s exactly what I’ve been doing with the show. It’s an American-sounding show and I use certain measures and instruments and approaches harmonically to give it that flavor. Sometimes it’s subliminal, sometimes it’s in your face, as required, and it’s really helpful, coming from that culture.

6. What do you think about the growth of Latin music in the United States right now?
It’s growing so fast. The Latin community is the biggest minority group and we bring all the music from wherever we come from; I’m very excited because this is a good spot. It’s a good moment for me being who I am and coming from where I come from. I’ve been working in Hispanic TV and now I’m moving to work on more American TV. But at the end, I’m exactly in the middle. This small area is less crowded so only people who are bi-cultural, like me, who understand both cultures, can really coexist and work. I don’t want to belong only to the Hispanic community; I don’t want to belong only to the American community. I want to be in the middle and I can take from left and right as I need. That’s something that I really love about my approach as a musician/composer.

7. To date, what do you feel has been your greatest accomplishment?
Every single project I’ve worked on makes me very proud because every one of them was a step to get to the next one. Obviously, I can tell you I’m very proud of all of the shows I have been doing with Telemundo for the last 14 years. I think I raise my own bar every time with each project and that brought me to more known projects like East Los High and Matador, where I’ve had the privilege to work with very talented people. And very well known people like director Robert Rodriguez. I don’t have a favorite project, actually. I’m loving what I am doing right now and I never know what’s next. I just know that it’s going to be really cool and interesting, and it’s going to be a challenge. I’m ready for another one.

8. You’ve played on a GRAMMY-winning album with Bacilos and engineered one of Shakira’s biggest hit albums in addition to film/TV scoring. How do those experiences shape your work as a composer?
Those are big stars, and I got the privilege to become friends with one of the producers. His name is Luis Fernando Ochoa, and he’s a BMI composer as well. I think he is the most important producer of Shakira, since her first record Pies Descalzos that she did in Colombia. It was her breakthrough record in Spanish. Laundry Service was going to be her crossover record. He invited me to be part of that so I recorded some keyboards and did some recording engineering with him. Then we moved on to record some ideas and arrangements on keyboards on the record Cataluna, for Bacilos, and that record did really well. It won a Latin GRAMMY and an American GRAMMY in the same year. That was really nice to be part of. I was learning from so many people that were involved in the project. I learned a lot of things about the business, production and composition.

9. What advice do you have for aspiring songwriters and composers?
Don’t stop doing it, even if it seems you’re going nowhere.  Aren’t the most rewarding things in life sometimes the most difficult to achieve? You have to keep going. In my life, beginnings were really, really rough for me. I decided to be a composer and even though I hadn’t composed anything, next time somebody asked me, ‘What do you do?’ I said I was a composer. ‘And what have you done?’ ‘I haven’t done much, but do you have anything? Can I help you with something?’ I was just so eager, but that really helped me. And then it was the right time and talking to the right people, and along came an opportunity with Telemundo and I started my almost-15 year career with them. Then at some point, I decided to polish my craft and went to study film & TV composition at the prestigious Berklee College of Music in Boston, and now I am doing some other cool stuff with other people. Don’t stop doing it and be true to yourself; that’s the most important thing. If you want to try to sound like somebody else, then you’re going to lose yourself and you might be losing out on who you really are and what is your unique point that you have to offer. And then there’s a lot of hard work; this is a business. It’s about relationships. If you don’t meet people, you don’t go out, and you just sit composing, I mean, you have to balance your life between your creative side and your social side of your life. And that’s how you do it.

10. Why did you choose BMI?
I chose BMI because it was highly recommended by a couple of friends of mine, who were working on different projects at the time. And then as years went by, I started to bond more and more with the people. Even though I’ve had offers from other PROs, the kind of relationships, the quality of relationships that we have built over the years, it’s really good. BMI has always been there for me when I have needed them as friends, as professionals, whenever I need advice as far as the music business, for connections, for opportunities. It’s countless. It’s been almost 15 years with BMI. That’s where I registered my very first TV work ever, and until today, I keep doing it. I have a great relationship with everybody here at the L.A. office, and I’m looking forward to expanding and meeting some more people from other offices like New York or Nashville.