Posted in MusicWorld on July 28, 2014 by Christina Honeysett 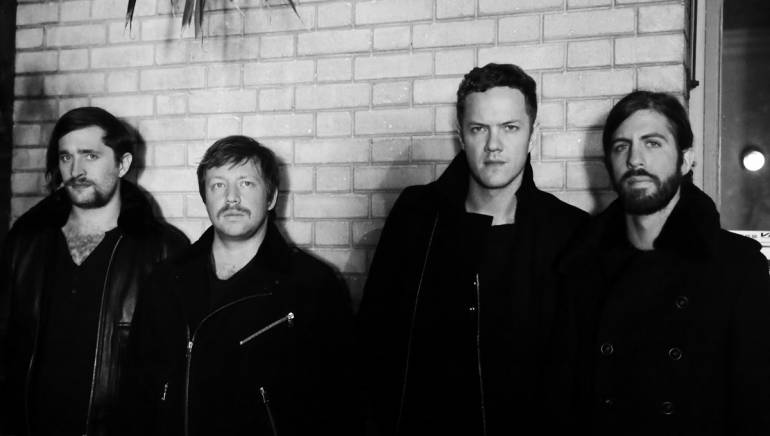 Imagine Dragons is on top of the world. The band recently wrapped the last show of their Into the Night tour and has scored countless awards and recognitions once inconceivable from their humble beginning six years ago in Vegas – a GRAMMY for Best Rock Performance (“Radioactive”), two BMI Pop Awards (“It’s Time” and “Radioactive”), an American Music Award for Favorite Alternative Artist and 14 Billboard Music Award nominations, among others. Their breakthrough single, “It’s Time,” earned the group a groundswell of interest and chart-topper “Radioactive,” off their album Night Visions, solidified their place as the industry’s next big hitmakers, with Rolling Stone proclaiming the song “the biggest rock hit of the year.”

Call it modesty or persistence against the odds, the band – frontman Dan Reynolds, recently honored with the Songwriters Hall of Fame’s prestigious Hal David Starlight Award, guitarist Wayne Sermon, bassist Ben McKee and drummer Daniel Platzman – has managed to stay true to their ethos of authenticity and emotional struggle. Their music thrives on alchemy, extracting from that resistance and creating music that has a redemptive and uplifting message. It is at once very personal and universal. “I wrote ‘It’s Time’ during a very transitional period in my life,” Reynolds has said. “It seemed like everything was going wrong. I was trying to decide what I wanted to do with my life, trying to figure out how seriously to take music. I was making decisions about who I was. I’m a pretty young guy and I’m still trying to figure out the answer to those questions.” This rawness of their music has earned them respect from the songwriting community and led them to be embraced by music fans around the world.

Now as the band leaps into their newest project – writing their upcoming second studio album – BMI was there as they reflected on their recent success, creative process and advice to aspiring songwriters.

You’ve had massive success with Night Visions. What are some of the themes that resonate throughout your songs that speak to so many people around the world?
We don’t really write with specific themes in mind. Our songs are more of journals than anything else - so the only rule is to write from a true place. Sometimes music that is personal has the ironic effect of resonating with people on a more universal level.

Tell us about working with Alex Da Kid on the album.
Alex is a really talented guy. He’s been a great mentor for us and is always challenging us to push ourselves creatively.

You’re currently recording a new album. What can you share with us about that project?
It’s too soon for us to really talk about the new music, but we are really excited about it. We want to give it at least as much room to incubate and develop as the last album, so we are taking our time.

Talk about your creative process.
The songs typically start with a demo written by one or two members of the band. We’ll write literally a hundred songs, and then eventually bring them all together and figure out which ones resonate the most with the group. Those songs come alive when we start working on the tracks together.

Where is your favorite place to write songs/record? Do you write on the road or prefer the structure of your studio?
We write all the time, anywhere we can. For the last two years, that meant writing on the road, in planes, on the bus, in hotels, wherever.

What advice would you give to songwriters just starting out?
Don’t ever stop writing, and don’t take shortcuts with your music. Writing, like any other craft, comes best to those who work the hardest.

Tell us about a day in the life of the band on tour.
Travel, eat, exercise, perform, write, sleep, repeat.

You’ve won many awards in recent years, from Billboard Awards to GRAMMYs. Which was most meaningful and why?
It’s been a little unreal to win awards on shows we’ve watched since we were kids. But honestly, the most fulfilling things these last few years haven’t involved awards shows as much as seeing people react to our music. That’s every musician’s dream.

How has social media played a part in your success?
Social media can get a little complicated these days with people using several different services, but it certainly helps bridge the divide between artist and fan. There are so many ways for us to interact with people personally in an immediate way, and as an artist that’s really valuable. It allows you to be more nimble, and to have a better grasp on fan reactions, concerns, excitement.

How would you say BMI has impacted your career?
BMI supported us from a very early stage in our band’s career. We played our first “big” L.A. show at The Viper Room as a BMI Pick of the Month, and we also played the BMI Showcase at SXSW. These shows and the general support BMI has given us as writers have been really key.