Posted in MusicWorld on August 14, 2015 by Ted Drozdowski 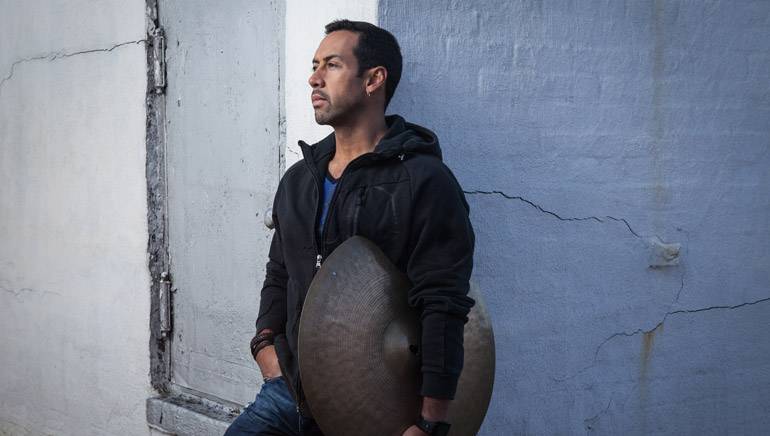 For Sanchez – who’s won four GRAMMYS, been featured on the covers of drum and jazz magazines, and has three previous albums as leader – it’s all part of a journey that began in his native Mexico, where he started playing drums professionally in his early teens. After studying classical piano to enrich his compositional breadth at the National Conservatory in Mexico City, he went to Boston’s Berklee College of Music, where he met vibes giant Burton. When Burton recorded some of his tunes, Sanchez joined BMI and has continued to evolve as an instrumentalist and composer.

BMI spoke with Sanchez on the phone from his New York City home, as he was preparing for a series of festival dates with Migration.

The Meridian Suite explores the concept of meridians and how they are a connective tissue for humanity. How did you arrive at that theme?
Meridians are these imaginary lines that meet and intertwine at different places, uniting people and locations. I realized the themes in the music — the harmonies, rhythms, melodies – were doing the same thing: meeting and intertwining in subtle and sometimes serious ways. As I developed the idea, and it got longer, I decided to see what it would be like to write the musical equivalent of a novel.

How has playing with other exceptional composers affected your composing?
When they give me their fresh material, I can explore it and analyze it, and that takes me deep into the world of composition. I’ve tried to assimilate the things that work for me, and distill them into my own work as a composer, bandleader and musician.

How do you feel The Meridian Suite represents your evolution?
This album allowed me to be myself. There were some things I’d forgotten about my musical personality, like my interest in fusion, which can sometimes be a bad word. “Fusion” means “busy,” “technical,” “not very musical” to a lot of people. But it’s good to embrace all kinds of approaches. I started playing rock, fusion and Latin music, and then came to jazz —which is my love — much later. This album sums me up better than anything I’ve done. I also treated my drums differently from one part of the suite to another. So it liberated me as a composer and a producer.

Your all-drum soundtrack for Birdman is a terrific achievement – so intuitive and yet unpredictable. How did it come about?
When Alejandro [Gonzalez Inarritu, the film’s director] asked me to do the soundtrack, he knew he wanted just drums. Alejandro and I got together in a studio in New York. He went through the script with me and explained each scene in great detail and had me improvise on what he had told me. As a jazz musician, you are always reacting to your surroundings. The difference this time is I was reacting to a plot. The scenes were so long it was hard to remember what happened, so I asked him to sit in front of me and raise his hand every time he imagined the next phase of the scene. They used the demos we recorded to rehearse and shoot the scenes on set. And when they were finished, they cut the music to the film and showed me the results. Then we went back into the studio and did everything again, watching the rough cut. Some of the things we kept, so the combination of the first demos and the second session are what you hear on the film.

How do you typically compose?
I have no real system. One of my rules as a composer is that if I can’t sing it, I’m not going to write it. Modern jazz can be very complex harmonically, melodically and rhythmically all at the same time, so I think you need to throw a rope to the audience, and that can be any one of those elements. I’ve learned a lot from Metheny in that respect. There’s always an accessible element in his compositions.

How do composition and improvisation balance in your music?
With improvisation, you need good compositions for the results to be good, because the tunes inform how you’re going to improvise. And it’s good to know the sound and styles of the musicians you’re writing for. That was my goal in writing tunes like “Nooks and Crannies” for John Scofield and Christian McBride on Three Times Three,— a very funky, swinging tune in five. I would never write a tune like that for my own band, because conceptually I don’t want to take them there, but for Three Times Three writing for the players and their strengths led to really wonderful opportunities for improvisation.

Who are the three composers who have most influenced you?
Chick Corea was one of the first jazz composers I really looked up to. I’m in awe of the sheer amount and variety of music he’s produced. Pat Metheny is another, because of how much I’ve worked with him and how deeply I’ve been able to get into his music. Since I studied classical piano, Chopin and Debussy are composers I’ve always loved. Their tunes are genius. Also Bach. His tunes are perfect works of art.

What advice would you offer to jazz composers and musicians beginning their careers?
Try to play with as many people who are older and more experienced than you before you have to go into band leading. In jazz, you learn by osmosis. If I had to make my first record in my early 20s, it wouldn’t have the backstory, the learning and the experiences that went into creating it.

What’s your favorite live music venue?
SubCulture on Bleeker Street in Greenwich Village – it’s causal, but a listening venue. Jazz should be heard in places that are conducive to listening.

What are the biggest challenges you’ve had to overcome?
The first was leaving Mexico. As a student, it was hard to get a visa. We had to go to the consulate of the United States and they treated us like cattle. It was horrifying, depressing, expensive and humiliating. And as a Mexican it was worse than for other international students. Others would get their visa renewed for four years — the length of the college program. But as a Mexican, I had to renew every six months. By the time I got my green card I had won GRAMMYS and been on a bunch of records and magazine covers, so it wasn’t hard to prove that I could offer something nobody else could.

The second was the perception that because my name is Antonio Sanchez, I wanted to play Latin jazz. I wanted to play jazz with no barriers, no rules… And I think The Meridian Suite is proof of that.