Posted in MusicWorld on March 12, 2012 by Ellen Mallernee Barnes 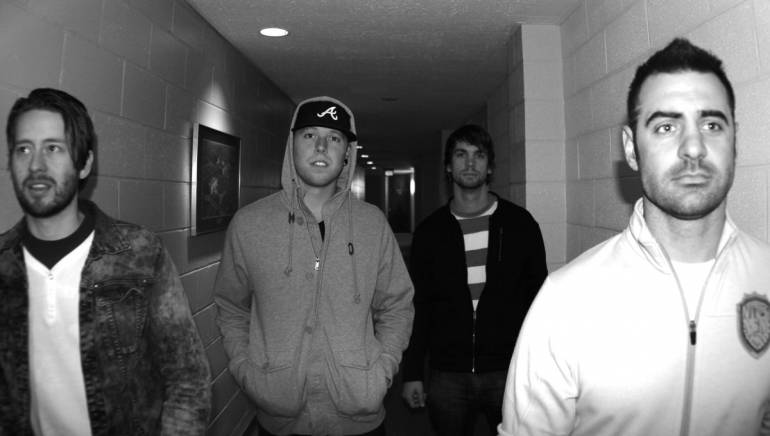 When Vonnegutt guitarist Neil Garrard slipped his band’s raw demo to a classmate who just happened to be the brother of Big Boi (of Outkast fame), everything changed—but not overnight, frontman Kyle Lucas is quick to point out. Now 26, Lucas was 22 when he and Garrard signed their Marietta, Georgia, band to Big Boi’s Purple Ribbon Records. Big Boi was taken with Vonnegutt’s interlacing of hip-hop, rock and pop and took the band on before they’d even played a show. An EP, a mixtape and many frustrations, growing pains and Big Boi pep talks later, Vonnegutt now lays claim to a full band, a tour in the works, and an insanely catchy album very much worth Lucas’s long wait.

1. Let’s talk about your first full-length album, ‘Falling Up the Stairs’…
We just actually turned it in this morning to be mastered. It’s been four years [in the making], and this is such a huge, huge relief. It still hasn’t even sunk in. We’ve been signed with Big Boi for four years, basically just figuring out our sound. We pretty much only started touring last year, though, so we finally got our lineup solidified. It seems like it’s been an extra long time, but the public doesn’t really know about us yet so I’m just super, super excited about turning it in.

2. When were you going for with this album?
I wanted very contemporary production so we have a lot of electronica in it, but also we are a live band and there are four members so there are live drums on every song. I wanted it to be live hip-hop and as catchy as possible; that was my goal—to make every song very, very catchy. Intelligent pop almost. We didn’t hold back, and I didn’t dumb down any lyrics. We wanted to do it kind of how Fall Out Boy did it. They made very intelligent pop—they’re so in-depth with their lyrics, but it’s so catchy.

3. Who are three artists that have influenced you the most?
MC Joe Budden is one of my favorite rappers. He definitely influenced me and made me realize that you can be emotional in songs and be very real. He’s one of my favorites. And also Claudio Sanchez from the band Coheed and Cambria is one of my favorite lyricists, and the third would have to be Vic [Fuentes] and everyone in the band Pierce the Veil. They’ve been super influential to me. I just really enjoy their music.

4. Tell me about your upbringing and how music became such a force in your life.
I grew up in Marietta, which is 30 minutes north of Atlanta. Ever since third grade I wanted to be a rapper so I just kept rapping and not knowing what I was doing. When I was 15 I turned my bedroom into a home studio and taught myself all these programs on computer and just really dove in. I was naïve because I never expected to be able to be somewhat successful and somewhat respected. It was just me in my bedroom, and I just kept at it. I went to Kennesaw State for college, and I started the band with Neil [Garrard], and Neil went to school with Big Boi’s little brother. After we did the “Vice Nine” EP, we just kind of passed it to him. It didn’t just happen right then. Even after we got Big Boi it was a long road, which is why we named the album ‘Falling Up the Stairs.’ We got signed before we did a show, but that doesn’t mean that we were automatically handed the keys to the kingdom. So it seems, from the outside looking in, that we’re at the top of the stairs, but we really felt this whole way that it’s been such a tedious process. This industry has been a wakeup call so I’m super relived and feel like a weight is off my shoulders with this album. I can’t wait to start touring off of it, shoot a video for every song, and just really build it from the ground up.

5. What advice would you give to singers and songwriters just starting out?
I would say, “Never quit.” It’s super frustrating—I know firsthand, but also keep it as in-house as possible. As much as you can do yourself, do it. That saying that “if you want something done right, you have to do it yourself” is so true. Especially if it’s your music and your vision, have a hand in the videos or do as much as you can by yourself. That way you have more control of what’s out there. If I can do it, anybody can do it. It just takes years of frustrating stuff happening and staying determined and not losing focus.

6. Is there a topic you haven’t covered in a song but want to?
I haven’t really told a story with a song as in-depth as I think I could about particular people—even if it’s fiction or if I draw from real-life experiences from people I know. I want to explore that in the future.

7. What’s your favorite live music venue?
The Tabernacle in Atlanta. It’s an old church, painted all cool inside, and it’s the biggest, most intimate venue. It’s the biggest you can get while still feeling like it’s not an arena. We did a couple of shows where we came out and did a song with Big Boi so we never officially played there as a band, but I would love, love, love to play there. That would be my dream for Vonnegutt.

8. What are your feelings about modern hip-hop?
I think it’s in a good place. There’s always going to be super, super commercial stuff, and then there’s always going to be the underground, but I feel that because of the power of the blogs, YouTube is the main reason people find music nowadays. People have an advantage now by shooting their own videos and doing videos for free. It’s kind of cool seeing super, super cool lyrical people like J. Cole and Kendrick Lamar that maybe 10 years ago wouldn’t have been doing the live venues they are or have the buzz they do. Now you don’t even need radio play. Kendrick Lamar’s doing huge venues with thousands of people, touring across the country; that’s crazy.

9. You’re playing the BMI SXSW Thursday night showcase this year. What are you most looking forward to in Austin?
Two years ago we formally submitted an application to play at SXSW, and we got rejected. That’s right when we hooked up with our manager, and he ended up getting us two shows even though we weren’t officially allowed to play SXSW. So the BMI showcase is our first official SXSW showcase ever. I’m just excited to be included and to be there. Especially with our album just getting turned in today, I feel like everything is falling into place.

10. Why did you choose BMI?
We chose BMI because David Claassen from Atlanta is a good friend of ours. I can go up there and talk to David or get a drink with David and handle things person to person. I have yet to ever speak to someone at [the other performing right society]. It was incredibly hard to get a hold of anyone there. So I love that David officially scouted us out three years ago and became our friend. BMI is just super hands-on. It’s a novel concept to actually have human interaction. I’m super stoked to be registering this album under BMI.