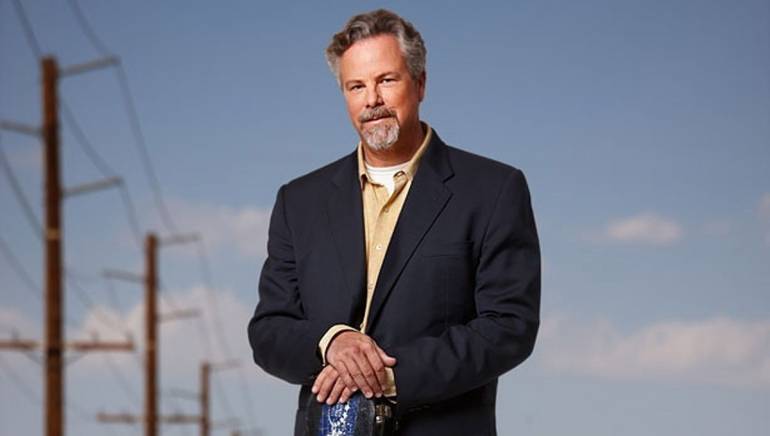 Since 1984, Robert Earl Keen has charted his knack for charming, wry narratives across borders and more than 15 albums. Yet that road, for lack of a better term, arguably extends beyond his near-30-year career. In some ways Keen owes everything to the road. It’s served him well, as a metaphor and as a literal path to the fans heard on any of his resounding concert albums. It’s also the subject of his most iconic song, and where he happened to be when BMI caught up with the Texas bard during a pit stop on his current bus tour.

1. When did you choose BMI, and why?
I’d gotten up about 2 o’clock in the afternoon one sunny day in Austin, Texas, and put on a Willie Nelson LP. I would’ve been about 27, and I was thinking, ‘You know, I need to get more serious about this. I wonder what this BMI thing is.’ So I put the LP on, listened to it, thought, ‘Maybe I’ll write them a letter’; wrote a letter and they sent me an explanation of what it was and what it costs [Joining BMI is free – always has been]. I have been with them ever since!

2. Who set the example for you to do it yourself as a songwriter?
We had a real close-knit little family, and a ranch we would visit every weekend. All the way there and all the way back we always sang in the car. Somewhere along the line I realized a way to entertain my family, and I would make up these little songs and they got a kick out of them. The first person I realized wrote songs and did something that was really of great interest to me in the songwriting world was Marty Robbins. He wrote Gunfighter Ballads and Trail Songs, and there were a couple songs that weren’t his, but he wrote most of them. And I thought, ‘I’ve written my own little songs here. I think I can do that.’ As I went along I picked up more people.

3. Like who? Do you have your top 5 songwriters?
That would be Willie Nelson, Marty Robbins, Loudon Wainright—he must write a song every day or something—Richard Thompson, and I’d have to say Lucinda Williams too. There are a jillion other peripheral influences. I listen to Jimmy Buffet. I’m a fan of Norman Blake. One reason I mentioned Willie Nelson back at the beginning of this discussion was because he was another one where I went, ‘Wow he sings but he writes ‘em too.’ I think that’s sort of what steered me to do what I do.

4. You once said ‘Every man should have a shed,’ when describing a songwriting hideout in your hometown of Kerrville, TX. Do you coop up to write, or work with your band?
By and large, I write by myself. I do what I want. I’ve done a fair amount of co-writing and I think I’m an okay co-writer—I mean you’d have to ask the other person! In ‘The Fountainhead,’ the Ayn Rand book, Howard Roark is the main character and his main thing is that nothing great, creatively, is done by committees. In some ways I adhere to that philosophy. I think some of my better songs have been co-written, but at the same time I like the purity of the single artist writing their own songs and singing them.

5. How do you write?
I do have formulas that I like, but I try everything that I possibly can. Which would include just picking a word out of the air and trying to write a song around it, standing in the middle of a pasture stark naked and strumming a guitar—I believe that it takes all kinds of stimuli to come up with a song, and I’m not out there to write the same song over and over. But my greatest, tried and true method is seriously just sitting in one place for long enough to get a really good idea and a melody going and staying with it until I can finish it, or at least get it to the point where I know that the whole idea is complete, and all I have to do is stretch out some words. And I do a lot of editing.

6. You didn’t pick up the guitar until your college years. So what’s your advice to young and maybe not-so-young songwriters?
You’re never too old. Max D. Barnes was a truck driver or something, and he started when he was 50. If it’s in you and you’re good at it and you like it and you’re passionate about it, you can make it. That’s just the Colonel Sanders rule. I’m not the biggest Beatles fan in the world, but I just bought a book about two weeks ago with ten Beatles songs so I can just get a feel for what they did, because I realized I didn’t know a Beatles song. My advice would be: Listen to as many songwriters as you possibly can and don’t rule people out just because you don’t care for their act. Listen and learn, and keep working. You’ll find your own voice. It’s truly about putting in the effort and the time. We’re not all just pieces of clay; there’s something underneath, a form that’s already there.

7. Given your touring schedule, do you advise aspiring writers to earn their stripes playing live?
I’m addicted to being out on the road. I’ve performed some places I wouldn’t have if I’d had my druthers, but to keep a band together and make a tour worth a damn you can’t come out and do two days and then spend five days hanging out. I’m all about touring. That being said, I’m not sure about the value for an artist to get on stage. I’m talking to the people who don’t feel comfortable on stage and they feel like they need to do it, or they have managers telling them that they need to do it. I don’t think that’s necessarily the case these days. If you are born-to-be-on-the-stage kind of person then you should be out on the stage, and that’s the kind of person I am.

8. What are your favorite spots to play?
We played at The Majestic in downtown San Antonio for the first time in about twelve years. I remembered how glorious a place it was, how wonderful it was to play, and they have all kinds of acts coming through there. We also played Bass Hall, in Fort Worth. It’s state of the art, and the people always say, ‘We’ll see you next year,’ as soon as we get off stage. Those are two real favorites. And I like to play The Fillmore, for two reasons: I love all the posters, and I love San Francisco.

9. Is there a song you’ve never been able to finish—a subject or story you haven’t tackled?
My ability to express my emotional side is not as a keen as a lot of people who I really appreciate. I would like to write a great love song…’I love you until the sky turns black,’ or something—that’s not a very good title, is it? Anyway, I would like to have included in my little discography that I wrote something that was extremely touching. I think I’m too shy. My love songs sometimes don’t sound as original as my other stuff.

10. Which artist do you look up to in that regard?
My friend, and I’ve written with him, Dean Dillon, is the best at it. I think he’ll go down in history as one of the greatest songwriters of the 20th century, or of his time. Love and emotion comes out of that dude just like tears and sweat. It’s unbelievable. He’s not embarrassed about it, and to be sitting there writing that kind of song with him—I really admire that.