Posted in MusicWorld on August 1, 2012 by Lisa Zhito 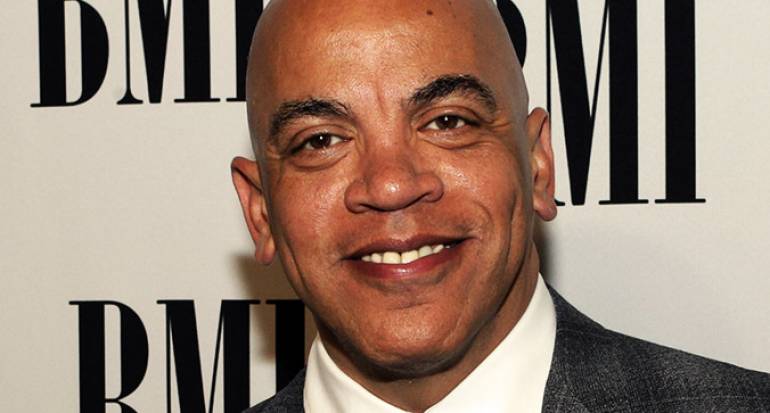 The music world’s quintessential Renaissance man, Rickey Minor has more hyphenates after his name than an Olympic heptathlete. Musician, composer, producer, music director, band leader, mentor and author: These are just a few of the many hats Minor wears in an extraordinarily varied music career. Minor the musician got his big break at age 19, playing bass with Gladys Knight & The Pips. But his career really took off when he paired up with Whitney Houston, first as a member of her band and then, from 1989 to 1999, as her music director. Looking to get off the road, in 1999 Minor switched gears again, becoming a composer, musical producer for television events such as the Super Bowl and Grammy Awards, and musical director for American Idol. In 2010 Minor stepped back into the spotlight again as the band leader for The Tonight Show with Jay Leno. He still finds time for other projects, like last year’s Global Soul concert featuring Stevie Wonder and a host of special guests.

Asked how one person manages to bite off so much Minor laughs, “I don’t sleep! I honestly don’t. I haven’t slept since I started playing music. My brain never shuts down.”

1. How are you making your stamp on The Tonight Show with Jay Leno?

Our job is to entertain mainly the live audience. For me it’s about keeping that energy up in the audience, so when we go to commercial and come back from commercial, and they’re in a frenzy, that energy permeates throughout the rest of the show. Doing that is challenging.

On the other hand, we perform with a lot of the [guest] artists. At least once a week we’re the band backing up the main act on the main stage, so it’s nice to work with Garth Brooks, Sting, Jewel, Lyle Lovett, Keri Hilson, Soulja Boy – everything from classical, country, pop, and R&B. We get to back up a lot of the artists that come in.

One thing we started early on which I love and which I’d like to start again is have artists sitting in with the band. I remember The Tonight Show with Doc Severinsen having different jazz musicians sitting in with the big band. It’s difficult now – the show’s format has so much content shoved into one hour – so it’s hard to feature someone from the band. It’d become more of a music show than a talk show.

2. Why did you take the job? What appealed to you about it?

I got offered this job through my agent at William Morris and when I first heard about it I thought well, it feels like maybe it’s a gig that you retire with, like something you go, Okay I want to get out of the business and this is a nice transition out. Then I started thinking about it and all those years working with Whitney Houston, always being in the background. And this really gave me an opportunity to be out in front, regardless of who’s on the show. So it’s face time on TV. And the hours are so great, it’s about four hours a day, though generally I go in a lot earlier just because I like to get things organized.

3. You’re famous for your prodigious work ethic. Where does that come from?

I just always loved learning about music. I took private lessons and I studied and I practiced. I went to UCLA for math and computer science and when I left in my junior year to pursue music, I made a commitment to excellence. I said, if I’m going to do it, then I’m going to be the best I can, and I’m going to work hard. And within six months I landed my first big gig with Gladys Knight & the Pips, at 19 years old.

I had one of the old jazz guys challenge me when he saw I got the Gladys gig. He said, “Congratulations on the gig, are you practicing? How much?” I said, “Oh, I’m practicing about an hour a day.” He said, “You need to practice six hours a day. You have a job that allows you to not have a regular job. Do you know how many other musicians work 9 to 5, come home and have to take care of the family and then try to practice? You have your job that allows you to provide for yourself, so now is the time to really, really put in the time.”

4. That sounds like good advice. You’ve mentored so many young artists over the years, what advice do you give those just starting out?

I tell them, there’s no substitution for hard work. There are no shortcuts, it’s not going to happen for you without the hard work.

When I speak at colleges and high schools, I tell the students that I’m really excited for all of you, excited that you have found something you’re passionate about; that is something everyone would love to find. And you may even be reasonably talented. I’m not here to judge your talent. But I will say this: Because there are so many variables, 99% of you won’t make it in this business to where you’ll be able to provide for yourself. That doesn’t mean you should give up. But just know that the odds are stacked against you.

If you go to school to become a doctor and you pass all of the courses and you do your residency and you do all of the things that are required of you, then you most likely will become a doctor. But music is one of the professions where you can have all of the education, all the passion and all the desire, but it just may not happen for you.

5. Who were your influences?

Herbie Hancock was a big mentor and supporter of mine. I remember meeting him when I was like 18 years old and his words of encouragement. But I think the biggest one of all would be Whitney Houston. She really pushed and encouraged me. She supported me when I clearly didn’t have a clue what I was doing.

One thing she said to me is that, everyone has to start somewhere. We met when she was 18 and I was 22. We would talk about our heroes – Gladys Knight was my first act, but when she started out she wasn’t Gladys Knight, she was a young girl with a dream. People like Michael Jordan, and politicians or actors, they all started somewhere. It’s okay to start and it’s okay to dream and to not have a clue.

6. If you had to pick another career, what would it be?

I would be an architect. I love shapes and I love studying blueprints. I love looking at how space can be reconfigured in so many ways.

7. Are you into technology?

I use e-mail but I would rather talk. I know sometimes it’s hard, if there’s a time difference, but man I really miss that human interaction. I think that the music we hear now is suffering because of that, because people are making music in their garage or their house and they’re sending tracks over the Internet to this or that person – it’s been so long since I’ve done a session where other musicians were actually there in the room.

8. Do you feel like today’s music really suffers as a result of that?

Oh it absolutely does. You’re not having a conversation! I’m playing the bass line that I want to play, the drummer is playing the drums that he wants to play, the guitar player comes in and does his part based on what was already played, but music is made when a group of people get together and either have an idea or sheet music in front of them and they make music! I think that’s what the magic is on television, it’s me and the guys playing together.

The Hollywood Bowl. I played my first concert there headlining last summer, Rickey Minor’s Global Soul Revue. It was amazing. Of course I played there with Whitney and other artists over the years. The sound is incredible, and you think about all of the artists who have played there, it’s a legendary venue. Acoustically it’s just beautiful, and to play outdoors? For me, that’s it.

It was really about the people I met at BMI and knowing that wherever you go, you get what you give and you get the respect that you give. In this case I felt that when I walked in as a young composer that they paid attention to me. I felt that I had value.