Posted in MusicWorld on April 16, 2013 by Kathy Iandoli 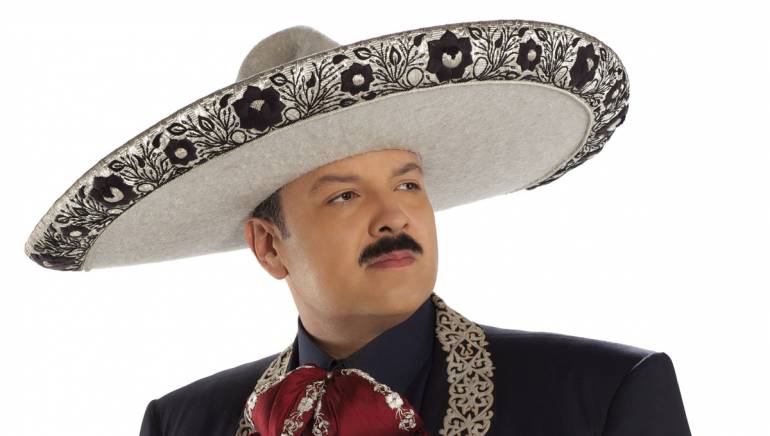 Pepe Aguilar has had a fascinating musical trajectory. Starting as a producer, Aguilar took inspiration from his celebrity parents, recording legends Antonio Aguilar and Flor Silvestre and fused that with his own music. He then made the switch to songwriter, penning for his peers before wanting to add his words to his own music. Both transitions worked, and Aguilar has already made history, being the first artist of Mexican descent to sing in LA’s Hollywood Bowl along with being the first Latino to perform at the Kodak Theater (also in Los Angeles). Last year, Aguilar received his star on the Hollywood Walk of Fame. Being a Renaissance Man isn’t easy, but Aguilar makes it work and represents his Mexican roots to the fullest extent. Here, he takes a moment to discuss his journey with BMI MusicWorld Online, offers sage advice to songwriters starting out, and reveals the exotic location that would be his dream residence if he were to retire tomorrow.

1) What was it like growing up with two creative parents?

Well, it was a privilege as an artist to have such big guides in front of me. Just seeing them perform and seeing them do their thing, so honestly and so naturally without all this glitter that sometimes artists have around them. Not just glitter but all this BS. They were just professional artists and they were just doing their thing because they loved it and I grew up seeing that. I know that I would have been an artist regardless of what my father did or what my mother did. I’ve known since I was a little boy. I’ve always been around all kinds of music and being with my parents definitely helped my goals and my dreams to become reality, and in a very solid form. Because they were not playing around and I was not playing around since I was a little boy. So it was very, very, very cool on the artistic side and on the human side, I was even more blessed because they were very loving parents and very understanding. And they were artists! So yeah, I was very lucky to have them as parents!

Well production, it gets you pretty much involved with many projects and I feel complete. I feel that I do my part and I feel a part of the band, a part of the concept, a part of the album that’s coming out because there’s a lot of the producer in every work. But yeah, songwriting definitely takes you to another level. It gives you a different responsibility within your craft. And it’s something that I haven’t explored yet as much as I would like to and as much as I’m going to. As a mariachi singer, the “tradition” is that mariachi singers don’t necessarily write what they sing because of the nature of the genre. For one reason or another, I started doing just that, and finding myself surrounded by amazing songwriters. People that do that for a living, that trusted my voice, gave me literally hundreds of songs; I just started recording them and put my songs on the back seat. Lately, I started including more and more songs of mine. I’m planning to do an album with just songs of mine, because there is a difference with your crowd. It is a difference when you sing something that is completely yours. You feel more secure and more complete. You feel that you’re giving more. The last songs that I happened to co-write were my last four singles, and it feels good! It feels good to top the charts with a song that you created. It’s pretty cool.

3) Do you still feel yourself in the songs you write for other artists?

Yeah, of course! Definitely. It’s always you. You feel that connection.

4) For young songwriters starting out, what advice would you give them?

Well, to be truthful, one thing that happened with me is that I was afraid of speaking what I think, what I see, what I feel. And, you know, you get involved in the business and sometimes you lose track of what’s really important, which is expressing yourself and not thinking about a lot of the business part of it. It’s been quite an adventure for me to discover myself as a songwriter, and I know that I’m not recognized for that still, but I also know that’s a big part of what I am and of what I do. So, a little tip that I can give young songwriters out there is just to be truthful, to be authentic, and to feel what they do, because after that, everything will be a consequence. To all the new songwriters out there, just keep it real, man. Just be honest and try and do your best with what you have, and the rest will be a consequence. Don’t start writing a song because you want it to sound like this or that or you want to have commercial success. You better have a very clear mind that this is a business of truth and that’s what we have to take it back to.

5) Do you get into a certain thought process when you’re about to write a song, whether for yourself or another artist? Do you have any rituals? Things that inspire you?

I wouldn’t say a ritual, but yes. I have to be calm; I have to be in the mood for this type of connection in the brain. You know, I have four kids and my wife that I love very much and we live all together, and it’s kind of hard to really get out of that groove or get out of that pattern. Going to the office and working concerts and preparing another tour … it’s very hard to work in that environment. Inspiration hits any time, and I always have my iPhone full of notes. You know, little melodies that come and jump into my head or verses or ideas. I’m always writing ideas. I have tons and tons and tons of digital data of ideas I’ve written. But in order for me to really get something from A to Z, I have to sit down, I have to have nothing in my mind, concentrate on what I’m doing and start playing. Literally, playing! Grab the guitar, just play around, play with the idea of what I want to say because I have to have something in mind to say. I don’t just sit here and ask for the songwriting gods to give me inspiration. No, in my case, I have to have a goal already set for what I’m going to do, and then start working on that! Playing the guitar, playing the piano, I’m playing around with my computer and then I take it from there. That’s the way I work.

6) Who are some songwriters that influenced you?

Well, this will sound weird, but people like Roger Waters. Artistic expression doesn’t have a nationality, and there are a lot of good interpreters of feelings that are out there through the ages and through different eras that are really, really an inspiration for me in many genres and many languages.

7) What are your top three albums of all time?

Oh man, that’s always a tough one. You know, because music is evolving constantly and it would be unfair for my feelings and my heart just to pick three albums, but for the interview I can tell you. Maybe back in the ‘70s I would have chosen something from Pink Floyd, maybe The Wall. And from a mariachi album, I would say Javier Solis maybe. Or any one of mine [laughs], even if it sounds a little egotistical. I don’t know, probably I would pick a flamenco album. Maybe something from Camaron or Paco de Lucia.

8) What is your favorite live music venue to experience music?

That’s a tough one. I’ve been doing this for a long time so I’ve played many, many, many venues. You know, Guadalajara has a very nice one. It’s called the Telmex Auditorium. It’s pretty big, but it still lets you interact in a very comfortable way. And you know, the venues are very important but the most important thing for me is the crowd. We can be in a parking lot or at Madison Square Garden or at the most advanced arena, and if the crowd is cool, if the crowd is happy, magic happens. But I have been very fortunate to play, like I said, many, many, many of the big arenas and the most prestigious theaters in concert.

BMI has fit my needs, inevitably, because I’m representing other artists as well as myself and I definitely like the work that BMI does. I think that there is no better ally to take my music everywhere in the world.

10) If you weren’t here doing this, where do you think you would be?

If I wasn’t making music, I would be a very sad person [laughs]. I don’t know. Probably something related to music. Maybe an engineer, maybe a concert promoter, maybe a radio station DJ or owner. I don’t know; music and show business and music business is my life. I really feel it with a passion. I don’t see myself doing anything else. Probably retiring. You know, sometimes I get tired of the hard work and everything that goes around what I am and what I created in this persona. But, I don’t see myself doing anything else. Maybe slowing it down, maybe going to Fiji to live the rest of my life just playing music and putting my music out there digitally.