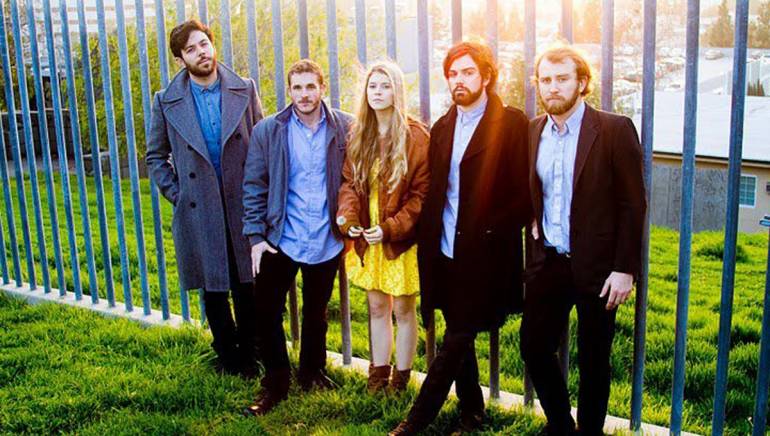 The Milo Greene arriving to Austin, TX next week for the marathon SXSW festival is not a single person—he isn’t even real. What began as a phantom booking agent—an e-mail account concocted by band co-founders Robbie Arnett and Andrew Heringer when the friends still led separate projects—has since transformed to one of Los Angeles’ most buzzed-about indie crews. Now, bolstered by choristers Graham Fink and Marlana Sheetz, plus drummer Curtis Marrero, Milo Greene are packing their silvery harmonies for a week in Austin.

1. What are you most looking forward to about SXSW?
Marlana: Just walking down the street and seeing awesome bands playing. I love to be surprised. I don’t know what to expect, other than it’s going to be the most chaotic, crazy thing I’ve ever seen. I’m honestly a little bit nervous about it, just with the people, the crowds—those things give me a little bit of anxiety. But I think it will be fun. I just like to sleep [laughs].

Robbie: It sounds like a college summer camp weekend, where everybody’s just running around on the streets, running into old friends. I’m excited to see some bands, and we’ve got a pretty full schedule. I’ve never been out there.

2. Had the songs that became “The Hello Sessions” EP, available on your site, been developing a long time?
Robbie: There was no official planning—or release. We went up to Shaver Lake, in the Sierra Nevada Mountains; Andrew’s grandfather owns a property up there. We turned the living room into a little bit of a studio-demo playground, wrote a bunch of songs up there. As we were leaving Andrew asked how he should send them to me over email and I just said, “Call them ‘Hello’ so I know how to differentiate.” I didn’t even realize—on our Bandcamp it was called “The Hello Sessions.” People would ask, “How can we get the EP” and we were confused at first: “What do you mean EP?” It just came out that way.

3. So many groups write about LA or the culture, from vantages either positive or negative. Which is more the case for you?
Robbie: We usually kind of seclude ourselves and then within that environment write. We escape to like Shaver Lake or places up in the mountains. There hasn’t been a lot of writing in LA proper.

Marlana: A lot of the songs that we’ve written have been indirectly written about a friend of ours: his kind of silly life, with relationships and everything. We all kind of think he’s funny and thought it would be fun to write songs about him, without him realizing it. It seems to be working, so maybe if we just keep thinking about him, songs will keep coming!

4. Which artists have or continue to influence you the most?
Marlana: I didn’t really have any person where it was, “I want to be them.” I listened to everything, across the board—my mom loved Motown; my dad loved classic rock. I always make sure my iPod has Patsy Cline on it; Fleetwood Mac’s always on there. I was really into the Foster the People record last year; all the typical indie stuff you could imagine.

Robbie: We’re definitely influenced differently. A top five record of mine, and songwriter for that matter, would be Paul McCartney’s ‘Ram.’ I’ve been in a jazz phase, listening to a lot of Coltrane and Miles, the main jazz guys; I love Charles Mingus; anything with a good amount of soul to it—James Brown’s ‘The Payback.’ I try to stay up with new music. I check out blogs.

5. Are you pushing those influences onto the rest of the band?
Robbie: I try to rub it off on the other guys, not instrumentally. But songs like “Blue In Green,” “Mood Indigo”—I try to reference the energy, the vibes. Structurally it’s going to be different because we’re a pop-song-writing band. But there are definitely elements of those jazz guys that help guide everybody into the same headspace.

6. Is it contentious having so many writers in the group?
Robbie: A lot of it is different from the other bands we’ve been a part of. Either of us will come in with a song and then usually we’ll flesh it out structurally, and arrange it. “The Autumn Tree”—with that I sent lyrics to Andrew and he wrote the melody with the chorus; then Marlana and I got together with Graham and wrote the harmony. So there’s not a particular formula, it’s just based on somebody coming in with something, instead of just jamming.

Marlana: As far as songwriting goes, I’ve been doing it for a long time. I was definitely one of those girls writing love songs in third grade about the boy who didn’t like me in class. When I started writing, I started playing guitar—and I’m not very good at it but I know enough to be able to write songs and make it look like I know what I’m doing [laughs].

7. Why did you decide on BMI?
Marlana: Overall, it felt like a fit. The people that I met seemed to, most importantly, love the music of the band, and express a great interest in it. They’d come to so many shows. The BMI Live thing, also—that a portion of that goes to live shows.

Robbie: I met Casey [Robison, BMI Director Writer/Publisher Relations, LA] a while ago when I first moved to LA with another band. He was just really supportive: brought me to the offices, explained what they did and they’re about.

8. What are your favorite movies?
Marlana: You’ve opened up a can of worms! I would really have to think about that. I did see ‘The Artist’ this year—that was really great.

Robbie: When I was very little we would go to the movies every weekend, to this family thing. Growing up I watched a lot of Paul Newman movies, like ‘Cool Hand Luke.’ It wasn’t necessarily the soundtracks, but the tone of the movie was inspiring.

9. What’s your favorite venue for catching or playing a show?
Robbie: In LA my favorite is the Henry Fonda, and I think it’s closing. We play a lot on the East Side, in Silver Lake. We just got finished with a residency over at The Satellite. That’s a cool venue.

Marlana: The Henry Fonda is a beautiful place to go and see music—the Troubadour, too. I’m kind of disappointed with the venues in LA; they don’t’ have the really legitimate, all-ages venue. Everything is 21+. It’s a bummer, especially for bands trying to get people out. The kids are the ones with so much energy and so much willingness to come out.

10. What’s your advice to some of those kids, maybe just starting out as a writer?
Marlana: Find out what songs you like, and find out why you like them. Dissect them. What are the beats per minute? What’s the snare doing? What’s the structure? How many times do you hear the chorus? And do that with as many songs as you can, all your favorites. That outline can help so much when writing songs.

Catch up with Milo Greene at www.milogreene.com.