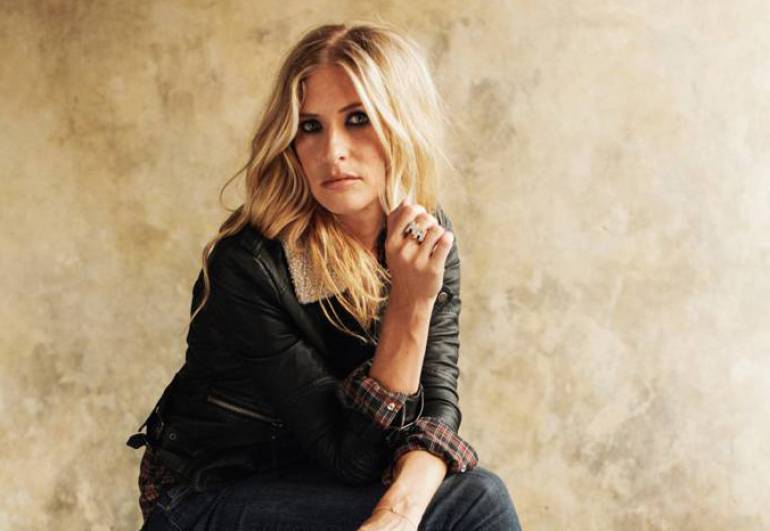 One might expect Holly Williams to have been raised on tour buses and limousines, hobnobbing with country legends and rock stars. After all, as the daughter of Hank Williams Jr. and granddaughter of Hank Sr., she’s certifiable country music royalty. But Williams says no.

“I grew up very normal,” she says. “I didn’t go to an awards show until I was 26. I went to fewer than 15 concerts my entire youth. When my dad was with us, it didn’t have anything to do with music. We’d be fishing, or on the farm hanging out on 4-wheelers. He’d always say, I’m not Bocephus, I’m Daddy. He kept us completely sheltered from that.”

But music runs strong in the family DNA; Williams was writing songs before the age of 10, and by 18 knew music was her calling. She released her first critically-acclaimed album, The Ones We Never Knew, in 2004; a second, Here With Me, followed in 2009. Both were celebrated for their eloquent songcraft, organic musicality, and Williams’ haunting vocals. Critics have likewise embraced her newest release, The Highway, a sweet triumph since the project is a true labor of love: Williams self-financed and co-produced the album, releasing it on her independent label, Georgiana Records. Being in the driver’s seat is nothing new for Williams, however. Already a successful entrepreneur, Williams owns the designer clothing store H. Audrey in Nashville.

1. With your pedigree, was there always an expectation that you’d get into music?

Definitely not, it was the complete opposite. I was expected to go to college. I told my dad, “I can’t go. I want to write.” I worked different jobs – I worked the makeup counter at a clothing store – and lived at home with my mom until I could get out on my own. I played every club that would have me, every crappy afternoon gig with six people in the audience! I really worked my way in, the same as anyone. Finally he came around and said, “Okay, I trust that you’re doing it because you love it. You have a talent with lyrics and I believe in you and will be supportive.” He just didn’t want to see me do something for years and years and have it fail. I had to go, “Dad, this is my passion. And honestly, if I’m street busking, I don’t care, this is what I love.”

2. Did the family name hurt or help you in any way when you were starting out?

I don’t really think either. I got a deal when I was 23 and I started when I was 18, so I spent a good five years [breaking in]. I think had I put on a cowboy hat and was looking for other peoples’ songs and just wanted to be a country singer, then maybe. But my goal was long-term, to be a singer-songwriter playing theaters when I’m 60, the same way Bonnie Raitt and Jackson Browne are. So people knew that I wasn’t just looking for the big hit at the beginning of my career, it was all about getting my songs and stories out there. I was very clear in the beginning: I want to sing my own songs, I don’t want to sing other peoples’, I want to do it my way. Had I been willing to stretch a little bit and do a whole album of hit makers’ songs, then I probably could have got a deal day one. But I was trying to make it my own way.

This sounds kind of strange but I write most of my songs in really mundane moments: driving the car at night to another gig, vacuuming, folding laundry, washing dishes. Honestly! “Drinkin’” and “Happy” came when I was in the kitchen, “Waiting On June” I was vacuuming, “The Highway” I was at a gas station. I’ve never been the kind of writer where I can go into my writing room at 10 a.m. and things just start coming at me. So many people do that and they do it great, but it’s never been my process.

4. Is your writing driven more by lyrics or melodies?

For me, the lyric and melody come out together. Usually it just comes out at once and they’re usually pretty quick processes. Whenever I try to labor over a song for a week, a month, a year, it’s not one of my best songs. My grandfather used to say, “If a song can’t be written in 15 minutes it ain’t worth writing.” And no, that doesn’t necessarily apply to every writer, but it does for the Williams family – even my dad said that. They just come out, and then he may not get one for a couple of months.

5. In 2006 you were in a serious car accident and there was a chance you might not be able to play guitar again. How did you deal with that?

It was pretty traumatic in the beginning. Out of that is where my clothing store idea was born, which opened in 2007. It wasn’t my focus straying from music, it was, I don’t know if I’m going to be able to play guitar, and I want to have a Plan B. So I opened a clothing store, and after about a year my wrist and arm was healed up completely and I started playing again. It was a scary moment. I was on the phone talking to my mom one second and literally 10 minutes later I was in the Life Flight on the way to the hospital. The most important thing that came out of that accident was realizing, life can change any second. It really got me on the course of knowing, this can be taken away from me at any moment. I’d better write as much as I can and tour as much as I can and play and get the music that I want out there.

6. Why was it important for you to be so hands-on with The Highway, serving as co-producer and executive producer, in addition to writing the songs and performing them?

I’ve always been the co-producer on every album I’ve done. It’s always been important for me. I think for some people if they’re not writing the songs, they go in and sing it and then they’re fine not to be there for the rest. But when I’m writing the song, I have a vision of what I want it to sound like. I want to keep it raw and organic-sounding, with instruments that are needed in certain points to build on the emotion of the lyric. So it’s always been important for me to be there for every second of recording.

It gets very exhausting. There are a lot of sleepless nights, waking up at 2 a.m. wondering if you should hire the other upright guy or keep electric bass on this song, should we have a cello there… it’s very stressful. But it’s important to me as a writer to build the song the way I hear it from day one. So it’s a blessing and a curse. Some days I wish I didn’t give a crap and could just leave the studio and go, “y’all have fun, call me when it’s ready!” But I can’t.

7. Is there anything else on your creative wish list?

When I’m on the road, at least an hour a day is spent planning what restaurants we’re going to go to. I’m a serious foodie! I’ve got my dinner reservations set, my breakfast reservations – I love finding local, organic, seasonal restaurants, chefs that focus on real food, kind of a la Alice Waters or Julia Child. So eventually when I calm down I want to do a television show where I’m playing theaters in each town, but I have a day off in between where I can do a 24-hour guide. Maybe we go to the local cheese or dairy farm, or maybe it’s a designer like Billy Reid in Alabama who’s making clothing. Maybe it’s a great restaurant, say I’m going to Husk in Charleston. So eventually I’d love to do a travel show, that’s the goal.

You know, I chose BMI when I was 19, probably. That was one of the things where I knew my family had been with them from day one – obviously Frances Preston helping out with my grandfather’s stuff back in the day, and my dad – so that was one of those musical decisions where I was strictly going, “well, my grandfather and dad were with them, I think I should go with them.” So I went and met with Del Bryant and Frances, and fell in love with everyone that worked there.

9. Do you have a favorite live venue?

As cliche as it sounds, I don’t think you can pass up the Ryman Auditorium in Nashville. You just can’t get past the great acoustic sounds, and there’s almost like a spiritual energy going on in the place. Just the vibe and the way that you feel when you play there, it makes you feel like you’re on top of the world. Not only is it a good place to play, but some of the greatest shows I’ve ever seen, from Coldplay to Gillian Welch to Robert Plant, have been there.

10. What advice do you have to newcomers?

My advice is just to try to find your own voice and what it is you want to say. Not what you think is big on the radio, not what you think is going to sell more albums, but what is your story, and what it is you want to get across to people. I think that so many people spend so long chasing what the trend is and what the hit is. You know, if you keep doing your own thing, eventually it’s going to come into focus. I think as a performer all an audience wants to see is passion and heart coming from the singer, so my advice is to just stay true to who you are.