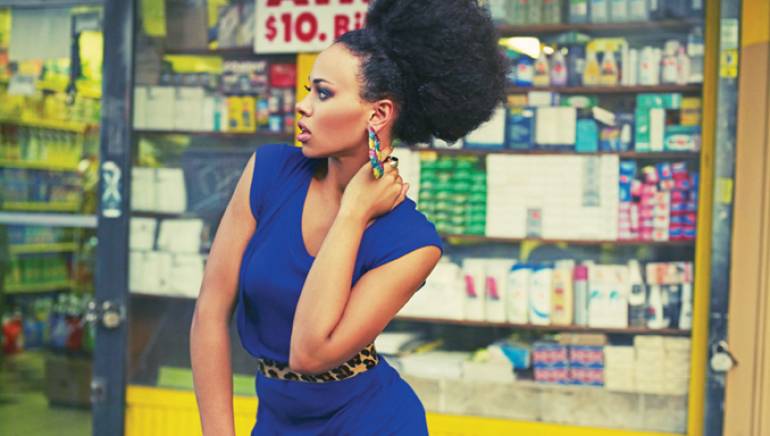 When it’s rolling, Elle Varner’s voice screams classic, muscular R&B. But in most of the singles from the 23-year-old’s upcoming summer release, Perfectly Imperfect, she’s howling those bluesy twists and turns over an unusual mix—like the violins tickling against 808-snares in “Refill,” Varner’s woozy toast to romance. Fresh from wrapping her brightly hued debut, the daughter of a songwriter-producer couple looks back at the sounds she’s shaped—and those that shape her.

1. Your Conversational Lush mixtape, from last spring, is such an eclectic-sounding affair. Is the variety of styles more a reflection of your musical taste, or the range of listeners you want to grab?

2. So that splintered sensibility is new? Or does it extend further back?

Growing up, I listened to so many different things people might not expect of an urban teenager. I was listening to rap and hip-hop but I was also listening to Alanis Morissette and Ani DiFranco, even jazz from the ’40s. I’ve always looked at myself as wanting to be a great lyricist above all else. The music around it is kind of secondary.

3. Which albums or songwriters were most important for you around that time?

My mom had this Burt Bacharach CD sampler. It was every song that Burt Bacharach had ever written or produced. It had versions of songs that are very hard to find, like songs from Dionne Warwick, and “Don’t Go Breaking My Heart” by Aretha Franklin. I just studied that. I didn’t really know—I just loved the music. That was a big one. Sérgio Mendes, discovering bossa nova. My parents would bring home these Motown cassette tapes that were samplers, sort of like modern day mixtapes, but of Motown. My dad [Jimmy Varner] was a producer there.

For me it’s just a natural thing. I’m not like Questlove, who knows every song ever created [laughs]. It’s not even a hobby; a lot of it is just music that I found by happenstance. I used to go pick album covers that I thought looked cool and buy them, when there was a Tower Records and Virgin.

4. Where do you think being familiar with so many stripes of music impacts your songwriting?

I’ve always believed the phrase “there’s nothing new under the sun”—with the exception of the Beatles and Stevie Wonder [laughs]. It’s almost like the world is just a bunch of puzzle pieces that you can put together and always make something make sense, somehow. A melody that I write might be reminiscent of something I heard in a jazz song, or maybe a flow that I write is something I was listening to in a rap song—subconsciously that’s the rhythm I chose. It all comes back in your own writing, what you listen to.

5. You’ve described your ability on various instruments as “basic”—how does that affect or reflect your goal as a writer?

I have a very natural songwriting process, like a kid that doesn’t realize he’s painted something really cool; they were just playing with paint. That’s how I go about writing. I’ve accepted that I’m not going to be Jimi Hendrix, Joni Mitchell or Alicia Keys, as far as instrumentalists. But I think that my songwriting abilities are able to be pulled out of my basic level of knowledge. And I have my whole life to continue learning and taking lessons as I find time.

6. What is the overarching theme to this album, the intent behind it?

The title, Perfectly Imperfect, does really cover all the bases as far as who I am as a person and what I represent. I represent, obviously, young women, but also the idea that we should all love and accept each other as ourselves. I’ve accepted where my music is flawed. There are parts on the album where the note was flat or there was a mistake, but it was so amazing—the emotion was there—so we kept it. That’s my message and my mission: perfectly imperfect.

7. Given that, and especially songs like “So Fly” or “32 Flavors,” do you actively write from the vantage of a role model?

Yeah, in the sense that I always aim to be a role model because I just have always taken that position in life. I’m the first of my cousins. I have a younger brother; I’ve always been looked up to. But at the same time I have a song on the album called “Oh What A Night,” which is about getting drunk in Miami and not knowing where my car is; there are songs that are about the birds and the bees, and I’m not saying it literally, in a crass way. I’m saying it in a cool way, a liberating way. I try to have a balance. I’m not goody two-shoes and perfect by any means, but I consider myself somebody a kid could look up to.

8. What advice would you offer kids, or aspiring musicians looking to get involved in songwriting?

I think a mentor – someone you can look up to or someone who can help you through – is one of the most important things. Because a lot of the time it comes down to who you know, networking-wise, and who can give you the advice to say something like, “Don’t show up at this event by yourself.” There are certain things that if you have someone guiding you, you’ll steer away from a lot of mistakes I think a lot of young songwriters make. Be professional, that’s it. And my Dad’s motto: A, B, C—always be cutting. Just always record, record! You never know. You might get the melody out of it later, and it might be a hit.

My mom was on BMI [laughs], and I was ready to start thinking of songwriting as a job. She registered me.

Pretty much any House of Blues, those have been pretty consistent for me around the country. My favorite is the one in Atlantic City; it’s where I had one of my best shows. I’ll never forget that one, ever. The sound was just incredible—it was amazing.