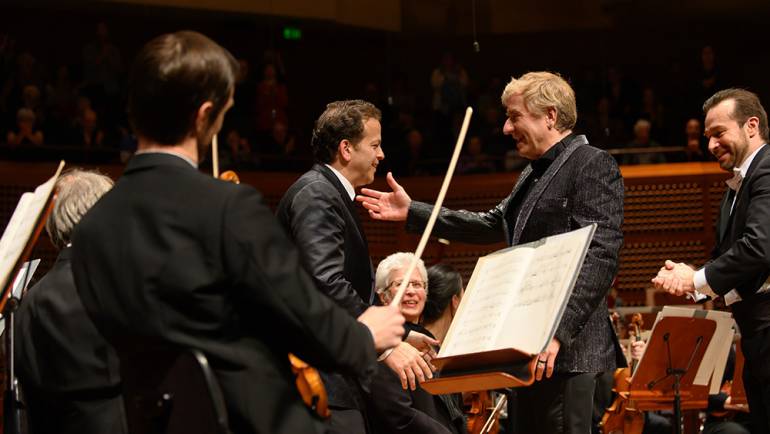 As a classically trained pianist, conductor and composer, Aaron Zigman brings to his work a degree of versatility that’s rarely seen. His deep classical roots, combined with his background in writing and producing songs for many of music’s greatest performers, has given him the ability to traverse all genres of music. The result is the creation of some of the industry’s most memorable and diverse film scores including The Notebook, which consistently ranks in the top ten of romantic classics, Bridge to Terabithia, John Q., Step Up I & II, The Proposal, The Ugly Truth, Alpha Dog, My Sister’s Keeper, Sex & the City I & II, Escape from Planet Earth, and The Other Woman. A musical creator of niche films as well, Zigman’s resume also includes Flash of Genius, The Company Men, I Saw The Light, and the faith-based 2017 film The Shack.

Now, Zigman has revisited his earlier calling to classical music with his work Tango Manos, which made its world premiere in October with the China Philharmonic at the Beijing Music Festival, and its U.S. premiere last weekend with the San Francisco Symphony. BMI’s Doreen Ringer-Ross was at that mesmerizing concert and asked the composer to tell his story to us. Here’s what we asked and what he said.

You’ve scored dozens of diverse films such as The Notebook, Alpha Dog, The Proposal, Sex & the City, Bridge to Terabithia, the animated film Escape from Planet Earth and the Bryan Cranston-led Wakefield. What do you look for when you select your projects?

I’m comfortable working in any genre, so it’s more about the collaboration with directors and producers and achieving their vision. Sometimes that vision is shared from the script stage, and other times I’m brought in during post.

You’ve scored films that have grossed billions of dollars at the box office, but you’ve also worked on acclaimed independent films like Alpha Dog and your upcoming film Gossamer Folds directed by Lisa Donato. What are the pressures that each bring and how does your process vary?

For me, I give everything to every film whether it’s an indie or studio film. With Gossamer Folds, what attracted me was that it is an authentic, compelling drama which confronts prejudice against the LGBTQ community.

You’ve also been active in the recording industry, working with artists like Aretha Franklin, Seal, John Legend, Gladys Knight, and Christina Aguilera.You also have a very impressive classical background. What made you transition back in that direction with your Tango Manos Concerto? Was it difficult switching gears like that? What went through your mind during the process?

I started writing concert music in my teens, focusing on classical music and jazz. I was a studio pianist which is how I got my break in the industry at nineteen years old. I had to know how to play virtually every style of music, so writing Tango Manos renewed my love for this art form. As a musician and orchestrator, it required a tremendous amount of focus because I was writing for one of the world’s premiere pianists, Jean-Yves Thibaudet.

Tell us a bit about creating a tango.

There was a degree of difficulty involved because I chose not to use the bandeon, which is a traditional staple of the tango. This meant that I had to raise the bar on Thibaudet’s cadenzas. I was spending anywhere from six to fourteen hours a day crafting the piece.

Tango Manos was composed specifically for pianist Jean-Yves Thibaudet. Tell us about that. What elements did you have to keep in mind when you were writing for him?

Knowing Thibaudet’s background, it felt very natural to have a very French Impressionistic quality in my second movement while still maintaining the essence of the tango.

Did your composing process change for the concerto vs. a film score, considering there’s not a visual reference, or do you approach all your projects the same way?

Next, I’m re-teaming with one of my favorite directors for an upcoming film. I recently finished a double concerto for piano and cello, and my hope is that the positive impact of Tango Manos will facilitate that composition. It’s my belief that music transcends all barriers and has the power to bind humanity, reminding us that we are all one people.

What made you join BMI?

Some of my favorite composers, like Thomas Newman and John Williams, are part of the BMI team and it only made sense after my conversations with Doreen that it was time to join this amazing cache of talent.