Posted in MusicWorld on September 20, 2010 by Russell Hall 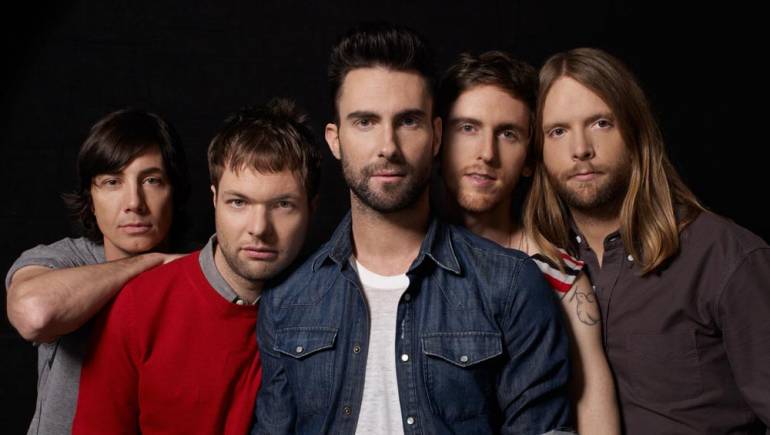 No matter how prepared a band might feel, commercial success, when it comes, can be an unsettling event. Fortunately for Maroon 5, when their 2002 album Songs About Jane went multi-platinum, the group was on firm footing.

“I think we handled it well,” says Adam Levine, frontman for the L.A.-based quintet. “It took us a long time to get there, so when success came, we had a special appreciation for it. We’ve never forgotten how hard it was to attain.”

Indeed, Maroon 5 paid its proverbial dues. Formed in 1994, and christening themselves Kara’s Flowers, Levine, bassist Mickey Madden, drummer Ryan Dusick, and guitarist-turned-keyboardist Jesse Carmichael started out playing pop music described by Carmichael as “the Beatles-meets-Weezer.” The band signed with Reprise Records in 1997 and released one album, which sold poorly, before deciding a new stylistic direction – and a new bandname – was in order. Adding guitarist James Valentine to the lineup, and embracing a more R&B-influenced sound, the group at last hit its stride.

“Funk music is something we had all been into from the start,” says Carmichael. “Parliament-Funkadelic, Herbie Hancock, Prince, and Stevie Wonder were artists we all listened to. Herbie Hancock’s Head Hunters album changed my life, as a musician.”

Songs About Jane garnered Maroon 5 a Grammy Award in the category of – ironically – “Best New Artist.” The band’s follow-up studio disc, 2007’s It Won’t Be Soon Before Long, nabbed the group another Grammy, this time for “Best Pop Performance by a Duo or Group with Vocal” (the band’s second Grammy win in that category, and third overall). With new drummer Matt Flynn in tow, the group solidified its reputation as a superb live act, touring as headliners and as opening act for the likes of the Rolling Stones.

Hands All Over, the band’s latest album, finds Maroon 5 branching out stylistically while preserving enough of its groove-oriented, funk-pop sound to satisfy long-time fans. Recording in Switzerland with legendary producer Mutt Lange at the helm, the group was especially concerned with crafting strong melodies.

“A lot of the songs went through a ‘Frankenstein’ process,” explains Carmichael, “where we would take parts from one song and put them in another. Mutt wanted every part to be like a chorus. He would tell us that the verse has to be super-catchy, the pre-chorus has to be something people will want to sing, and then the chorus has to be best of all. He has a great ear for piecing things together.”

Tracks such as “Misery” and “Never Gonna Leave This Bed” adhere to Maroon 5’s trademark mix of funky guitars, sprite keyboards, and harmony-laden choruses. In several instances, however, the band ventures into new musical territory. Such moments include title track, described by Carmichael as a rock anthem in the traditional Mutt Lange mode, and “Out of Goodbyes,” a country-flavored ballad that has “classic” written all over it.

“At first, ‘Out of Goodbyes’ sounded more Fleetwood Mac-influenced,” explains Carmichael. “But when Adam and Mutt started stacking harmonies, it took on a country feel. Lady Antebellum’s pedal steel and mandolin, along with their vocal harmonies, really took the song into that realm. I’m excited about reaching out to country music fans who may not have heard us.”

Both Levine and Carmichael say they want to continue to explore new styles, but at the same time neither wishes to alienate Maroon 5’s existing fans. “There’s a balance between moving forward and growing, and continuing to do what people love you for,” says Levine. “You want to keep people happy while keeping yourself creatively stimulated.”

Carmichael agrees, adding that there’s no shame in making music that appeals to a wide audience.

“If the music connects with people, that’s great,” he says, “and if it doesn’t, then at least we will have had a great time making music we love. Our philosophy has always been to be real, to be honest, and to do things from a pure place.”