Posted in MusicWorld on January 18, 2012 by Jewly Hight 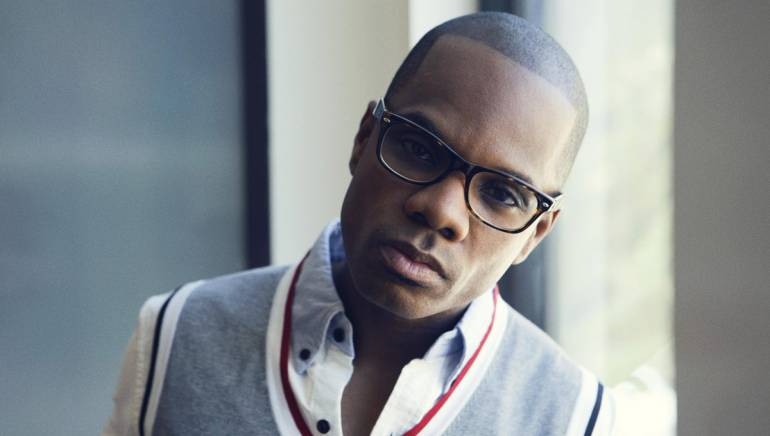 There was nothing at all timid about the words Kirk Franklin delivered as an intro to his 1997 gospel and r&b hit “Stomp (Remix).” “For those of you that think that gospel music has gone too far,” he challenged, stamping every syllable with streetwise churchly conviction, “you think we’ve gotten too radical with our message. Well, I’ve got news for ya. You ain’t heard nothing yet.”

That was the opening track on God’s Property, the rare gospel album to top Billboard’s r&b chart, which arrived four albums—counting a Christmas set—into a career that has continuously and profoundly broadened modern gospel music’s pop cultural impact.

As a kid growing up in Texas, raised by his Aunt Gertrude (for whom his publishing company is named), Franklin took piano lessons, listened to his share of hip-hop—he’s named Run-DMC as an early influence—and led the church choir, though he didn’t necessarily do all of that at once. In adulthood, Kirk Franklin the Grammy-winning, platinum-selling composer-arranger-producer-choir director has made good on his firsthand knowledge of what it takes to forge musical connections with people both inside and outside the church, trend-attuned, tough-to-please teens included.

Franklin pioneered with his approach to bridging hip-hop, contemporary r&b and traditional gospel on his albums, which was no small risk at first; after all, people tend to associate rappers and slow-jam crooners with considerably more carnal concerns.

His twelfth album, 2010’s Hello Fear, is home to everything from spoken word, verging on rap (“The Story of Fear”) to buoyant urban pop (“I Smile”) and a dramatic mass choir showcase (“The Moment #1”). Songs like “I Smile” fit well in the r&b landscape, in part, because Franklin writes them in first-person—the style of most r&b lyrics—while a lot of his more traditional numbers, like his uplifting early ‘90s classic “Why We Sing,” are written in the collective voice, inviting participation from the pews.

Live and on recordings, Franklin inhabits something of a hybrid role—you could call it worship leader/MC—energizing and exhorting singers and audience alike with his bold-faced, spoken insertions.

So it’s really no coincidence that he’s been able to land Salt-N-Pepa’s Cheryl “Salt” James for “Stomp (Remix),” or Mary J. Blige and R. Kelly for his re-reading of Bill Withers’ “Lean on Me”; or rack up appearances on BET’s popular hip-hop video countdown show 106 & Park; or host BET’s gospel singing competition Sunday Best; or see his music embraced by gospel and r&b audiences for going on two decades.

Franklin has almost always done his songwriting solo, though this statement calls for some qualification. He’s often described himself as receiving divine inspiration when he writes songs. In a 2005 interview with Songwriter Universe, he said, “I believe that God is the songwriter and I am the pen,” elaborating “All the music that comes out of me is because God has spoken to my heart—it all comes from Him.”

And coming from a gospel songwriter as successful as Franklin, that’s no timid statement either.

Kirk Franklin was named a Trailblazer of Gospel on January 13, 2012, in Nashville. The award is the highest honor BMI presents to gospel songwriters.