Posted in MusicWorld on May 4, 2008 by Rob Patterson 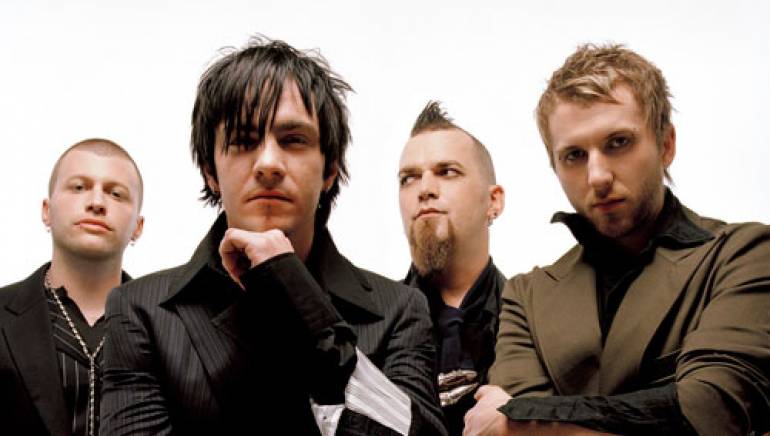 The Canadian alternative metal band Three Days Grace took their name from the final business deadline it implies to convey the sense of urgency within their music. And that characteristic is evident just from the titles of such Top 5 Mainstream and Modern Rock chart hits as “I Hate (Everything About You),” “Animal I Have Become,” “Never Too Late” and “Pain.”

But don’t mistake the young group with two platinum albums to their credit for an act that just expresses their angst. “Though we have some dark topics as to what’s going on with life,” explains guitarist Barry Stock, “I think with Three Days Grace we always have that little twist of hope at the end. ‘Yeah, this is where I am and this sucks, but I’m getting out of it. I’ve found a better way.’ We’ve heard numerous times people say to us, believe it or not, ‘You saved my life.’ Especially with teenagers.”

And it was as teenagers that the core of Three Days Grace — singer/guitarist Adam Gontier, bassist Brad Walst and drummer Neil Sanderson — came together in the tiny Ontario town of Norwood, playing their first gigs in high school. Eventually shifting their base to Toronto, they joined forces with producer Gavin Brown and, thanks to a demo that included “I Hate (Everything About You),” won deals with EMI Music Publishing Canada and Jive Records.

By the time their self-titled debut was released in the summer of 2003, “I Hate…” was riding the top of the Canadian alternative rock radio charts. But the band wasn’t just going to rely on their immediate appeal on record, and set out on an extensive round of touring that linked their airplay with hard-won grassroots live rocking that pushed the album past the million mark.

“We’ve been doing this band since we were 17,” Sanderson says, “and we’ve realized there are no shortcuts. We know that you have to build it from the ground up.”

The years of steady road work did take their toll on singer Gontier, who put what he was feeling into the next batch of songs that Three Days Grace recorded for One-X, their second album. “From front to back, the lyrics of ‘One-X’ explore the different problems I had,” he explains. “I felt singled out. I wanted to be normal and I just wanted someone, anyone to help me. At a point, I finally came to realize that no matter how singled out I felt, there were so many others out there like me. I realized, ‘Okay, I’m not alone’.”

Especially when millions also bought their 2006 sophomore disc and continued to flock to the band’s shows. And as they ready a third album for release, Three Days Grace continue to give their music their all. “We just keep coming back and putting everything into it,” Sanderson concludes. “And it’s paying off for us.”