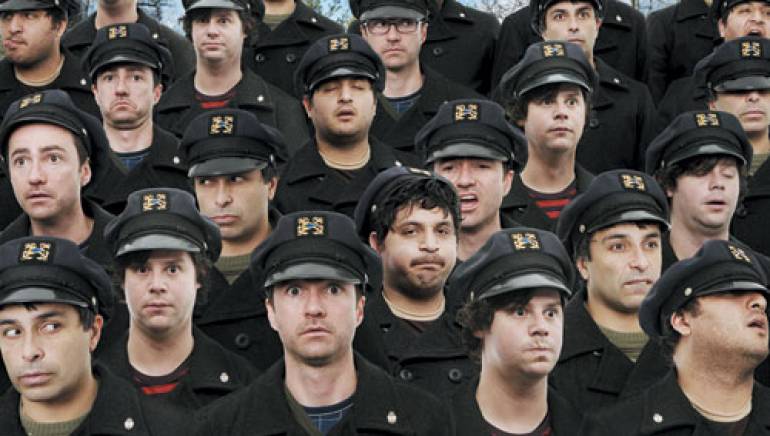 In early 2007, the acclaimed indie-rock ensemble The Shins released their anxiously anticipated third album, Wincing the Night Away, touching off a veritable barrage of flattering reviews. Blender magazine called the album “catchy, literary, lushly produced,” while the indie-rock arbiters at Pitchfork Media branded the disc “a lovely and well-executed album.”

Apparently, fans couldn’t have agreed more. Debuting at number 2 on the Billboard 200 albums chart with over 118,000 copies sold, Wincing the Night Away is the highest charting independent release in the storied history of Sub Pop Records. Considering that Sub Pop is the label that launched the careers of grunge idols like Nirvana and Soundgarden, The Shins’ spectacular chart performance is no small accomplishment.

The new album marks another musical departure for The Shins. Unlike its lo-fi predecessors, including Oh, Inverted World (2001) and Chutes Too Narrow (2003), Wincing the Night Away boasts a decidedly pro-audio sound. Tracks like “Phantom Limb,” “Spilt Needles” and “Sleeping Lessons” frame the exquisite, contemplative vocals of singer/songwriter James Russell Mercer, the well-tempered guitars and keyboards of Martin Crandall, and the supple rhythms of bassist/guitarist Dave Hernandez and drummer Jesse Sandoval.

Formed in Albuquerque, NM in 1997 by Mercer, The Shins released two independently produced 7” singles, “Nature Bears A Vacuum” (1999) and “When I Goosestep” (2000), before going on tour with Modest Mouse. Relocating to Portland, OR, the band signed with Sub Pop Records.

“Caring Is Creepy” and “New Slang,” two tracks from The Shins’ 2001 debut CD, were showcased in the 2004 box office hit Garden State, thrusting the band into the global spotlight. Additional exposure came via various tracks featured on the hit TV series Scrubs, One Tree Hill and The OC.

With the recent recruitment of singer/guitarist Eric Johnson of the acclaimed indie-pop band Fruit Bats, The Shins have extended their creative options. It’s a typically forward-thinking move that helps explain why The Shins are one of the most credible acts in contemporary pop.