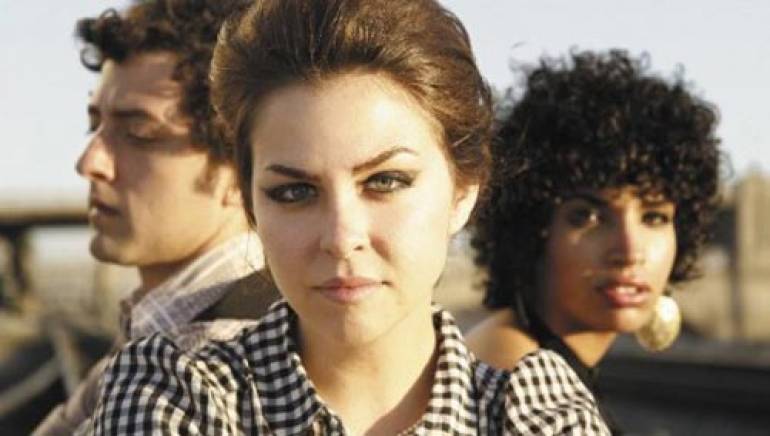 “Boredom is death!” declares Lindsay “Coco” Hames, lead singer/songwriter for THE ETTES.  “You’ll never see us bored… or boring.”  That’s for sure.  Since their inception in early 2004, THE ETTES have taken the world by storm.  Drawing inspiration from early punk and beat bands, such as the Stooges, The Beatles and the Rolling Stones, as well as more melodic ‘60s country acts such as Patsy Cline and Nancy Sinatra, THE ETTES have developed a rock-and-roll sound all their own.

Moving west from NYC, Coco and Poni Silver met up in Los Angeles, California.  Stuck in a new town, they struck up an immediate and explosive musical relationship that quickly earned that ever-elusive “buzz” about town.  After a few evolutions, McCartney-esque Jem Cohen joined the show, and THE ETTES were complete.  Jem’s garage background—and Poni’s powerful punk rock beats—fused with Coco’s ‘60s country vocals to create a whole new rock-and-roll sound that has been blowing people away from the US to the UK and beyond.

Reviews on THE ETTES’ live show regularly comment on the high performance level and stage presence of the band.  All longtime performers, THE ETTES are right at home on stage.  Poni, on her violently powerful live drumming: “Sometimes it’s an accident”, she suggests. “Other times, I might be trying to attack you. You never can tell.”  And with Jem’s melodic lead bass playing, THE ETTES have evolved even further, thrilling audiences with the talents that make them such a powerhouse.  “All we can be are ourselves,” shrugs Coco.  “And we’re good at it.”

THE ETTES’ sharp but good-natured sense of humor recalls the ever-present ribbing and creativity that flowed through early Beatles footage.  Individually and collectively, THE ETTES just have something about them, and the world has taken notice.  Presented by KCRW in NYC, a favorite of KXLU, WFMU and INDIE 103.1, THE ETTES have won over radio all over the place; even BBC Radio 1’s Steve Lamacq is a fan.  THE ETTES tour relentlessly, sharing the stage with such acts as THE BLOOD ARM, THE CONSTANTINES, THE NEW YORK DOLLS, THE MUFFS, and THE GO-GO’s to mention a very few.

On September 12, THE ETTES’ debut album “Shake the Dust” is available worldwide (Sympathy for the Record Industry), from stores like Amoeba, Virgin, Tower, and Rough Trade to online shops such as Amazon.com.  Recorded at Toe Rag Studios in London with Liam Watson (the White Stripes, Billy Childish, the Kills) “Shake the Dust” is pure ETTES:  energetic, electric, and totally new.  Even before its release “Shake the Dust” is blasted from radio stations and Podcasts (including from BMI and Music Plus), and with their appeal spreading to television, film and all over the Internet, there’s no telling what’s next for THE ETTES.  The sky is the limit.

Filter-lauded buzz band THE ETTES hit the road in September supporting the release of their debut album “Shake the Dust” on Sympathy for the Record Industry (September 12).  Recorded at Toe Rag Studios in London with Liam Watson (the White Stripes, the Kills) “Shake the Dust” has the energetic three-piece flaunting influences from the Stooges to Patsy Cline, with a healthy dose of Stones for good measure.

Catch THE ETTES live this fall with the Purrs (Sarathan) and the Village Green (Spinart) in a town near you.

15 – Music Plus TV w/ Veruca Salt and The Spores

* w/ The Purrs and The Village Green

LABEL: Sympathy for the Record Industry