Posted in MusicWorld on June 24, 2011 by Ted Drozdowski 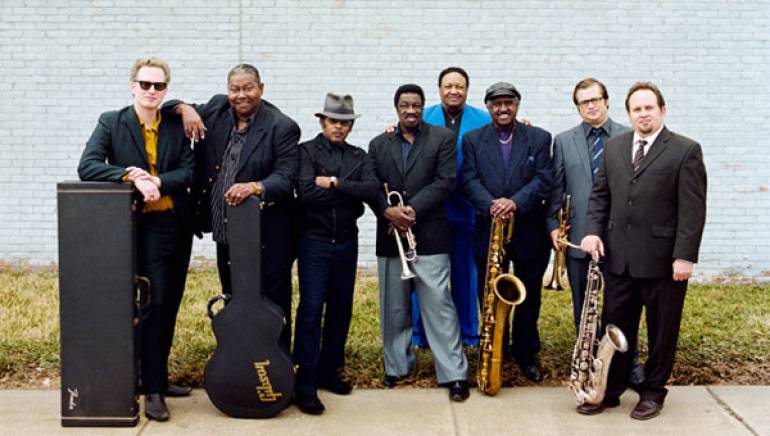 The late Memphis music genius Jim Dickinson theorized that the city’s spirits — from its historic musicians to the buffalo herds that once roamed the bluffs along the Mississippi River — linger on to provide inspiration for today’s seekers.

If that’s true, the Bo-Keys’ leader Scott Bomar must be a medium. The BMI songwriter, producer and bassist has the uncanny ability to channel the sounds of Memphis’ R&B past while staying focused on the present.

Bomar and his nine fellow Bo-Keys create fresh old-school grooves on their second album Got To Get Back!, adding heat — alongside fellow torchbearers Sharon Jones, Black Joe Lewis and Nashville’s Dynamites — to the ongoing deep soul renaissance that’s nudging the tradition-grounded genre toward a new audience.

“This music has never gone away, but there is more focused appreciation for it again,” Bomar attests. “And there’s nothing like seeing a great soul band with horns, a B-3 organ and a great singer. The music is real, it comes from the heart and anybody can hear it speak to them.”

The Memphis native heeded soul’s call as a child after he found his mother’s record collection, chock full of regional 45s from the 1960s. “I started emulating the sounds I heard on guitar and piano, and switched to bass because I wanted to start playing in bands as soon as possible and there were already too many guitar players,” he relates.

His first group, the all-instrumental Impala, hewed closer to a surf ’n’ Sun Records sound, and became a favorite with music supervisors. Bomar’s first indie movie soundtrack led to his invitation to compose the incidental music for the acclaimed Craig Brewer films Hustle & Flow and Black Snake Moan, which allowed Bomar to explore his more modernist regional interests in hip-hop and electric blues from the nearby Mississippi hills. His score for the Civil Rights-era documentary I Am a Man: From Memphis, A Lesson in Life recently won an Emmy. Bomar also co-produced Cyndi Lauper’s 2010 album Memphis Blues and Al Green’s 2003 I Can’t Stop.

But Bomar seems most at home with the Bo-Keys, which he formed in 1998 with Stax and Hi Records session men Skip Pitts on guitar, Howard Grimes on drums and trumpeter Ben Cauley as an all-instrumental group ala Booker T. & the M.G.’s. The new Got To Get Back! adds vocals to the mix, provided by William Bell, Percy Wiggins and Otis Clay — three more powerhouse veterans of soul’s salad days.

“Working with musicians of their caliber has provided me with a fantastic education,” Bomar says, “and it’s a constant reminder of where the ‘soul” in soul music comes from.”