Posted in MusicWorld on March 23, 2006 by Malcolm Venable 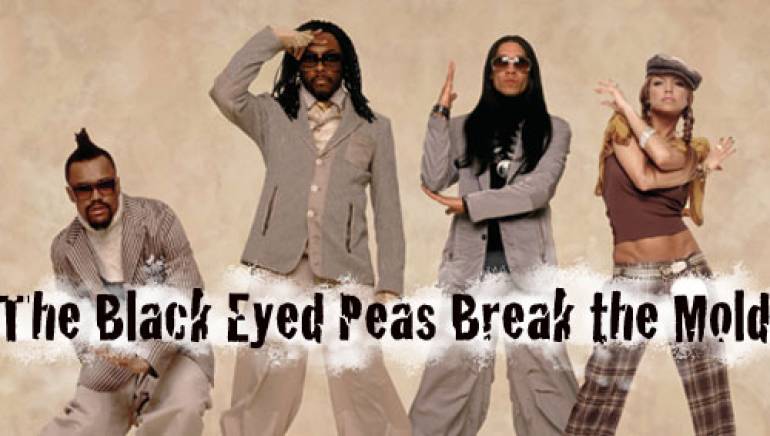 Originally two break-dancers named Will.i.am and apl.de.ap who decided to form a group, the Black Eyed Peas is without a doubt one of the biggest success stories in hip-hop, if not all of contemporary music. Once called Atban Klann (an acronym for A Tribe Beyond a Nation), the group that became BEP has always been a multi-cultural, multi-ethnic conglomeration of Los Angeles hipsters with an eye toward social relevance and an ear toward organic music. Only now, they’ve got street cred, the respect of the hip-hop intelligencia and the commercial viability that eluded them since they formed a decade ago.

Will and apl recorded an album under Eazy-E’s Ruthless Records in 1992, but Atban Klann found their project shelved by a label that wasn’t sure what to do with rap devoid of roughneck themes. With Eazy’s death in 1995, the group’s future looked bleak. But they pressed on, adding another dancer/rapper, Taboo, and reemerging as the Black Eyed Peas. The group gigged around L.A. and, in 1998, released Behind the Front. Not only did the group have a totally original look and Stage demeanor — they’re still the only group to hold up break dance as one of the important features of hip-hop — they managed to please critics with their mishmash of uplifting lyrics, live music and lighthearted jams. The album was one of Billboard’s Top 50 Hip-Hop albums that year, and it introduced the group to a fan base of smart hip-hoppers nostalgic for thoughtful raps.

Bridging the Gap, their second effort, was an apt title, since other, more established quirky hip-hop stars like De La Soul and Macy Gray rallied around them. Now BEP was filling a space left by the demise of playful innovators like A Tribe Called Quest. Vocalist Kim Hill’s presence was felt a bit more strongly, helping the warm, festive project climb both the Billboard Top 200 and Top R&B/Hip-Hop charts.

Then, in 2003, everything changed. Buoyed by “Let’s Get It Started,” Elephunk sold 7.5 million albums. It was an astonishing feat for a group that got its start as a break-dancing crew. This go-round, new female singer Fergie was front and center, adding a bit of sex appeal to the previous, decidedly male-centric arrangement. The Peas’ devotion to pushing boundaries and, as their funky clothes attest, drawing inspiration from everywhere, was interwoven into their act.

Reggae, Latin and rock are obvious forces on the record, and even the members’ nationalities — Will.i.am is African-American, apl.de.ap is Filipino, Taboo is Mexican-American and Fergie is Native- and Mexican-American — played into the mix. One of the album’s songs, “The Apl Song,” with the chorus written in the Filipino language Tagalog, documents apl’s life story. Even more telling of their world view is their success overseas: The group toured the world for 18 months, and though the album went double platinum in America, singles “Where is the Love,” “Shut Up” and “Hey Mama” all went higher or spent more time at the top of the charts in the U.K., France and Germany than they did at home.

Now a worldwide phenomenon, the BEP party keeps on rolling with their latest release, Monkey Business, which debuted at #2 on the Billboard Top 200 Album chart, selling over 295,000 copies in its first week. Monkey Business includes cameos by James Brown, Sting and Branford Marsalis, and marked a pointed move by the group towards a mainstream audience.

The Black Eyed Peas have broken molds and refused to bow to boundaries. “I think the fact that we just have fun with music is the reason why it works for us,” says Will.i.am. “We love music and melodies and don’t try to distinguish ourselves from regular music fans. It’s really that simple.”