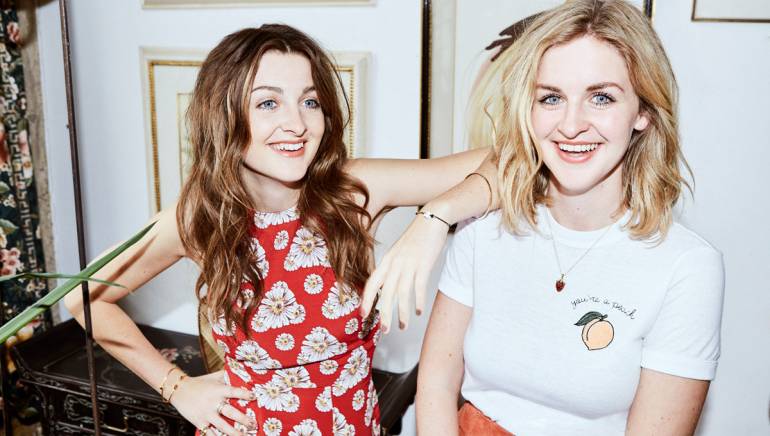 Ward Thomas, comprised of twin sisters Lizzie and Catherine, had a feeling that “Cartwheels,” the title track of their sensational second album, was special. What they didn’t know was that the record would soar to the top of the UK Album Chart, making them the first ever UK country act to do so.

“Cartwheels” the song, tells the tale of someone who refuses to accept that a relationship is over, who longs to be noticed, but is only ignored, who “bends so we won’t break.” It’s both heartbreakingly sad and sonically beautiful. “All of our lyrics are personal,” says co-vocalist Catherine, “but ‘Cartwheels’ was the most brutally honest we’d ever been. No one wants to admit they’re that needy, that they’re prepared to do anything to save a relationship they know deep down is broken. Being able to share those emotions with an audience is incredibly powerful.”

After a debut EP caught the ears of some of country music’s biggest stars, among them 20 time-GRAMMY Award winner Vince Gill, From Where We Stand, the duo’s first album, was completed and recorded in Nashville, but remained distinctively British.

Its No. 1 selling album follow-up, Cartwheels, has roots in the country music capital, but only because it was where Ward Thomas clicked with their current co-writers - Brit Jessica Sharman and Rebekah Powell, the Nashville-bred daughter of revered hitmaker Monty Powell. With “Cartwheels” written, Ward Thomas returned to Britain, where their songs were all over radio and where they spent much of the next 18 months on tour.

The remainder of the new album was written and recorded in London, produced largely by Martin Terefe (KT Tunstall, Jason Mraz, Shawn Mendes), and partly by Jimmy Hogarth (Amy Winehouse, Paolo Nutini, Sia). “It established our new sound,” says Lizzy. “Lyrically, it was much more grown-up than anything on our debut. Sonically, it was a move away from country to lots of other influences we grew up with – Fleetwood Mac, The Beatles, KT Tunstall, some Kelly Clarkson, Taylor Swift’s Red album. We’re still influenced by country, we still adore the Dixie Chicks and Kacey Musgraves, but this isn’t just a country album.”

The biggest change, however, was that the teenagers became adults. With their co-writers, they were four young women, sitting in a room, pouring their hearts out. They didn’t think in terms of genre, but of stories, emotions and coping mechanisms. They wrote about situations they had either experienced themselves or seen their friends go through, capturing everything from friendship to despair, loneliness and heartbreak to the joy of moving on.

Cartwheels the album, contains a “cartwheel” of emotions, and BMI is proud to stand behind every one as we represent Ward Thomas’ British eclectic sound in the U.S. We recently caught up with the sisters in the midst of their whirlwind ride and asked about their record-breaking success. Here’s what they had to say.

Your music has been called an American sound with a British twist. In what ways are your lyrics British?
We don’t think they are particularly British lyrics, I think we mainly write about our experiences and feelings. We tend to avoid American exclusive things, like cowboys, trucks and old dirt roads!

What made you want to explore the country genre and what did that entail?
It has always been a very authentic genre. The songs are about family, home, love and heart breaks and we love that!  We first discovered the genre when our Canadian cousin Libby came to stay with us and she showed us The Dixie Chicks.

Why do you think the U.K. and Europe are now ready for a country album to go to #1 for the first time as this one did? How have the musical tastes of listeners in the region changed?
I think that as a country we have been more exposed to country music recently. It’s much less of a gimmick and more of a genre that people enjoy. The Nashville TV series has been great for the genre and really starting to show that Nashville is really cool and the music coming out of it is great!

When you wrote Cartwheels, your second album after From Where We Stand, what were your musical goals?
When we started writing Cartwheels we wanted to develop our sound and the song “Cartwheels” was the clear start in the direction we wanted to go down. Our goals were merely to create a strong album that we were really proud of and to even chart in the top 40 would have been amazing!

How do you two differ and how are you the same musically?
In personalities we are very different in ways, but we are also very similar. We have always shared the same friends and hobbies, but in a way I (Catherine) am more calculated and maybe more risk adverse, whereas Lizzy is more emotionally driven and easy going. I think we work really well musically because of that difference.

What’s up next for you?
We are about to hit the road to tour the UK and Ireland and then hopefully a new single will be out in the new year, followed by a spring tour, maybe!

Why did you choose BMI to represent your music in the states?
We had heard brilliant things about BMI from a few people we know and we saw that it was the largest music rights organization in the USA!! It seemed a bit of a no brainer really!