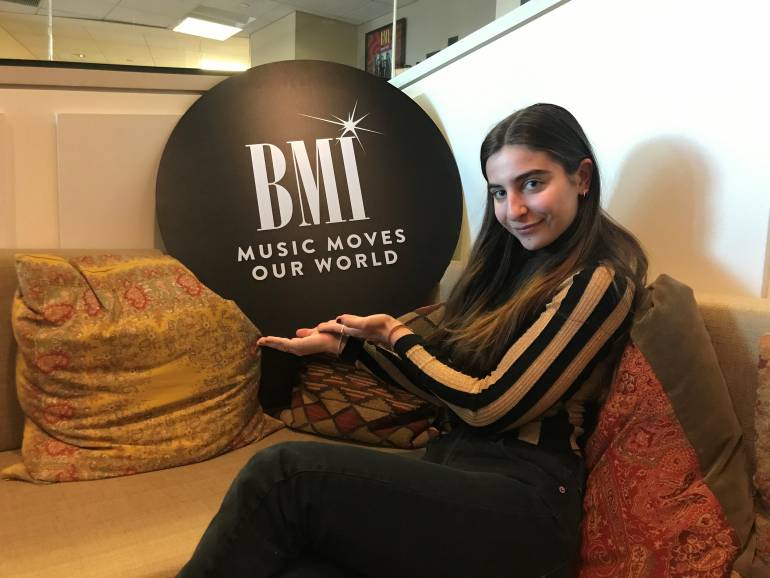 Hailing from New York City, up-and-coming singer/songwriter Celia Babini is a name to watch. A student at the renowned Fiorella H. LaGuardia High School, Babini had been recording original songs and posting them on Soundcloud, eventually releasing her first EP, Lola, in 2017.  Currently a contestant on NBC’s The Voice, the aspiring talent wowed viewers and judges alike last month, with her head-turning (and all-four-chair-turning) rendition of Billie Eilish’s “idontwannabeyouannmore.” Babini’s stirring performance has sent ripples emanating beyond the hit show’s viewership, leading many to speculate that we should expect more from this promising young artist.

We caught up with Babini during a recent visit to the BMI offices, and we took the opportunity to fly a few questions by her. Here’s what she had to say.

Your Instagram page features pictures of John Lennon, The Beatles, The Rolling Stones, Jimi Hendrix, The Who. How have these artists informed your own songwriting?
I grew up listening to music from the 60s and 70s, predominantly the artists you mentioned. They have definitely influenced my songwriting process. Those decades birthed some of the most influential songs of all time, both melodically and lyrically. The time was one of a lot of political and cultural changes, which ultimately fueled the music to have important and powerful messages. They have definitely raised my standards as to what “good” songwriting is. They have inspired me to write music with a message, whether that be political, cultural, or personal, every song I write is about something I am passionate about. They taught me that pushing boundaries and evolving in music is a crucial part of being an artist.

When did you first know you wanted to be a singer/songwriter?
I do not remember a time where I did not know that this is what I wanted to do. I started writing at six, even though I could barely spell. It was very natural. If I felt something, I would write a song about it. It has always been a part of me.

How did growing up in New York City factor into your forming your musical path?
New York is a very creative place and a huge part of who I am resides in the city. New York has impacted me and therefore morphed my music. It exposed me to hundreds of different cultures. I think growing up in New York has allowed me to be open minded and experimental. There is no “box” of who you’re supposed to be here. I was allowed to have many phases as a person/musician, and the city always nurtured them. If I was into jazz, my dad snuck me into jazz clubs, if I was into rock, I could go to listen to rock music. The city inspired me to write about the things I was seeing, hearing, doing. It helped me flourish.

Name a song you wish you’d written and why?
This is one of the hardest questions I have ever been asked. Honestly, I don’t have one. The reason I love my favorite songs so much is because of the energy the artists brought to them. I would never want it any other way. BUT, I wish I was in the room while Bob Dylan and Johnny Cash record “Girl from the North Country.”

What’s the biggest misconception about competing on The Voice?
The biggest misconception is that we are all very competitive with one another. We are all there for the same reason, we are all trying to pursue our passion. An intense family-like bond has formed. We are going to support each other until there is only one of us left. In a high pressure environment, It is so much easier to be kind and loving with those around you then to try and take them down. I have made some friends for life.

What’s more fulfilling? Performing or writing?
I would say they are pretty equal. It is amazing when you write a song you love, and just as amazing to sing that song for others. For me, there is an equal amount of feeling and emotions when I write and when I perform.

Where are you most comfortable being creative?
In my bedroom or in nature.

Instrument of choice?
Guitar or piano.

Acoustic or electric?
It depends on my mood. I write on acoustic more though.