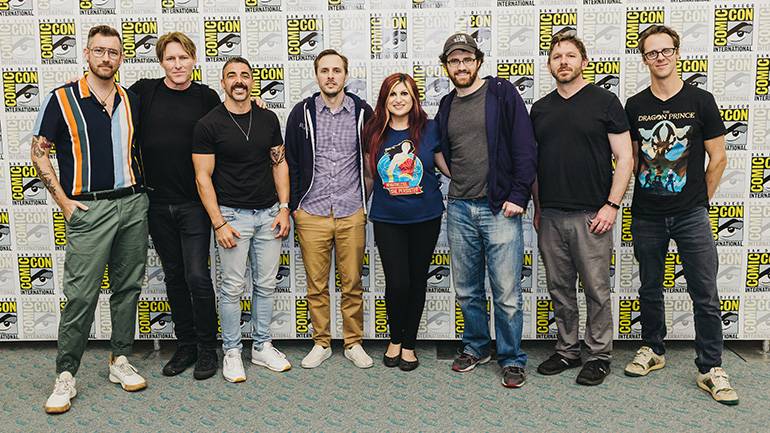 BMI and White Bear PR brought together a talented group of composers and directors for the “Character of Music” panel at Comic-Con’s 50th anniversary on Friday, July 19, at the San Diego Convention Center. The all-star line-up included renowned BMI composer Tyler Bates (R.U.N) and the director of Cirque du Soleil’s new live-action thriller, R.U.N., Michael Schwandt; Emmy-winning BMI composer Frederik Wiedmann, along with showrunner Aaron Ehasz (The Dragon Prince); and two-time BAFTA-winning composer Austin Wintory (“Abzu”) with video game director Matt Nava (“Abzu”). As one of the most popular events, this year’s panel, which was the ninth edition of “The Character of Music,” brought in a full house of attendees that included a mixture of emerging composers, directors and music fans, with BMI’s Anne Cecere and White Bear PR’s Chandler Poling co-moderating.

During the discussion, panelists touched on several key elements that go into producing a successful score for movies, live shows and video games, along with the key ingredients of a productive, creative relationship between composers and directors. Specific topics included Wiedmann elaborating on the early stages of harmonic development for the characters in The Dragon Prince, while Ehasz emphasized the importance of finding a composer who can be brilliant and fast when scoring for television. Bates and Schwandt expanded on music’s vital role in the live-action thriller R.U.N., written by Robert Rodriguez as Wintory and Nava discussed the benefits of developing a short cut piece in the initial stages of game scoring to align visions. The panelists also answered questions from the audience who received limited-edition swag from the composers.