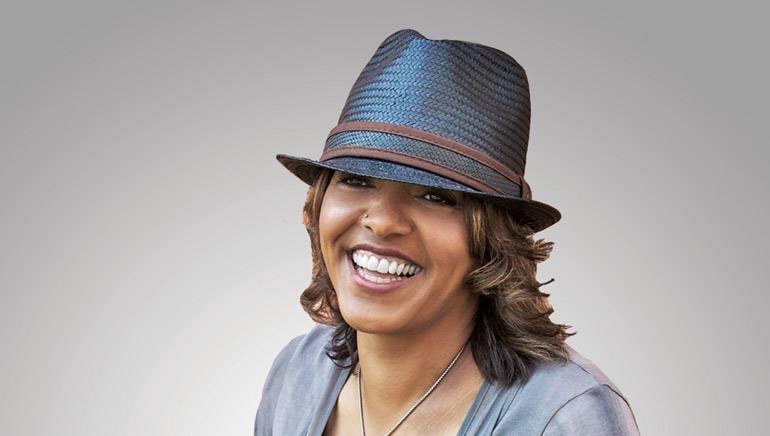 Three-time GRAMMY winning musician, songwriter and producer Terri Lyne Carrington has always had an incredible passion for music. As a child, her budding talent placed her alongside some of the biggest jazz musicians in the world at an age when most girls are playing with dolls. Her father, Mat Carrington, was a noted jazz saxophone player, and he introduced his prodigious daughter to jazz legends like Dizzy Gillespie, Keith Copeland and Clark Terry, all of whom she played with before her 10th birthday.

But Carrington was just getting warmed up. In a career that spans more than four decades, she’s shattered glass ceilings as a female drummer and bandleader — you may recognize her from her stints as the house drummer on The Arsenio Hall Show and on Quincy Jones’ VIBE — and as the first female artist to win a GRAMMY in the Best Jazz Instrumental Album category. She’s played, toured and recorded with artists including Herbie Hancock, Wayne Shorter, Dianne Reeves, Stan Getz, Stevie Wonder, Joni Mitchell, Cassandra Wilson, Pharoah Sanders and Nancy Wilson.

Terri is also passionate about mentoring young musicians. She holds an honorary doctorate from her alma mater, Berklee College of Music, where she currently teaches, leading and inspiring the next generation of artists. We caught up with Terri and talked about her songwriting process, the fight for gender equality in the music industry, and where she displays her GRAMMY awards.

You grew up in a very musical family. Can you share a little about your family’s musical talents and how you first started playing the drums?

My grandfather played drums, and my father played drums and saxophone. I started playing saxophone with my dad when I was 5, and switched to drums. My grandfather passed away before I was born so I didn’t meet him, but his drums were still in the house and I started playing them when I was 7. My dad knew everybody in jazz — I know that’s a big statement, but he almost really did! So when people would come through town, he would take me to see them when I was kid, and he’d tell them I could play. So a lot of it was based on his relationships.

Is that how you had your first major public performance at the age of 10?

My first public performance was on sax at age 5, but my first professional performance — where I actually got paid — was when Clark Terry brought me to Wichita, Kansas to play the Wichita Jazz Festival when I was 10. I was a guest, the drummer was Louie Bellson, and there were a lot of great jazz musicians like Eddie “Lockjaw” Davis, Al Cohn, Dianne Reeves.

At what age did you start writing songs?

I always wrote songs — they weren’t very good in the beginning. [Laughs.] My grandmother had a piano, and she lived downstairs from us, so I’d go down there and play her piano and I’d start writing. I also had a bass, so I’d write a bass line, and that was the beginning of the song … I was probably 11 or so.

It sounds like you always wanted to be a musician.

Absolutely, always. It’s funny, because I play the drums — and that’s what a lot of people know me for — but I used to get more satisfaction from writing and singing than I did even from playing. Even to this day, when I write a song, it’s a different kind of satisfaction. It’s not necessarily what my claim to fame was. Being a drummer, there are stereotypes about drummers not writing as much, so it’s definitely more difficult. But I write more what’s in my head and not actually what I can play on the piano, so there’s something to that as well — it just takes me a little longer.

Do you collaborate with other songwriters or do you prefer to write alone?

I’ve always done both. I write lyrics and I write melodies — it depends what the song needs, and it depends on that collaboration. It’s not like I always write the music and someone else writes the lyrics; it’s always different.

Let’s go back to your debut album, Real Life Story, which was nominated for a GRAMMY in 1989. What was it like to be recognized by The Recording Academy right out of the gate?

That was an amazing experience. The problem is, at age 23, it’s your first record, so you start thinking, ‘Oh, this is normal!’ It was actually much more sweet the next time I was nominated, [in 2011] for The Mosaic Project, only because I was in my 40s as opposed to my 20s. And a lot happened in that time. [Laughs.] So I definitely appreciated it more and realized all of the work I had done to that point. It was a great feeling.

You’ve collaborated with some of the biggest names in the business, and you’ve been working for more than four decades … there still aren’t a lot of female drummers out there. Are there any obstacles you faced or still face as a female drummer in the jazz world, or in the music industry in general?

I’ve done a lot of work in that area these days, trying to make it so it’s not such an oddity for women to play what’s traditionally considered a male-dominated instrument in the jazz world. Most mediums have been totally dominated by men for so long, and with what’s happening now socially around equity for women, it’s a great thing. It’s going to take a lot of work to bring justice in that area to women in music. I’m really trying to bring awareness as much as I can to people.

If you think about it, women are almost 51 percent of the population in the United States, and a very, very small percentage of that are working musicians. It wasn’t as hard for me as it was for many women just because of the relationships my father had, but every woman doesn’t have that opportunity. I think it’s going to take more mentoring — not just women for women, but also men mentoring women — to really create the balance that I think is needed in music. If there was more of a balance between male and female creators of music, I think the music would sound different. Because even though people don’t say it, when people accept me, it’s because in their mind I play like a man. I think that’s inherently part of the problem, so hopefully, these days, these times will help shape a new legacy for music.

It’s an interesting and exciting time. I think that people will get on board with this possible new paradigm coming, and I think they’ll be left behind if they’re not. I’m sorry that it took this long — for me personally — but it wasn’t until this movement that I actually started trying to make some shifts, like my initiatives with Berklee College of Music. By just having a meeting with a women’s jazz organization — a student organization — at the College, they started telling me their horror stories. It really lit a fire under me to try to do whatever I can to make sure that they have more female peers, because I didn’t have many at all.

Let’s talk about your role with your alma mater, Berklee College of Music. How do you balance your responsibilities as an educator and an artist?

Right now I serve as Zildjian Chair of Performance, a guest resident artist, and I teach 13 weeks a year in the Berklee Global Jazz Institute under the leadership of Danilo Pérez. It’s not as insane as having a weekly class, so I’m able to work my schedule around those 13 weeks, and I also have a summer program I’ve been doing for 10 years called the Summer Jazz Workshop. And now, this summer, I’ve started a new workshop called Summer Sessions, a women’s performance program. It’s for eight students that will have an intensive, full-scholarship program for five weeks. I’m excited about this inaugural year.

If I think about it, after 10, 12 years of teaching at Berklee, I’ve had very few female students. Many of the students I’ve mentored have been male, but I am trying to make sure I have balance with some of these initiatives.

You’ve also had some pretty high-profile television gigs as the house drummer on The Arsenio Hall Show, and Quincy Jones’ VIBE show. Is it different performing in front of a TV audience as opposed to playing a show?

Performing is performing, but the thing with television is, you have very little time — maybe 10 seconds, 15 seconds, 30 seconds — and you learn how to really get to the point quickly. When it goes to commercial, you’ve got just a little bit of time to get it in, so the energy and excitement has to be there from the beginning. That was a great experience for me, both TV shows, and I really enjoyed working in television. I might even do it again if the opportunity came. I think I like it the most because you don’t have to travel. [Laughs.]

You mentioned earlier that you’re working on a new album.

Yes, I have a new project called Social Science. It’s all about what’s happening socially and politically, the things that we’re concerned about. So it’s a relatively heavy record, but hopefully with the music it’s not too heavy. I really want it to come out this year, so I’m trying to hurry up and finish it. I think we’re two-thirds of the way finished.

April is Jazz Appreciation Month in the U.S. Do you have any special performances planned?

I play International Jazz Day almost every year. This year it will be in St. Petersburg in Russia under the helm of Herbie Hancock, and it’s streamed every April 30th, so that will be a big show.

How did you originally start working with BMI, and how has BMI impacted your career?

I don’t remember how I started, it was so long ago — in my 20s — but I had to pick an affiliation and somebody recommended BMI. I’ve been with them ever since. They have a jazz writers’ workshop, and if you’re a composer you can go hear your music played by some strong musicians in New York. Things like that are really important for jazz writers and the jazz community, because we’re always searching for support and for ways to get our music heard, to hear it, and to work it out.

Where do you display your three GRAMMY awards?

Yeah, I have a deep red piano, a pretty piano, but it’s prettier with those three GRAMMYS on top. [Laughs.] And it’s even prettier when I write a good song.