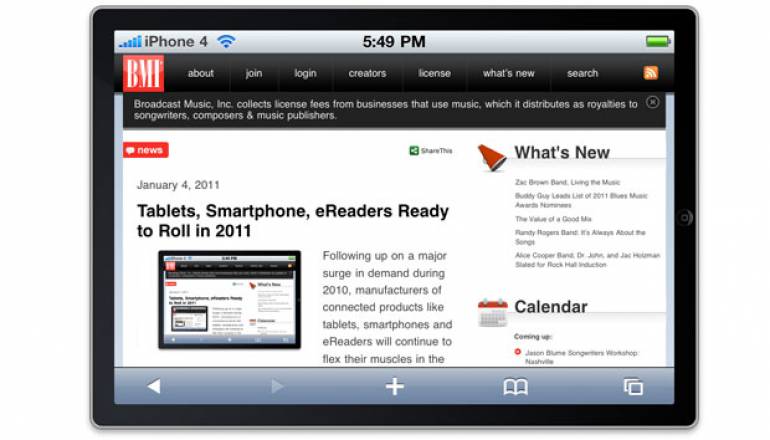 Following up on a major surge in demand during 2010, manufacturers of connected products like tablets, smartphones and eReaders will continue to flex their muscles in the coming year, with sales of tablet computers poised to set the pace throughout 2011 and beyond. Meanwhile, media firms, advertisers and other industry leaders are trying to determine who is making the most of these mighty midgets — as well as the most effective means of cashing in on this burgeoning marketplace. As Richard Conlon, BMI Senior VP, New Media/Strategic Planning, points out, while specific services and applications may come and go, there is one constant: More people are consuming more music and more audio-visual entertainment than ever before.

Room to Move
On balance, the market for connected devices is still in its nascent phase, according to a study by Nielsen entitled “The Increasingly Connected Consumer.” Smartphones, currently found in one-quarter of all U.S. households, maintain the highest penetration rate; however, at 4 percent, 6 percent and 8 percent respectively, tablet computers, ebook readers and netbooks have only just begun to break into the business. Tablet users appear to be the most committed to the connected world, owning upwards of six different connected devices on average, says Nielsen.

When it comes to accessing online video or reading content, size definitely seems to matter. One-third of iPad owners, for instance, indicated watching up to two hours of video per week, compared to the 40 percent of iPhone owners who spend just 15 minutes per week on average squinting at movie downloads; tablet users also spend at least twice as much time flipping through e-books and online magazines. (Smartphone users, however, listen to slightly more online music than their tablet-owning counterparts.)

Meanwhile, young users continue to fuel demand for application downloading, a trend that is unlikely to change over the near term, according to Nielsen. Free apps like Facebook, YouTube and Pandora rank near the top of the list, as do paid gaming, music and reading apps.

Tablet Takeover
Despite the continued streamlining and increased affordability of such portable media devices as Apple’s reigning champ, the iPod touch (version 4G, released last September, puts iPhone features in your pocket for as little as $200), experts say that the tablet will ultimately become the ruler of the connected world. Shipments of tablet computers are expected to reach 81 million over the next five years, according to UK-based mobile research firm Juniper Research. North America and Europe will lead the way in tablet usage, with sales increasing nearly four-fold through the period, says Juniper.

“From the handful of tablet launches to date — Apple, with its iPad, Dell with the Android device Streak, and Samsung with the Galaxy Tab — it is becoming increasingly clear that the tablet device is already exerting itself as a device category with the potential to reach significant sales volumes in coming years,” notes Juniper in its recent report, “Tablets and Connected Devices —Future Opportunities for Business.”

While netbooks will likely cede some market share to tablets as they grow in popularity, sales will not be significantly impacted, as users seek multiple tools for different applications, rather than rely on a single multi-purpose device. Netbooks (and laptops) will remain the weapon of choice for word-processing and other major tactile computing functions, with the tablet becoming the main clearinghouse for data-consumption while serving as the key link connecting home computer and smartphone, says Juniper. Meanwhile, the emergence of the tablet will promote increased development within the smartphone arena, including “the creation of an app ecosystem and advances in user-interface design to be spread to a wider circle of devices,” predicts Juniper.