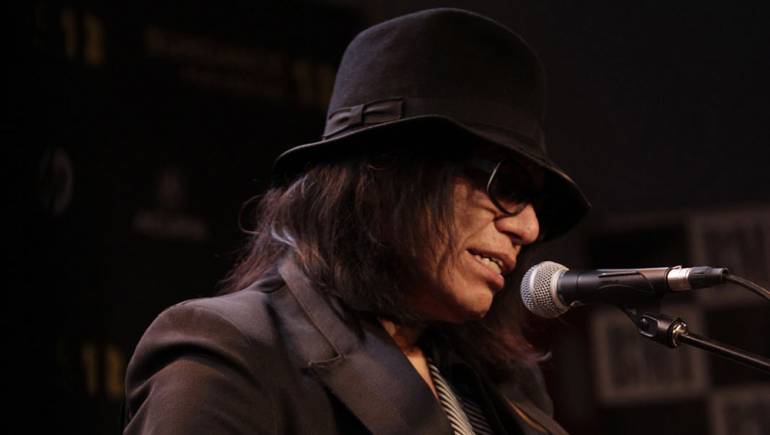 When Rodriguez took the stage to perform at BMI’s 8th annual Sundance Snowball, he was every bit the awe-inspiring rock poet first introduced in his 1970’s recordings. The only difference is now, everyone knows it.

Born in 1942 in Detroit to Mexican immigrants, Sixto Diaz Rodriguez released his first single in 1967, and followed with two albums on Sussex/A&M, 1970’s Cold Fact and the following year’s Coming from Reality. Songs like “Crucify Your Mind,” “Rich Folks Hoax” and “Sugar Man” are haunting, subversive vignettes of society’s victims. Rodriguez’s lyrics are layered over robust rock-and-roll – sometimes straight-up, other times experimental – and r&b worthy of the songwriter’s hometown. While many critics warmly received the work, Rodriguez struggled to find an audience in the U.S., and he was ultimately dropped from the record label.

Rumors of a tragic death swirled – some said that Rodriguez had lit himself on fire on stage after a bad show. Others whispered that he’d overdosed. Then gradually, Rodriguez and the rumors both faded into obscurity.

A bootleg copy of Rodriguez’s songs found their way to South Africa, where his music resonated with a people facing apartheid and struggling for equality. Without even knowing it was happening, Rodriguez became one of that country’s most beloved and powerful artistic voices.

In the 90s, two South African journalists became interested in Rodriguez’s story – what had happened to this guy, anyway? Stephen “Sugar” Segerman and Craig Bartholemew began digging and were rewarded with a fairytale discovery. Rodriguez was very much alive, living and working in Detroit. The two brought him to South Africa, where he would perform for thousands of adoring fans, then return to construction jobs in his hometown.