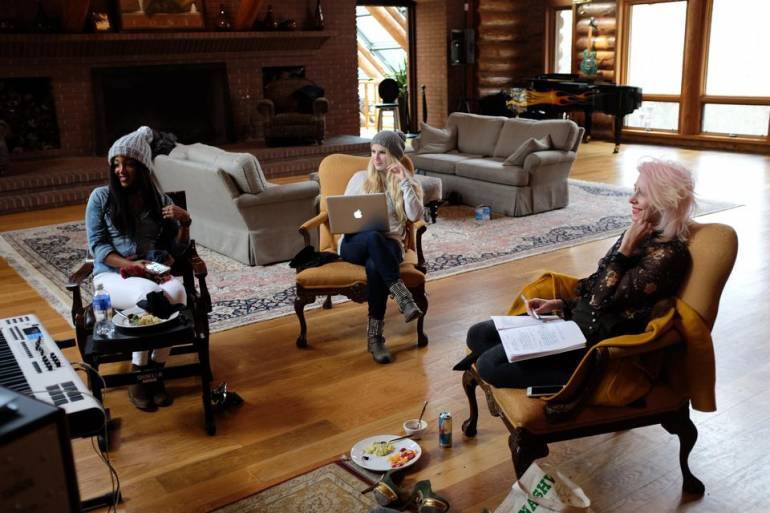 “Writing up” is the term used to describe collaborating with writers who are higher up on the proverbial ladder, and it is among the most effective things we can do to improve our writing skills and forward our careers. For an unpublished writer, it might entail collaborating with songwriters who have signed one or more single song publishing agreements; writers who are currently–or have previously been–signed to an exclusive (staff-writing) publishing deal; or writing with someone who has had their songs recorded and commercially released. For writers currently signed to publishing deals, and for those who have had their songs recorded, writing up typically means collaborating with those who have had more successful–or more recent–recordings.

The challenge is that regardless of their level of accomplishment, everyone wants to write up. Songwriting is a competitive business, so it does not behoove a writer to collaborate with someone whose credits do not match or exceed their own—unless they believe they will reap benefits by doing so. So how do we entice someone who is more successful to write with us?

The best thing we can do is bring something to the table: an exceptional title, a fresh lyric concept, an irresistible melodic hook, or a music backing track that sounds destined to be a hit. Writers who are further along might also be inclined to collaborate with writers who show potential as a recording artist or producer. Some established writers enjoy the energy, enthusiasm, and fresh ideas a new writer can contribute.

You are more likely to attract a co-writer who is one or two rungs above you on the ladder than one who is perched at the top. But in some instances, truly exceptional ideas have opened some very big doors. A prime example is “Wish You Were Here” (recorded by Mark Wills and written by Debbie Moore, Skip Ewing, and Bill Anderson). Debbie Moore had never had a song recorded when she came up with the concept that was the basis of this lyric. But the idea was so strong it induced hit writers to come on board. The result was a #1 country song.

When I was near the bottom of the totem pole at the publishing company I was signed to, in several instances, I came up with strong titles and lyric concepts that led to my collaborating with writers who had written strings of #1 singles. I’ve seen quite a few of my students benefit in similar circumstances. Those who are not signed to publishing deals might meet successful writers by attending music industry events, songwriting festivals, and writers’ nights.

When approaching a potential cowriter, a low-key pitch is best. Don’t hand them a CD of your work unless it is requested. It is important to not come across as pushy or over-eager. Over-hyping your abilities can be a turn-off. It can be effective to suggest, “I have a strong idea and I have a feeling we might write it well together. Would you be open to hearing some of my work?”

They might—or might not—agree, but if you come across professionally, and you ask multiple writers who are not too far above you on the food chain, it is likely you will eventually get a “yes.” When you do, an unspoken assumption is that you will bring in the idea—and that it will be a strong one. It is unlikely that a hit writer will offer one of their best lyric or melodic ideas to a collaborator who does not yet have a track record to match theirs.

Writing up can be a great way to get a boost as you climb the ladder to success. So … stockpile your best lyric and melodic ideas, network, present yourself in a professional manner, and write your way up to a hit!