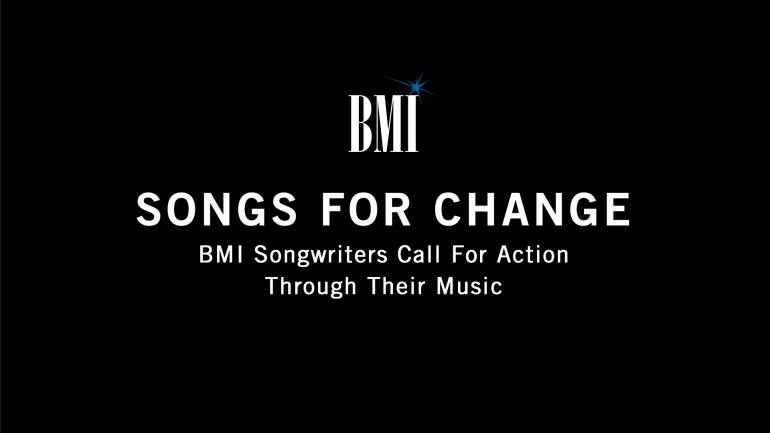 With the movement for racial justice and equality sweeping the country, BMI songwriters are picking up their pens and calling for much-needed change through their music. Issues of social justice, racial equity, tolerance and beyond are being highlighted in powerful songs that are shining a light on what’s happening and resonating with listeners. This builds on the long tradition of music driving social change, from classic songs like “A Change is Gonna Come” by Sam Cooke and “What’s Going On?” by Marvin Gaye, to “Fight the Power” by Public Enemy and “Alright” by Kendrick Lamar, all which carry strong messages of protest and overcoming struggle and injustice. Today, BMI songwriters are using their talent and creativity to seize this moment, speak out and call for the change that is long overdue. Here, we are starting off with just a selection of those songs, with more to be added. Below are links to the videos, as well as a Spotify playlist with currently available songs.

“Bigger Man” is the latest single from singer/songwriter, Joy Oladokun, and puts a spin on the old adage of “being the bigger person.” Co-written by Oladokun, Maren Morris, and Laura Veltz (fun fact: they wrote the song on the very first day they met), “Bigger Man” ponders what it means to take the high road when others are not expected to do the same, with lyrics like “I’ve turned sticks and stones into an olive branch / I’ve made a full house of a s***** hand / Here I am, still gotta be bigger than the bigger man.”

GRAMMY nominee, Mickey Guyton, released an updated version of her song, “Black Like Me,” featuring a gospel choir to back up her powerful vocals. The message of strength remains the same, and Guyton continues to demonstrate the importance of unity. “I would not be here in this moment without my Black brothers and sisters,” she said. “I stand in this moment because we all share the same story.”

Originally released in summer 2020, Ruth B.’s “If I Have a Son” is a touching tribute to the singer/songwriter’s future child. Laden with her hopes for them to be brave, safe, and strong, the track was a way for Ruth to cope with her feelings of sadness and disconnection in the wake of George Floyd’s death. In February 2021, the song was re-released featuring guest vocals from The Harlem Gospel Travelers, adding new dimension to an already-poignant message. Speaking with Complex magazine, Ruth B. says, “This is a song I’ve always wanted to write.”

BMI rapper and activist, Common, is joined by Black Thought for this timely track about turning struggle into success. With callouts to Black icons like Ron Finley, Malcolm X, and Nelson Mandela, “Say Peace” acknowledges the past while fighting for the future.

“A Beautiful Noise” by Alicia Keys and Brandi Carlile

Alicia Keys and Brandi Carlile teamed up with an all-star roster of female songwriters including BMI’s Brandy Clark, Linda Perry, Lori McKenna, and Ruby Amanfu for this song that is as timely as it is powerful. The track encourages unity and strength in the face of uncertainty with lyrics like “You’ve got to put one foot in front of another / with a hand in a hand holding on to each other.”

“Show Them the Way” by Stevie Nicks

BMI Icon Stevie Nicks wrote this new release back in 2008 but has kept the song to herself until now. “This was the time,” she says, noting that it is non-partisan and meant to be a moment of peace for everyone. Featuring fellow BMI songwriter Dave Grohl on the drums, “Show Them the Way” is based on a dream Nicks had some 12 years ago. Says Nicks, “I understood what it meant then and what it means now.” Filmmaker Cameron Crowe directed the music video for the track, which is also available for streaming.

“Hold On” by Yola, Natalie Hemby, The Highwomen, and Sheryl Crow

Yola teams up with BMI songwriters Natalie Hemby, The Highwomen, and Sheryl Crow on this new release. The song is described by Yola as her “call to the next generation of Black Women. Take up space. Be visible. Show what it looks like to be Young, Gifted & Black.” Crow plays piano on the song, while BMI writer Jason Isbell plays the guitar. Some of the proceeds from sales/streams of “Hold On” will go to MusiCares and National Bailout.

“Better Than We Found It” by Maren Morris

BMI singer/songwriter Maren Morris, along with fellow BMI songwriters Jessie Jo Dillon and Laura Veltz, co-wrote her new single—which she describes as a “protest song”—to acknowledge the responsibility we must all take to fight injustice and create a better world for future generations. The music video shows stories of families affected by police violence and immigration interspersed with footage from this year’s protests.

Singer/songwriter, Tré Burt, is joined by Leyla McCalla, Allison Russell, and Sunny War for this powerful song, written in response to the murders of George Floyd and Breonna Taylor. The Sacramento native worked with producer, Karlos Rene Ayala, to shoot the music video remotely using iPhones.

BMI singer/songwriter Teyana Taylor juxtaposes this slow-burning track about love and heartbreak with a powerful video featuring past and current footage depicting years of racial injustice. Taylor herself also pays homage in a unique way, and shared on Instagram, “We are STILL emotional. We STILL keep fighting for love [and] justice. Yet we STILL keep losing our beautiful Black lives.” The song appears on her latest project, The Album.

This Jac Ross song was released in January of this year, but its powerful message has grown even more crucial in the time since. Like “Still” by Teyana Taylor, the video for “It’s OK to be Black” amplifies the message of the song by highlighting Black activists, entertainers, and icons. We’re also shown images of those we’ve lost to gun and police violence, as well as important historical moments of desegregation and protests. Together, the song and video remind listeners to keep fighting for equality and that Black voices are vital to every facet of our culture.

BMI songwriter Sebastian Kole co-wrote this moving track with Alicia Keys, whose tragically beautiful vocals tell heartbreaking stories of those who left us too soon. “Another king and queen lost / Another broken promise they refuse to make right,” mourns Keys while displaying paintings of Breonna Taylor, Sandra Bland, and George Floyd, among others, on the cityscape behind her as she sings.

Terry Ellis (of the group En Vogue) shares her thoughts on racism, media bias, and the enduring strength of Black women in America. Through her song, Ellis expresses anger at how Black people have been—and still are—treated in our world, and how systemic racism continues to negatively impact Black Americans. The track was written by Eddie Serrano, Gregg Pagani, and Lance Tolbert, all of whom are BMI songwriters.

“The Healing” by Jody Watley and RedTop

BMI affiliate Jeff Gitelman co-wrote and produced this vulnerable song lamenting the struggles that have led to this year’s uprising. Usher addresses the need to change what is happening in the world and expresses hope for a future that will see all of us standing together in solidarity.

Co-written by BMI’s Martin McCurtis, “Mr. Officer” addresses police brutality head-on, with the vocalists asking a police officer, “What if that was my dad? What if that was all I had?” The song reminds us that all those—particularly Black men and women—lost to unnecessary gun violence in America were and always will be deserving of respect, love, and justice.

BMI songwriter, John Legend, sings about the importance of love and the power of perseverance over a hopeful, piano-driven melody.

Though another version of this song has already been featured on our Songs for Change playlist, this re-working of Keedron Bryant’s “I Just Wanna Live” features singer Andra Day and rappers Lucky Daye and IDK. The song’s guest artists expand on the original’s message with timely references (“Bumpin’ this Teyana Taylor / Thinkin’ ‘bout Breonna Taylor / How can my genetic makeup make it so I never wake up?”), while Day adds an important female perspective to the poignant track.

This country track tells the story of growing up Black in America, reminding listeners of the painful realization that Black Americans must often work twice as hard for half the reward. Impeccable, honest songwriting, a catchy hook, and Guyton’s sweet vocals underscore her hope for the future. “Black Like Me” encourages us to consider life through another’s eyes.

Singer/songwriter Felixx gets straight to the point on this mid-tempo R&B track: “It’s hard out here for a Black man.” The song addresses everything from family to incarceration, from protests to the treatment of women (and much more). Ultimately, Felixx encourages listeners to remain strong in the face of constant tragedy.

Gospel legend BeBe Winans delivers a stirring look at the BLM movement, lending his soaring voice to a call for understanding and empathy.

“Wake Up Call (Black Like Me)” by John Ellison

Written by the renowned 78-year-old singer/songwriter responsible for “Some Kind of Wonderful,” by Grand Funk Railroad, John Ellison’s “Wake Up Call (Black Like Me)” takes a personal story and turns it into a powerful anthem.

“I Can’t Breathe” by recent BMI signee H.E.R. is a soulful and sobering look at the violent injustices endured by Black communities across the country.

“I Can’t Breathe” by Deitrick Haddon

Gospel singer/songwriter Deitrick Haddon recounts the murder of George Floyd in this heart-wrenching track, “I Can’t Breathe,” which calls for empathy, understanding and solidarity.

Meant to inform and inspire, Anderson .Paak’s “Lockdown” takes a stand with those participating in protests across the nation for urgent change.

“Song 33” by rapper Noname takes an honest look at the current state of the U.S. and the need for racial justice.

“Snow On Tha Bluff” by J.Cole

J.Cole’s “Snow On Tha Bluff” speaks to crucial issues of racism, activism, police brutality and more in this compelling single.

The genre-straddling BMI songwriter asks that we look beyond our differences and recognize each other as parts of a single entity.

“How Many Times?” by Trey Songz

The BMI singer/songwriter speaks to the pain of recurring injustice in an impactful, emotional track.

The rising Gospel singer/songwriter shines a light on the damage people inflict on each other in this powerful single.

An impactful call to action, “Stand Up” was created by Rage Against the Machine/Audioslave guitar hero Tom Morello, Imagine Dragons front man and songwriter Dan Reynolds, R&B singer/songwriter/activist Shea Diamond and Italian electronic duo The Bloody Beetroots. 100% of the artists’ proceeds from “Stand Up” go to the NAACP, Know Your Rights Camp, The Southern Poverty Law Center and the Marsha P. Johnson Institute.

Philly-born singer/songwriter Brayton Bowman turns an open plea for awareness into an R&B/pop anthem for standing up and speaking out.

“Ride For Me” by Travis Malloy

The Pittsburgh singer/songwriter/producer delivers a moving tribute to the late George Floyd with a hopeful message of encouragement and change.