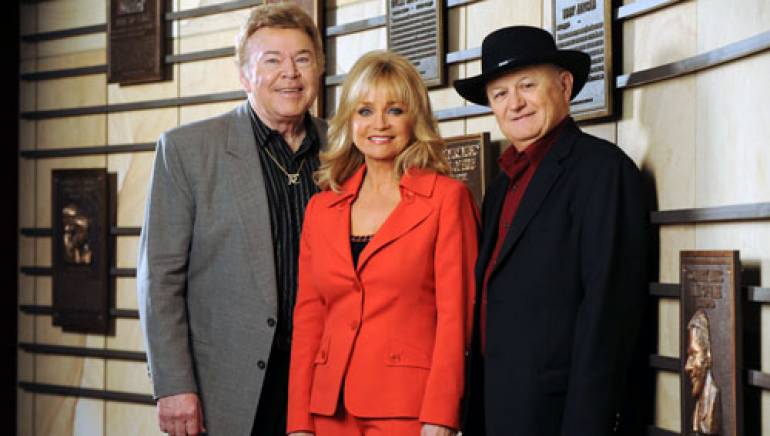 The Country Music Association recently announced that longtime BMI affiliates Roy Clark and Barbara Mandrell will join the Country Music Hall of Fame’s hallowed ranks this year. Clark will enter the hall in the “Career Achieved National Prominence Between World War II and 1975” category, while Mandrell will be the fifth artist inducted in the “Career Achieved National Prominence Between 1975 and the Present” field, established in 2005. Perhaps best known as the co-host of legendary television series Hee Haw, Roy Clark orchestrated a prolific career that has spanned decades and media formats. In the 1950s, Jimmy Dean handed Clark the reins to his Washington, D.C.-based television show Town and Country Time, and Clark’s reputation as a witty and engaging entertainer surged. With an affable disposition only matched by his considerable musical chops, Clark enjoyed an array of gigs, including band leader for Wanda Jackson, must-see Las Vegas entertainer, and feature film actor. Along with Buck Owens, Clark was tapped to co-host Hee Haw in the late 1960s. The next decade brought a substantial chain of top ten charting successes for Clark as a recording artist, including “Thank God and Greyhound” (1970), “The Lawrence Welk-Hee Haw Counter-Revolution Polka” (1972), “Come Live With Me” (1973), “Somewhere Between Love and Tomorrow” (1973), “Honeymoon Feelin’” (1974), and “If I Had It to Do All Over Again” (1976). A Grammy winner who also boasts seven CMA Awards, he earned a star on the Hollywood Walk of Fame, signifying his broad appeal. Clark remained Hee Haw’s anchor until the show’s conclusion in 1992, never missing a single episode.

Texas native Barbara Mandrell enthralled the American public through television, a best-selling autobiography, and bonafide country music superstardom. Born into a musical family and the ultimate product of a family band, she began performing as a child. With hits including “Playin’ Around with Love” and David Houston-duet “After Closing Time” already under her belt, she joined the Grand Ole Opry at the tender age of 23. In one year, she earned her first chart-topper, “The Midnight Oil,” which she followed with consecutive no. 1 smashes “Sleeping Single in a Double Bed,” “(If Loving You Is Wrong) I Don’t Want to Be Right” and “Years.” Throughout the 70s and 80s, Mandrell dominated the charts, returning to top them again with hits “Till You’re Gone,” “One of a Kind Pair of Fools,” and her signature jewel, “I Was Country When Country Wasn’t Cool.” In 1980, she partnered with her sisters Louise and Irlene to create television variety program Barbara Mandrell and the Mandrell Sisters, which went on to garner a combined 11 Emmy and Golden Globe nominations. She took home her first CMA Entertainer of the Year trophy the same year, and in 1981, she became the first artist ever to win Entertainer of the Year two years in a row. Mandrell also boasts two Grammys, countless television special and acting credits, six American Music Awards, and a spot in the Country Gospel Music Hall of Fame.

Roy Clark and Barbara Mandrell will formally enter the Country Music Hall of Fame at the official Medallion Ceremony, slated for later this year. For more information regarding the Hall of Fame and comprehensive biographies of the inductees, please visit www.countrymusichalloffame.com.