Posted in MusicWorld on December 1, 2011 by Latifah Muhammad 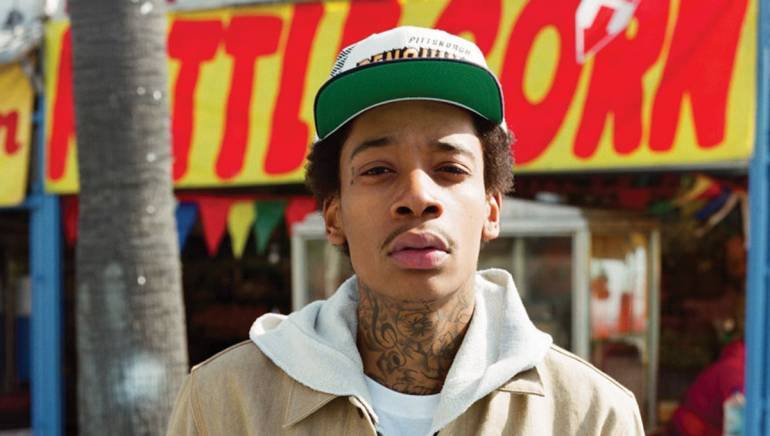 In just one year, Wiz Khalifa went from underground mixtape king to top-selling rapper. The Pittsburgh, Pennsylvania native’s infectious single “Black and Yellow” reached stadium status with a performance at this year’s Super Bowl. When all eyes and ears turned to him, Khalifa stared right back and held the country’s attention, the 23-year-old MC’s tattered image evoking rock-star lifestyles of yesteryear. He quieted the naysayers, embraced the haters and mobilized the Taylor Gang crew, pushing his Atlantic Records debut Rolling Papers to gold-selling status.

When working on his hits, Khalifa’s writing inspiration comes from the music itself. “With ‘Black and Yellow,’ I heard the beat, locked in the loop, and the song just grew from there,” he told USA Today earlier this year. “That’s how I approach all my music. I never write from concept. The beat is the beginning, and then I fill in the rest of the song into what it should be.”

Born Cameron Jibril Thomaz, Khalifa began his career in grade school, writing music at the age of 8, putting out his first album by 13 and hooking up with manager Benjy Grinberg and signing to his Rostrum Records label imprint by the time he turned 17. A certified “army brat,” Khalifa was born in North Dakota and lived in Japan, Germany and England with his family before settling in Pittsburgh. Being the new kid on the block proved to be encouraging for Khalifa’s budding career.

“Living all around helped me mature and put myself out there as the new guy,” he told GoEerie.com’s Dave Richards in 2008. “I was used to being the new dude, so it was nothing for me to get in front of different types of people I didn’t know and just be myself.” Cultivating an interest in the arts at such a young age, Khalifa adopted the name “Wiz,” short for his wise-beyond-his-years skills and “whiz kid” status. He added the last name Khalifa, which is Arabic for successor.

By the time he was a student at Taylor Allderdice High School, Khalifa had released his first mixtape, Prince of the City: Welcome to Pistolvania, and caught the ear of the mainstream, leading Rolling Stone magazine to name him “an artist to watch” following the 2006 release of his debut album Show and Prove. The next year, Khalifa signed to Warner Bros. Records and dropped his first single, “Say Yeah,” which peaked at no. 25 on the Billboard Rhythmic Top 40 chart. As his Internet star continued to rise, due in part to the popularity of social media and Khalifa’s confident harnessing of it, he gained his footing amidst a plethora of new school MCs all vying for the top spot in hip-hop. His Kush & OJ mixtape was the toast of Twitter, becoming the top trending and search topic on both the social networking site and Google upon its release in April of 2010. The added attention helped Atlantic Records take notice, and Khalifa officially announced that he had signed with the iconic label in July of the same year. Khalifa got to work on his first album for the label, penning all of the songs himself. When the Stargate-produced “Black & Yellow” hit airwaves last September, he had officially arrived.

“Black & Yellow” made its way to the top of the Billboard Hot 100 and went on to sell three million digital copies. Rolling Papers was released on March 29 of this year and spawned another hit, “Roll Up.” To date, Rolling Papers has sold over 500,000 copies worldwide and is well on its way to solidifying Khalifa’s place among hip-hop’s elite.

A graduate of small venues around the country, the Taylor Gang leader now commands stages all over the world. At the recent BMI Urban Awards in Hollywood, Khalifa helped pay tribute to the newly crowned BMI Icon Snoop Dogg, delivering “Nuthin’ But a ‘G’ Thang” with veteran finesse. Rubbing shoulders with other tribute performers, including Nas, Warren G, Too $hort, the Gap Band’s Charlie Wilson, Bootsy Collins, Dr. Dre and the Doggfather himself, Khalifa was surrounded by giants — and very much at home.

Latifah Muhammad is a Los Angeles-based entertainment journalist. Her work has appeared on AOL.com, Allhiphop.com, GlobalGrind.com, and more.