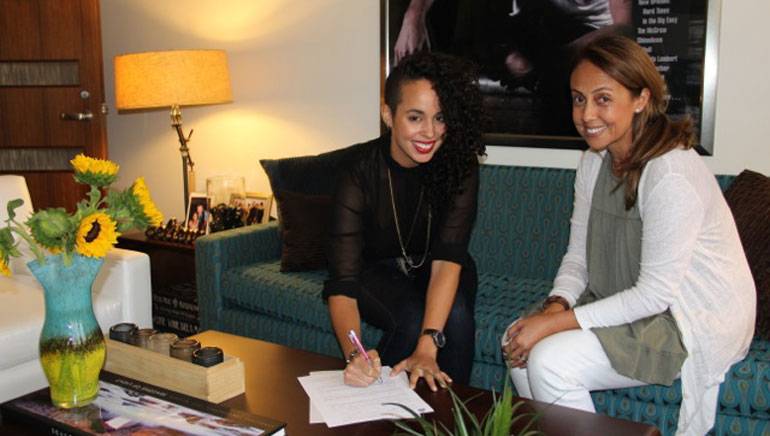 Broadcast Music, Inc. is proud to announce that Raquel Sofia has signed with BMI for representation of the public performances of her music. The talented Latin singer-songwriter has performed with the likes of Juanes, Shakira and Prince Royce, and has found her own success with undeniable cross-genre appeal.

Hailing from Puerto Rico, Sofia first broke into the scene by recording vocals with Latin superstar Juanes on MTV Unplugged, a performance that won him both a GRAMMY and two Latin GRAMMYs. In 2013, her infectious, indie sound was chosen as the voice of the Target summer campaign, singing her own version of Illya Kuryaki and the Valderramas’ track “Ula Ula.” Shortly afterwards, her single “No Me Importas” was chosen as one of NPR’s top favorite songs, making hosts Felix Contreras and Jasmine Garsd sit up and take notice: “We found a bona fide future star in Raquel Sofia.” That same year, she toured the world singing backup vocals for Shakira, performed with Juanes at the Latin GRAMMYs, Latin Billboard Awards, Premios Juventud and the GRAMMYs, and opened for the Juanes Loud and Unplugged U.S. tour for 30 dates.

With a whirlwind schedule, she still makes time for songwriting, having penned tracks for the latest Ednita Nazario album and the upcoming Juanes album. Now signed to Sony Latin and Warner Chappell Latin Publishing, Sofia is currently working on a debut album. Later this year, she will perform on The Tonight Show with Jimmy Fallon and the U.K. edition of The Voice.

Ever an entertainer, Sofia also keeps a video diary on YouTube called Crónicas de Una Niña Tonta, which translates to Chronicles of a Silly Girl. Considering her climb to stardom, the self-proclaimed “silly girl” has the smarts and talent to ensure a bright future.