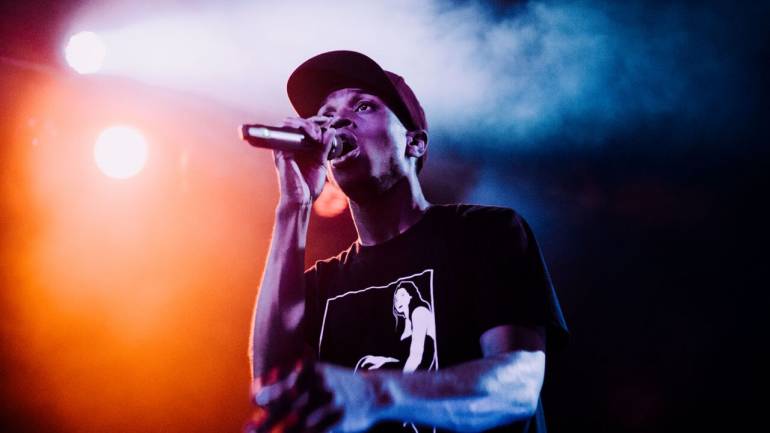 If rapper Pell has to be known for any one thing, it’s pushing boundaries. Both his lush 2014 debut, Floating While Dreaming, and his newest album, Limbo, explore existential themes of consciousness and emotion — his lyrics reflecting a deliberate intention to spread positivity and good. That’s all irresistibly packaged in a gamut of styles, including electronica and Latin-jazz funk, the latter heard on his intoxicating new single “Queso.”

Growing up in the sonic wonderland of New Orleans exposed Pell to a big palette; being raised on pioneers such as Stevie Wonder and A Tribe Called Quest informs the rich complexity heard in his songs. Now, Pell cites indie bands including Vampire Weekend and Kings of Leon as inspiration, and that expansive, boundary-pushing approach to hip-hop is part of what’s made him a favorite among diverse fans who’ve seen him at SXSW and on tour in New York, Los Angeles and Europe. He sings, produces, directs and aims to write for TV too – making him a quintessential 21st century renaissance man.

BMI recently caught up with Pell to dig deeper inside his beautiful mind.

You’re part of a new hip-hop generation, yet recall the best of early ‘90s groups like Pharcyde. What’s your favorite era of hip-hop and why?

My favorite era of hip-hop is right now. People are creating more than ever before - everything we need to make a “classic” is at our fingertips. I think that we’ve seen so many artists before us pave different lanes that there’s no real instructions as to what makes a rap song great. We all access our different influences and backgrounds to create things that can be shared throughout the world and appreciated.

You’ve said your influences include Stevie Wonder and A Tribe Called Quest. How’d you gain an appreciation for music before your time?

Because of my parents. My mom would always be playing some MoTown and my dad was constantly playing jazz. I became a fan of Tribe because of how their samples made me feel. As I grew older, so did my appetite for things that were before my time. I wanted to see where I fit in the bigger picture of being an artist that can impact millions over time.

FADER called your music Dream Rap; your new album is entitled Limbo. How much are you into psychology and/or meditation? How do those disciplines influence your songwriting process?

I used to be heavily into mediation and a few of my friends studied psychology in college. My mom actually helped with the creation of the Latasha Norman Center at Jackson State University while she worked as a school psychologist/therapist. It’s safe to say I’m in tune with my feelings. They influence my records; I feel like the easiest way to express abstract feelings or emotions that you can’t effectively communicate in every day conversation is on wax.

How did growing up in New Orleans affect you as a person and as a musical artist? What about Mississippi? Does your physical environment impact your music at all?

Your lyrics and online persona lean towards the inspirational and positive. Do you feel a sense of responsibility in what you put out? Do you have an opinion on the state of hip-hop?

Yes. I’ve been given a talent and a voice. I would like to be able to use it for good since I can help it. People want to feel good or at least related to, but most of all, they want to feel hopeful. That’s where I come in.

How do you use social media as it relates to your career?

I use it to engage with people who may not know my story. It’s my way of telling them who I am, and it helps me bring them along my journey day by day so they can see my dreams manifest.

What would people be surprised to know about you?

That I can golf.

How has signing with BMI affected your career?

BMI has been very helpful in understanding a little bit more about how the music business works and how to collect money for songs that I create, as well as perform. It’s very important to an independent artist, like myself, to get revenue from wherever I can because this isn’t a hobby, this is my bread and butter.