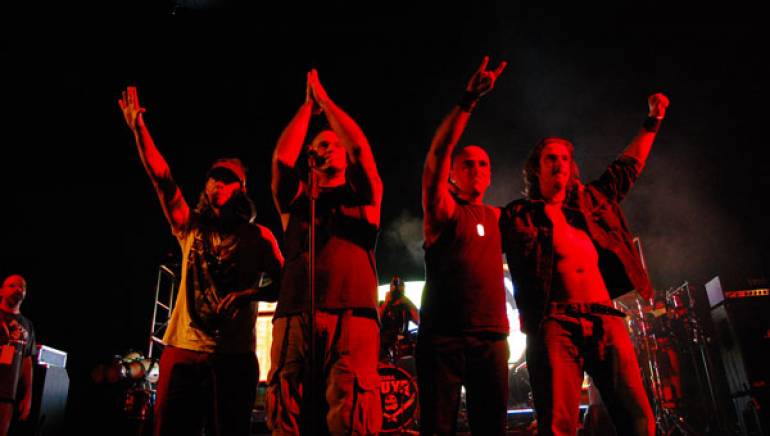 Ramon Ortiz is going back to his roots. The leader and guitarist of famed Latin metal group Puya is not only reuniting with his band members after 6 years: He is infusing his compositions with more Puerto Rican flavour than ever.

In the late 80s, many young musicians in Puerto Rico wanted to be the next White Snake. But Ortiz and high school friend Harold Hopkins wanted to experiment. “I was tired of copying stereotypes. I wanted to mix genres and practice all the funk, blues, jazz and ska I was studying,” says the Los Angeles-based Ortiz. “It was very crazy and weird but for some reason people liked it.”

With the addition of drummer Ed Paniagua and singer Sergio Curbelo, the band transformed into Puya, which has two meanings: it’s a sharp point or a spear, but Puya is also a cup of strong black coffee—without sugar.

Puya relocated to Ft Lauderdale in 1992, and fused more Latin elements such as salsa with death metal and hardcore. Many years of hard work paid off, and in 1996, Puya played at Rock al Parque, the biggest rock festival in South America. Then, the band released Fundamental, produced by the legendary Gustavo Santaolalla.

Non-stop touring, including playing Ozzfes, and opening for Red Hot Chili Peppers in South America, resulted in an overdue hiatus. Ortiz started the band Ankla, a denser metal band with English lyrics. For the past 5 years, he’s also played the traditional cuatro guitar in the bomba y plena group LA Plena, the first of its kind in Southern California. “It’s been an opportunity to study Puerto Rican jibaro [country] music, and now it’s trickling down to my compositions,” says Ortiz of the experience.

In May 2009, Puya reunited at the Stereo Music Fest in Puerto Rico, and immediately, the four got together to write and record again. A new EP, “Areyto,” will be out this summer and includes four new songs. A live concert DVD originally shot in 2002 and directed by Hopkins has finally been released.

After 14 years, Puya returns to Rock al Parque this July 4, with more dates to be announced. “We’ve all matured as musicians, and the biggest change has been the boricua [Puerto Rican] factor,” says Ortiz. “More than ever, our music is geared towards our Puerto Rican fans.”