Posted in MusicWorld on November 9, 2010 by James Wells 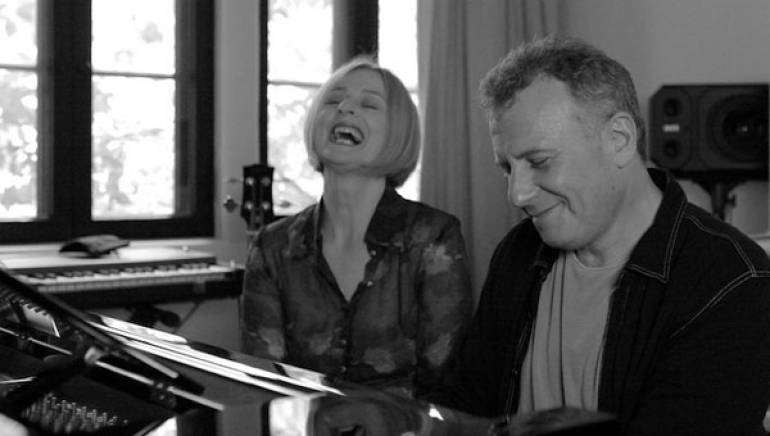 How Paul Reiser has time for interviews is a mystery. He currently has major projects coming out in almost every conceivable artistic medium—a new television series bearing his name, new book Familyhood, and now Unusual Suspects, a musical collaboration with renowned singer/songwriter Julia Fordham, which the two composed together and which features him on piano.

One half expects to walk outside and see him signaling a novel entirely in semaphore.

Reiser has a college degree in classical piano, and his recent foray into composing prompts both nostalgia and wonder. “I always had it in my head that [a career in music] was the plan,” he says. That is, until he was side-tracked by a couple of little projects that kept him occupied for decades.

The return to his plan was by degrees timid and only worked because it had no goal in sight. “I gave myself license [to write anything], even if it was only a fourteen second piece,” Reiser says. Teaming up with Fordham was equally fortuitous, the product of a rare moment of temerity that led him to show her his compositions. Reiser’s quick to credit Fordham with deepening the artistry of his initial creations. For example, of the piece that became “Minefield,” Reiser reveals, “I thought of the piece as a lullaby, but she came back with a meditation or a prayer,” one stuck on the quandary of how to tell a child, “ The world’s not only beautiful / After all? / It’s a minefield at best.”

The result of their partnership has a maturity that gives the lie to any preconceptions of dilettantism on Reiser’s part. And maturity really gets to what’s at the heart of the album. Reiser says the album’s complexity “doesn’t fit neatly into any category. It’s very adult.” And he’s right. The work is decidedly sophisticated in music and arrangement as well as in both the content and the artistry of the lyrics. The song that people are most likely to hear first, “Unsung Heroes,” is a catchy and moving tribute not only to the soldiers who put their lives on the line but to those close to them who must struggle with the worry and loneliness such occupations bring.

The accomplishment these two artists are capable of bringing forth is evident in “Fine.” Both the drivingly mordant instrumentation and poignantly insistent lyrics in this track drip with the peculiarly delicious irony of protesting too much. When the voice in “Fine” declares, “I’ll be Fine, you’ll see,” she comes across as credible because the song doesn’t confuse being fine with being happy.

Of his own future plans in music, Reiser says simply, “I’d love to write another batch of songs with Julia.” Given his endearing tendency toward understatement, that batch should heft like a bushel.