Posted in MusicWorld on March 24, 2006 by Rob Patterson 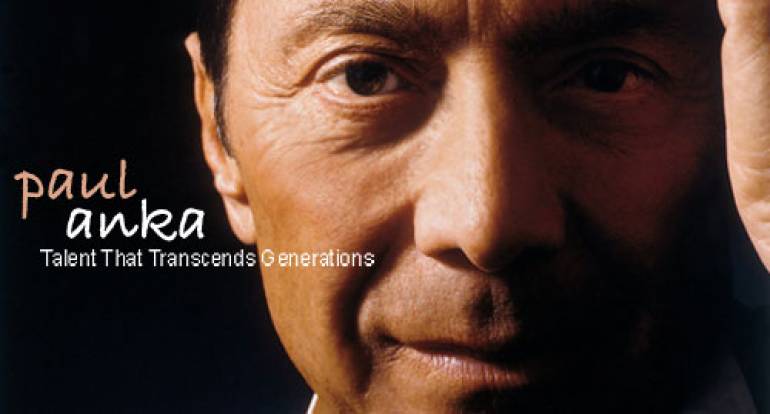 For proof of Paul Anka’s continuing versatility, vitality and relevance as a pop music icon, look no further than his new release, Rock Swings. On it, the 64-year-old singer and composer covers songs by such unlikely acts as Nirvana (“Smells Like Teen Spirit”), Oasis (“Wonderwall”), R.E.M. (“Everybody Hurts”), Soundgarden (“Black Hole Sun”) and Billy Idol (“Eyes Without A Face”), albeit alongside some seemingly more apropos numbers as Lionel Ritchie’s “Hello” and Eric Clapton‘s “Tears In Heaven.”

On the album, he proves that Tin Pan Alley now travels through some new territory and reasserts the notion that a great song can be dressed in many styles. “There were some great songs written in the ‘70s, ‘80s, and ‘90s,” notes Anka, who also stresses that swing music remains a viable mode. “The fashion of that era hasn’t gone away—Vegas, Sinatra, all of that kind of stuff.”

On Rock Swings, he blends what at first glance may seem like disparate elements into one of the more groundbreaking albums of what is closing in on a 50-year career.

And if anyone knows what makes for a good song, it’s Anka. In 1957, he emerged at the age of 16 from Ottawa, Ontario to score a No. 1 hit with “Diana,” which went on to sell 20 million copies worldwide. By the time he was 18, Anka had five more Top 5 songs to his credit, including another No. 1, “Lonely Boy.”

The hits launched a career as a recording artist, entertainer, songwriter and actor for Anka. With some 900 songs to his credit, he has enjoyed more than 150 million plays and 60 million copies sold of his compositions. Some of the many artists who have recorded Anka songs are Elvis Presley, Barbra Streisand, Tom Jones, Linda Ronstadt, The Sex Pistols, Nina Simone, Gypsy Kings and Robbie Williams.

He helped launch Donny Osmond’s singing career with the No. 1 song “Puppy Love,” provided Buddy Holly with his biggest (and sadly posthumous) hit, “I Guess It Doesn’t Matter Anymore,” and penned Frank Sinatra’s signature song, “My Way.” Anka also co-wrote the theme to “The Tonight Show,” which has been performed over 1.4 million times, earning him the Classic Contribution Award at the 2005 BMI Film/TV Awards.

Beloved in his native Canada, Anka is an international star who has recorded albums in Japanese, German, Spanish, French, and Italian. He composed the theme music for the film The Longest Day , which won Anka an Academy Award nomination, and he has also appeared in such movies as 3000 Miles to Graceland , Mad Dog Days and Captain Ron. And Anka remains busy as a performer, touring some 10 months out of every year.

Rated by Billboard as the one of the most successful artists in the magazine’s history, Anka is a truly global phenomenon. Odds are that if you have a pair of ears, you’ve likely heard something created or sung by Paul Anka.