Posted in MusicWorld on August 14, 2008 by Kevin Zimmerman 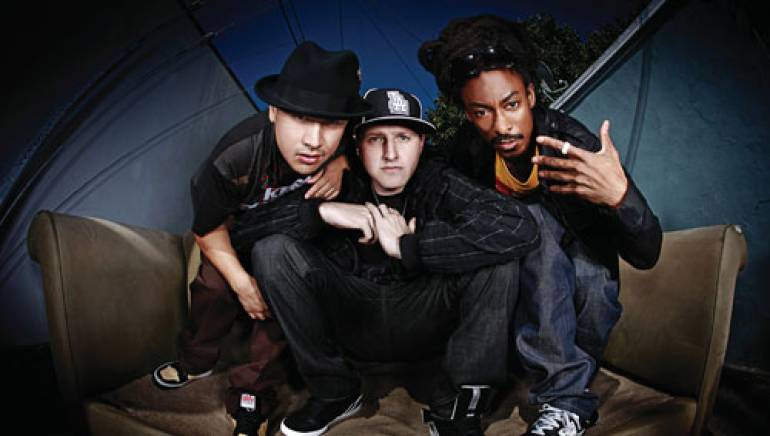 “Every single style of music is represented in what we’re doing,” affirms Marty James, who founded the group five years ago with MDA, a DJ who worked as a graphic artist and designer at the Beastie Boys’ Grand Royal label, and Z-Man, an underground staple MC from the Bay Area. “It’s just something that happened naturally. Different drumbeats send me in different directions. I’ll hear an old song and think what it was about it I liked, then try to make something with that same core energy.”

Audibly influenced by everyone from De La Soul and Cypress Hill to Steve Winwood and David Bowie, the group’s eclecticism never comes off forced; instead, it’s woven naturally into the trio’s tunes. Who else could get away with sampling the White Stripes for one song (“Mama’s Heart”) and invoking smooth ’80s-style r&b on another (the single “You Got Me”)?

“This is the perfect song for us as the first single,” James says. “It’s about trying to live up to your dreams, having these ambitious goals, but at the same time trying to keep your loved ones, your biggest supporters, those you’re closest to, at the forefront, knowing that you’re all in it together.”

“I thought it would be a good song in terms of getting us out there on a wider scale for people to hear,” says Z-Man, while MDA, whom James describes as OBR’s “backbone, the glue that makes everything come together,” adds, “It’s got the hint of an ’80s ballad to it, a mix of r&b and hip-hop.”