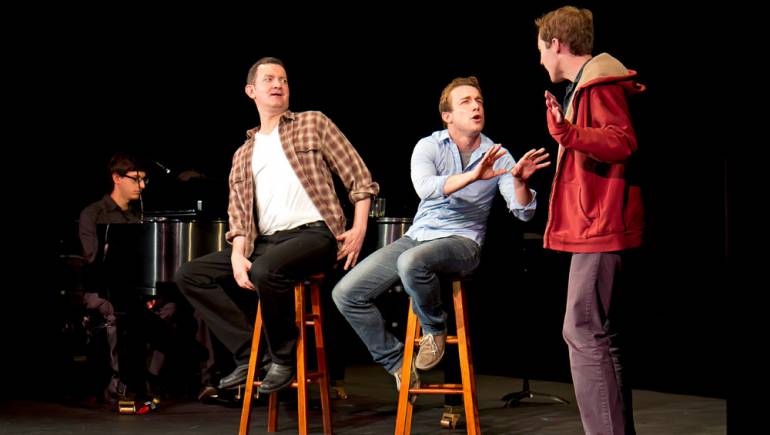 Musical theatre enthusiasts eager for new offerings from bourgeoning songwriters were treated to a smorgasbord of songs at the BMI Lehman Engel Musical Theatre Workshop biannual showcase, held November 3 at the Marjorie S Deane Little Theatre in New York. The showcase, presented in association with the Musical Mondays Theatre Lab, featured 14 new songs from a crop of lyricists and composers who are members of the Workshop, deemed “the Harvard of musical theatre” by the New York Times.

The showcase began with a performance by Jill Abramovitz, who sang “Christmas Without You,” a selection from Joyce to the World, composed by Kellen Blair. Next, attendees were treated to two performances from The Good Girl, written by Mary Liz McNamara, who also sang that evening.

The intensity of the performances and high-caliber display of songwriting continued with selections from Touched, created by book writer/lyricist Charlie Sohne and composer Matt Van Brink; Drive, conceived by composer Andy Monroe, with a performance of “Prom Night” by Raissa Katona Bennett and Jeannine Frumess; Love in the Age of Therapy, spawned by composer Beth Falcone; The Double-Threat Trio, represented with a performance of “ A Singer Prepares” by Sara Wordsworth; The Dogs of Pripat, created by book writers Leah Napolin and Jill Abramovitz, composer Aron Accurso, and lyricist Abramovitz; The Suicide, highlighted with two songs by book writer David Bridel, composer Simon Gray and lyricist Raymond Bokhour; Take One, conceived by composer Jeff Ward; and Flambe Dreams, represented with a performance of “ Everything You Long For” by Ashley Fox Linton and Matthew Hardy.

The showcase was produced for BMI by Patrick Cook and Frank Evans, and directed by Igor Goldin.

BMI’s Lehman Engel Musical Theatre Workshop has helped develop top talent for half a century. Lyricists and composers behind award-winning productions such as A Chorus Line, Little Shop of Horrors, Nine, Once On This Island, Ragtime, Avenue Q, Next To Normal, and The Book of Mormon are members of the workshop, which received a special Tony Award in 2007 and a Drama Desk Award in 2006.